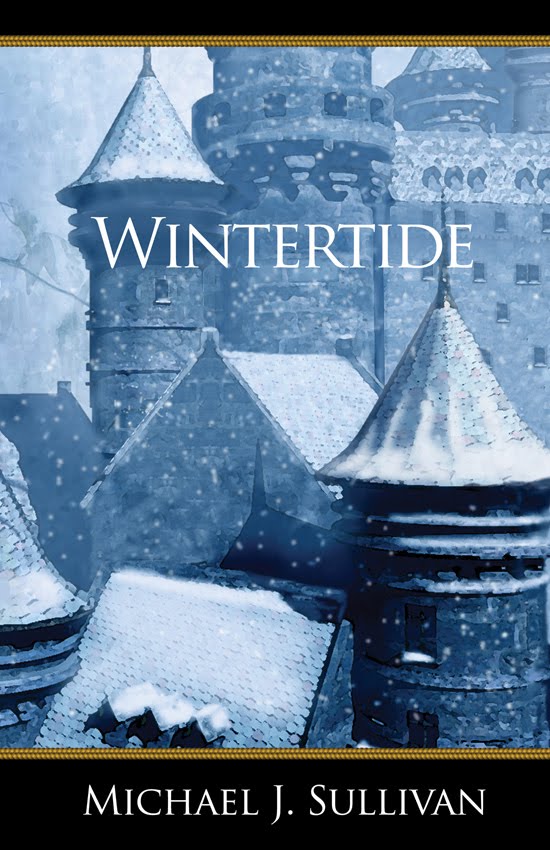 A FORCED WEDDING. A DOUBLE EXECUTION. TWO THIEVES HAVE OTHER PLANS.

The New Empire intends to celebrate its victory over the Nationalists with a day that will never be forgotten. On the high holiday of Wintertide the empress will be married. Degan Gaunt and the Witch of Melengar will be publically executed. Then the empress will suffer a fatal accident leaving the empire in the hands of the new emperor. It will be a perfect day. There is only one problem-Royce and Hadrian have finally found the lost heir.

Talk about setting up the finale.

Michael J. Sullivan’s 5th book in the Ryria Revelations series doesn’t only set up the finale, but does so with an unforgettable third act that contained ALL the best things about this series in one section.


WINTERTIDE is for lack of a better word, incredible. It is an achievement that not only can Sullivan be very proud of, but one that could easily satisfy the toughest of critics. Not that he really needs to do so with the series being quite well-received at this point, not to mention and having done so with five books on the table which is impressive.

My job as a reviewer is to attempt to tell you about this book, without spoiling anything. I am pretending some folk who read my review will not have even read the first one yet (though you should, it is staggeringly awesome and fun!), and that’s a tough request seeing as we are five books in here and I have to avoid big story spoilers. I will do my best.


WINTERTIDE picks up fairly soon after book 4 THE EMERALD STORM. Aquesta is starting to fill with holiday revellers, and the schemers in the palace are preparing to marry puppet Empress Modina off, and execute the two biggest thorns in their side (Princess Arista of Melangar and rebel leader Degan Gaunt). Hadrian Blackwater, guardian of the heir of Novron is doing his level best to do the right thing and free the imprisoned, whilst his partner is fleeing north back to the charred remnants of sacked Melangar in the hopes that his one true love Gwen is safe and escaped to the Winds Abbey. Neither is initially aware of Arista having been captured and imprisoned by Saldur and Luis Guy.

That’s where we start, but it is FAR from where we end up. What a rollercoaster!! Hadrian’s journey takes him in a very interesting direction with an ultimatum that will either compromise his own valor and honour, or cost him the life of someone dear to him. Royce starts to experience good tidings from some of the good things he’s done in his more recent past and it kind of astounds him. Arista is doing her best to not give Modina up to Saldur as her help in infiltrating the palace, but the evil bishop is becoming such a dirty, filthy creature in his threats that it tests her as well.

Myron. Oh Myron. You can be on the page for like a half a chapter and you own it. Seriously Michael. Arista is probably my second fave, Royce and Hadrian are incredible, Saldur is deliciously evil incarnate, Alric and Mauvin are heroic...but Myron sir... is your masterpiece. From the minute he showed up in the first book to whenever you described him throughout the books he was not in I smiled from ear to ear. Now we get to see him again, and the newly constructed Winds Abbey, and the best goddamned new tree ever! Man that was nice to see. I actually cracked open the first book again and read that passage about the Squirrel tree again. Late in WINTERTIDE, Myron shows up again (falling off a horse) and once again the pen that sketches him out is deft and pulls at every heart string I have. Sorry, I know I go on an on, but Myron to me, represents the innocence in the world of Elan, and that’s always refreshing to read and experience in a world that has become decidedly war-torn and divided. It’s almost as if Sullivan is aware of how dark a lot of the paths have to be at this point in the story and Myron shows up to say “Hey, it’s not all bad I promise you, and we are going to make it better.”

There is a love story buried in these last few books that has been a lovely slow burn. We get snippets of it here and there and you can see it budding into something more but I don’t need to tell you how great it is to see an author spend the time (ie. More than one book) developing it into something that rings true of a worldly love that he can be proud of creating.

Modina finally comes into her own and shows those who think they keep her in chains how wrong they might just be. There is a revelation about just what she did with some of her time that I kind of slapped my head and went “Oh man! I can’t believe I didn’t realize that!”, and then her actions 3 chapters from the end are kind of series changing and I loved it.

Then we have the final 3 chapters. Oh. My. Gods.

I can’t even START to tell you how amazing the last three chapters of this book are. I can’t tell you cause I’d spoil stuff. Sufficed to say they knocked me right on my ass. My mouth was on the floor for like an hour, and I haven’t actually stopped thinking of the ramifications to certain characters and places. Let’s just say that as far as endings go, this is probably the best Sullivan has done yet in the series. Bar none. The revelations are fast and furious but it is the events of those last pages that will haunt you into the wee hours thinking about them, not to mention where they will take us...

...in APRIL! Dammit! Now I have to wait till the spring release of PERCEPLIQIUS to find out how it all ends! I haven’t been this excited about the concluding volume in a book series since probably Jim butcher’s final Codex Alera book FIRST LORD’S FURY.

Oh, and Michael, I actually pumped my fist in the air when Alric and Mauvin showed up. Not kidding. Haha!

This book is an absolute TRIUMPH. A true classic worthy of anyone bookshelf and hopefully years from now I’ll sit down and read them to my kids. I think I need to thank you for that sir. It is a seasoned storyteller who is able to weave such incredible tale that ties up a bunch of older plot threads and set us up for the final book with not just a cliffhanger, but the mother of all cliffhangers AND a promise for something really special in the future for the whole world and all the characters we know so well now.

I can’t recommend another series this year that has affected me like this one. It is worth every penny I spent on the first three books, late night online looking for new fantasy to read. I haven’t looked back since.
Posted by GunMetalBlue at 5:48 PM