Movie Review: The Chronicles Of Narnia: The Voyage Of The Dawn Treader 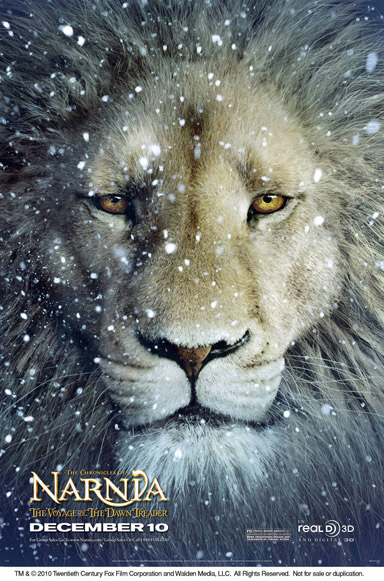 I thought THE CHRONICLES OF NARNIA: THE LION, THE WITCH AND THE WARDROBE, first film in the series was a little heavy-handed and a stuck a little too close to the book narrative. For me it came across not as a film series to compete with the splendid Harry Potter series, but a sort of poorer little brother. One people may initially pay attention to, but in the long run I doubt anyone is really going to remember it. Then the second film, PRINCE CASPIAN came along. It dropped a fair amount of the religious allegory that peppers ALL of C.S. Lewis’ work (not to mention the first film), upped the action and made it a tad darker with a decent villain and a WAY better soundtrack. I enjoyed that one A LOT more, and even though it didn’t do as well at the box-office, I felt that it had succeeded at being a viable and memorable film. Moreso than the first.
So, after Disney dropped as distributor due to CASPIAN’S underperformance in their eyes, Fox picked up the gauntlet and gave directorial reigns to Michael Apted.
I want to tell you that THE CHRONICLES OF NARNIA: THE VOYAGE OF THE DAWN TREADER was better than CASPIAN. Sadly, it isn't really. In fact, I’d even go so far as to say it doesn’t even succeed at being the first film. That’s not to do with any of the leads, as they all do a splendid job with the material they are given. I’d have to blame the script first and foremost, as it jumps around a lot and picks the wrong passages of the source material to follow making for an non-cohesive whole. There is no flow. Events happen but aren’t really connected smoothly and the result is a bit jarring to be honest. Secondly, the effects are sort of mid-90’s in quality. The Eustace-dragon in fact isn’t even as good as the Dragon invented for the 90’s flick DRAGONHEART. When we are talking like 15 years down the road and the dragons in the Harry Potter films were amazingly well-created like 5 years ago I expect more. It’s not like they had no budget either, it just seems like they skimped in the wrong area. Nice special effects might have gone a long way in helping this struggling failure.
Georgie Henley (Lucy Pevensie) and Will Poulter (Eustace Scrubb) both deliver great performances, while Skandar Keynes (Edmund Pevensie) less so as he comes across as a bit more childish even than his younger costars. Simon Pegg of course steals the show in the swansong of swashbuckling mouse character Reepicheep, and Ben Barnes is as good as he can be as King Caspian (reprising the role he played in the second film) who isn’t given a whole lot to do (which is sad because Barnes oozes the character so well).
Now, I’m not going to say much about the religious allegory, as my opinions may not be everyone’s, and I wouldn't want to offend. Basically they ramped up the religion and christian allegory and it sticks out like a sore thumb and I disliked it...but that's me.
Did I hate the film? No. It suffers under the weight of a poor script and bad choices about paths and flow. At times the dialogue suffers as well and feels kind of hackneyed and juvenile. My recommendation for it is that if you have ANY interest in seeing it, then do so on DVD or Blu-Ray, cause the 3D isn’t that great and the big screen will do nothing to improve it.
Posted by GunMetalBlue at 9:44 AM