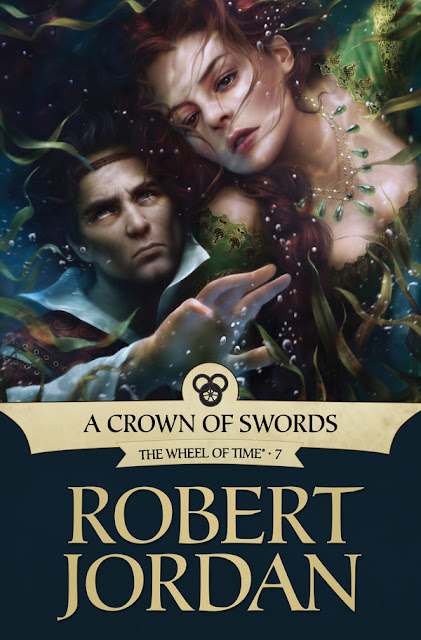 Seven books in and I am still not bored.

In fact, Robert Jordan’s A CROWN OF SWORDS was a nice character builder. Does a lot happen? That depends on your POV really. If you arte talking about moving people and the large cast of characters forward by adding depth and experience to them...then yes. If you refer to action sequences and badassery...then not really. That’s not to say there is no action, there is...but it is mostly backburner-ed for the character builds. Does that make it boring? Not at all! In fact, for me it made for a nice volume of watching character start to take themselves in directions far removed from the ones they set out on six books before. Rand continues his downward spiral into “I am the king, bow down to me...oh and I love three different women” arc. I can see Jordan plans to make us really dislike Rand and part of me feels that the Lews Therin aspect of him is the reason for that. I feel redemption down the road that Jordan feels he needs to take Rand down a few pegs first by making him behave like an ass, but who knows. Perrin continues to brood about his involvement in the proceedings and second-guess himself at every opportunity, leaving himself open to his wife Faile’s  fish-wifery and inexplicable nastyness. The Aiel seemed mixed up to me in this book. They continue to splinter into factions, one of which begins to interact, stupidly with Forsaken...though they don’t know it. Egwene takes a HUGE leap forward in this book becoming FAR less annoying, taking far more control and really feeling like the Amyrlin Seat she should be, and that was nice to see. Elayne and Aviendha have a few choice moments as well, growing as characters, less so Aviendha though. In the white tower Elaida completely baffles me with stupidity. She has to be one of the dumbest characters in the series, with NO idea what is going on, but it let’s her be led around by the nose by the Black Ajah which makes her scenes fun for that reason. So, everyone grows and builds, but the shining stars here are Mat Cauthon and Nynaeve Al’Meara. Mat’s plotline with his attempt to avoid Queen Tylin treating him the way he has always treated his women is both hilarious and telling. It teaches Mat a kind of lesson, but he pulls through it all in true Mat style and comes out on the other end with a crooked smile and a laugh.
Nynaeve......Nynaeve, Nynaeve, Nynaeve....oh you are my shining star. This book really is made by her plotline. She changes SO much in this book and goes from a character who I found annoying in the first few books, to one that I think has the potential to join Moiraine and Mat as a complete utter favourite of the series, hands down. Her journey takes her through accepting that she sometimes has to realize her mistakes, apologize and even accept help from men like Mat and Lan. It’s still begrudging, but there’s a twinkle there of her finally coming to terms with the part of growing up that means leaving Emonds Field behind and with it the ways she used to behave. Two things contribute to this transformation. The first is her scene depicted on the above eBook cover when she nearly drowns and isn’t mad enough to use saidar, so she resigns herself to the fact that she is going to die...and all of the sudden her block is gone and she can use the one power whenever she likes! That coupled with her rescue by Lan and her decision to not let him go this time and has the Sea folk marry them that night, make for a real 180 and she not only becomes tolerable, but cool in the process!

So, all in all I can only assume this book gets a bad rap as a few of these middle volumes have because folk had to wait for them. It seems to be the running theory that the fact I enjoyed this one as much as I did was because I didn’t have to wait years for it. Sufficed to say it was a blast and I enjoyed almost the entire thing. Yes, the ending feels a little rushed, but overall I can’t really complain much.
I have THE PATH OF DAGGERS on my bedside table and will likely be getting to it sometime next week.
Posted by GunMetalBlue at 12:50 PM