OMG! its an OGN Review. Serenity - The Shepherd's Tale 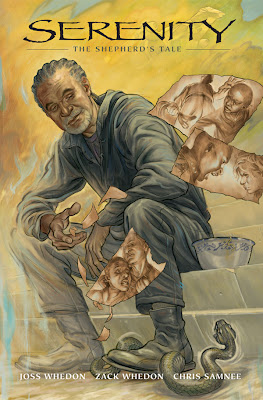 I rarely read comic book versions of licenced television properties. Frankly they never capture the feel and presence of the original material. However, having said that, I'm always willing to make an exception for the FIREFLY\SERENITY franchise. Of all the Joss Whedon vehicles that were killed off before their time its the one one thats always struck me as having the greatest potential. In the short time the series was around it served as the platform for epic adventure storytelling and intense character examinations. Plus, cowboys in outer space, what's not to love?
Anyway, this one-off OGN tells the back story of Shepherd Book, played by Ron Glass in the series, Serenity's spiritual advisor with a mysterious past. The story's narrative structure is lifted directly out of MEMENTO. The book opens with Book's death at the Haven mining colony from feature film and ends with a young Book leaving home and making his way into the world.
Written by Joss Whedon and his brother Zack, with art by Chris Samnee, THE SHEPHERD'S TALE peers into Book's world during key moments of his life, from how he ended up becoming a lay-preacher on Serenity, to the role he played in the Unification War and his life growing up as a young street thief. In the story's afterword Zack Whedon describes how Book is a man who is always running. As a young man he runs from his past and when he gets older he chases after the tranquility and peace of mind he was denied in his youth.
SHEPHERDS TALE is sweet and to the point. Based on a character outline written by Joss it can't help but feel like a lost episode from the television show. And perhaps that is this story's greatest strength. It's not simply milking fans of the franchise for a couple extra bucks (although with a cover price of $14.99 I can't deny that my wallet tried to shake some sense into me at the cash register). Rather, THE SHEPHERD'S TALE is a story that was always meant to be told in the series proper. And now, as a comic book, some of the finishing details of the 'verse are finally coming to light.
If it wasn't for the steep cover price I'd be much more willing to give this comic an unequivocal 'buy.' As it is, my praise is still fairly effusive. Whedon the Zack does an admirable job recreating the tone and patter of FIREFLY's trademark dialog. He keeps the story moving along at a fair clip, never letting it get bogged down. If anything, I would have loved to have seen him spend more time in some of the scenes, fleshing out the characters a little more.
Chris Samnee does a great job on the art, creating rugged and energetic scenes. He doesn't strive to recreate the visual look of the characters in exacting detail, but he does create a images that feel an awful lot like Serenity universe, raw and unfinished. His style suits the tone and look of this title.
Book is an interesting choice for a character introspective. On Serenity he was one of the characters that worked best in a supporting role. He was calm and stable, not flashy and outspoken, nor prone to seek out the spotlight like some of his shipmates. This comic shines a flashlight on a somewhat two dimension character and instead reveals a man of great conflict and depth. If you're a fan of Serenity, or just like good genre writing, I highly recommend you pick up this title.
Posted by Chris at 7:31 PM