In the Days After: Towers Of Midnight, 13th volume in Robert Jordan's Wheel Of Time series released 2 days ago 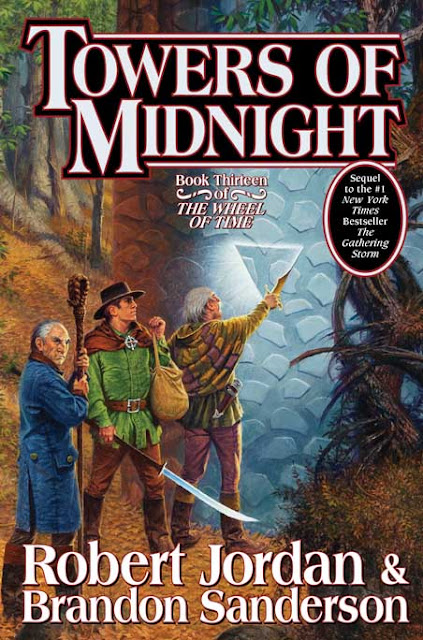 Unless you have been living under a fairly large sized rock, in the past few days you know that this book has hit bookstores.
Droves of fantasy fans have either checked for their pre-order in their mailbox, or have ventured out into the lovely fall weather to go to their local bookstore to pick up Jordan/Sanderson's new book.
The penultimate story in (what will be) a fourteen book Epic High Fantasy series, marks the first time in many years that WOT fans have had the glorious pleasure of having the newest volume come out a mere year after the previous (2009's THE GATHERING STORM) one did. Before Robert Jordan passed away, the time between release dates stretched to years and fans had to accept that they would have to wait. Well no longer, as new fantasy IT boy Brandon Sanderson (the man chosen to finish the series after Jordan's passing) has been consistent and is banging the books out as fast as he can.
I am personally only at book eight (THE CROWN OF SWORDS), so I can't yet comment on the two Sanderson penned volumes, but sufficed to say, word of mouth has it that the series is in the best hands to finish this immense tale.
At any rate, if you haven't yet done so (and you have read the first 12 books) then get out there and score yourself a brand spankety new hardcover of TOWERS OF MIDNIGHT, grab a cup of joe and settle in by the fire.
Note: Chris has the book and will be at work on it soon. The review should be up as soon as he finishes. He promised. ;)
Posted by GunMetalBlue at 10:59 AM