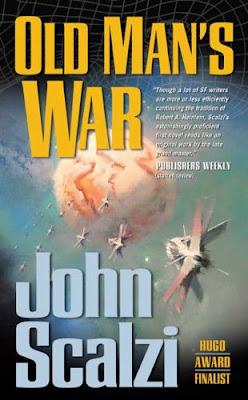 John Perry did two things on his seventy-fifth birthday. First he visited his wife’s grave. Then he joined the army. The good news for humanity is that there we have finally made it into interstellar space. The bad new is that there are few planets out there fit to live on - and plenty of alien races willing to compete for them. Therefore we must fight: to defend Earth itself, and to stake or claim to planetary living space. Far from Earth this conflict has been going on for decades, brutal, bloody and unyielding.

Earth itself is now a backwater, with the bulk of humanity’s resources in the hands of Colonial Defense Forces. But you cannot join the CDF until you reach retirement age because they don’t want young people; only those with the knowledge and skills amassed during decades of living. Once you join CDF, you’ll be take off Earth and never allowed to return. First come two years at the front and, if you survive, you’ll be given a generous homestead stake of your own on one of those hard-won colony planets.

When John Perry agrees to this deal, he has only the vaguest idea of what to expect. Because, light years from home, the actual fight he faces is far harder than he could imagine...and what he himself will become is far stranger still.
John Scalzi was a name I heard batted around the message boards and blogs I frequent as a new name in sci-fi, but one that people really seemed to get behind. His debut novel OLD MAN’S WAR introduces us to a humanity that takes old people, for their life experience (not to mention their fear of death) and recruits them into the Colonial Defense Forces (or CDF) to fight for humankinds planetary colonies.
A fairly simple premise, but one that helps to bring some very key questions about the nature of us as a society into the fray. Aliens are willing to fight tooth and nail it would seem for the same bits of rock and space, and regular humanity just ain’t up to the task. Enter the CDF and their process of transferring the human consciousness from the old bodies into new (green) super-enhanced ones that are harder to kill or maim. Thus making a military of super-humans who have bounds of life knowledge, but the looks, strength, stamina and agility of a super-commando.
Colour me interested.
The main character of the tale is John Perry. A writer who buried his wife days earlier and joins up with the CDF as his life no longer has any real ties on earth. In his new body aboard the CDF ship that orbits the planet Phoenix (the CDF’s main outpost) he meets a number of other post-old timers who he befriends in the training process. After many tests and trials of the basic training process, each is assigned to different ships and platoons. Perry himself impresses the lead commander so much that he is put in charge of the platoon.
I don’t want to spoil too much plot. Sufficed to say Scalzi adds into the mix cool tech (brain incorporated smart computers that a soldier can use and talk to called BrainPal’s, which Perry nicknames Asshole), interesting Aliens (Smart and religious Consu, and the one inch high Whadians are equally fun to read about!), and some decent physics infodumps (FTL travel is by Skip Drive creating modified universes) that never FEEL like infodumps. The characters, being old folk, always manage to analyze everything that happens with wizened eyes, and this makes for very well thought out discussions and dilemmas that never feel overwrought or tacked on.
This is an easy read, but one that never failed to thrill me. It takes about 30 or 40 pages to really get going, but when it does the pace rockets away and drags you along with it. I raced to the ending and was so impressed I went out and bought the sequel. I’ve heard that Scalzi is compared to Heinlein by folk who have read both authors, but I haven’t so I can’t make any comparisons. That said, when it comes to sci-fi I am very, VERY picky and I know what I like, and I loved OLD MAN’S WAR.            A riotous blend of sci-fi and adventure with a rip-roaring story that will transport you to the other side of the stars with your humanity intact.
Posted by GunMetalBlue at 8:44 AM