Upcoming: Who is Deborah Harkness?! 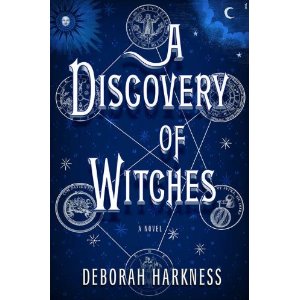 When historian Diana Bishop opens a bewitched alchemical manuscript in Oxford’s Bodleian Library it represents an unwelcome intrusion of magic into her carefully ordinary life. Though descended from a long line of witches, she is determined to remain untouched by her family’s legacy. She banishes the manuscript to the stacks, but Diana finds it impossible to hold the world of magic at bay any longer.
For witches are not the only otherworldly creatures living alongside humans. There are also creative, destructive daemons and long-lived vampires who become interested in the witch’s discovery. They believe that the manuscript contains important clues about the past and the future, and want to know how Diana Bishop has been able to get her hands on the elusive volume.

Chief among the creatures who gather around Diana is vampire Matthew Clairmont, a geneticist with a passion for Darwin. Together, Diana and Matthew embark on a journey to understand the manuscript’s secrets. But the relationship that develops between the ages-old vampire and the spellbound witch threatens to unravel the fragile peace that has long existed between creatures and humans—and will certainly transform Diana’s world as well.

Deborah Harkness made her debut in-person on the panel at the New York Comic-Con that Del-Ray set up to discuss fantasy novels. She sat among GIANTS of the current fantasy stage, Jim Butcher, Joe Abercrombie and Brandon Sanderson to name but a few.

You were probably wondering, like me, "Who the heck is that woman? What is she doing on a panel with my favourite authors? Should I know who she is?"

Well, wonder no longer. I have some info about her first book titled A DISCOVERY OF WITCHES, and the website that goes along with it. It appears that Del-Ray wanted to debut this new author to the genre by shrewdly dropping her into a panel with tried and true crowd/fan pleasers. Placing her into that standing-room only, packed to the rafters hall at NYCC has as good as guaranteed a concentrated audience who will, at the very least, go home and look her up. Let alone the fact that video from the panel has been posted online and has been making the rounds of fantasy blogs and message boards, including this one, causing likely the same desire to look her up.

What a recipe! If her book is as good as all that, then this will go a long way to market her debut and give it the teeth it will need to bust into the fantasy genre as a winner. As we fantasy/sci-fi fans are a fickle lot, it might be tough so let's hope she's up to the challenge. the book sounds promising and I am always willing to try out new authors.

Who knows, maybe she'll be the "IT" fantasy author of 2011, like Abercrombie, Rothfuss and Lynch were before her. My only issue may be the story once again of someone falling for a vampire....but at least this time it is a witch. I'll hold judgment on that front until I read it.

I kind of want to give a slow clap to Del-Ray on this one. Though entirely transparent as such, it was still a pretty savvy marketing move.
Posted by GunMetalBlue at 2:48 PM

Email ThisBlogThis!Share to TwitterShare to FacebookShare to Pinterest
Labels: A Discovery of Witches, Deborah Harkness, Upcoming