Hey everyone, these are 24 hours late because we suffered a power failure last night (which feels like the modern equivalent to 'the dog ate my homework'). 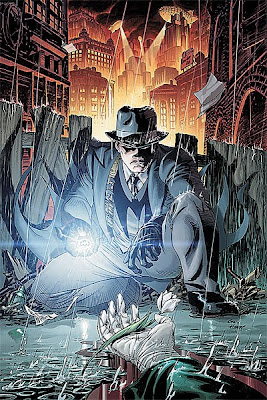 Batman: The Return of Bruce Wayne #5

The current chapter of Grant Morrison’s Batman epic is drawing to a close. And even the most casual fan of either the writer, or the character he’s playing with, has to respect the lengths to which Morrison has gone to mine the lesser known aspects of the franchise and reconcile some of its more fantastic elements. Suddenly, everything is on the table, because it all happened. Every cockamamie Silver Age story that was wiped away by CRISIS OF INFINITE EARTHS with an embarrassing shrug actually took place. It’s like the Batman franchise has been rebooted on the sly and decades worth of stories are now relevant again, or at least deserve a chance to be re-examined in the wake of Morrison's stint.

I’m not sure why the Hellblazer franchise decided to spin this story out into a miniseries, because right now there’s nothing taking place in these pages that can’t be handled in the main title. Is Vertigo sitting on a backlog of ‘blazer stories and wanting to see some return on their investment? Anyway, I would have passed on this if it wasn’t being pencilled by the fantastic Sean Murphy. You might remember him from his work on JOE THE BARBARIAN and Learning with Wolverine. There’s nothing here that you don’t see in a straight of ‘blazer story. John Constantine drinks, smokes, acts like a dick and is apparently still British. All good in my books, but I’m still curious to see what makes this story so special.

Combining Paul Cornell, the current writer of ACTION COMICS, with Knight and Squire, one of Grant Morrison’s great reinventions seems like a recipe for printing money. In reality it’s neither good nor bad, but just kind of...there. The writing is solid, the art passable but not spectacular and its full of British-y goodness. Surprisingly, it does nothing for me. The story deals with heroes and villains that gather to socialize once a month at a local pub, prevented from fighting each due to the influence of ‘truce magic.’ As you might expect, the truce is broken and chaos ensues. I’m willing to stick with the story for another issue, but this title will really have to up its game if it expects to keep me as a reader.

One of things that impresses me about Geoff Johns is the man’s ability to stick with a title. In today’s comic book market, some writers can’t stay with a book longer than an arc or too. Yet Johns frequently manages to write on a title for years, a rarity in any age and practically unheard of today. With Doug Mahnke rocking the pencils and Johns continuing to pen the story he’s been working on for the last five years this title is consistently at the top of my pull list. This month we’re treated to the continuing adventures of the Rainbow Raiders. Johns is doing an admirable job portraying the disparate personalities that banded together after the events of THE BLACKEST NIGHT in a realistic and believe manner. (Well, as realistic as a group of aliens with multicoloured magic wishing rings can ever hope to be)

Peter J. Tomasi might not be gracing the pages of the GREEN LANTERN CORPS anymore, but he’s not too far from the GL franchise thanks to his work on EMERALD WARRIORS. I get the impression that Johns uses the main GL title to tie the franchise into the DCU and move events forward. This leaves GLC and now EW to pick up some of the dangling plot threads and flesh out the larger world of the Corps. Its a system that works really well for all the titles involved. And Fernando Pasarin is just killing it on pencils. I’m not used to seeing art this great on a book that I consider to be part of the expanded DCU and not a core title.

I’m conflicted. On the one hand I respect what J. Michael Straczynski is attempting to do with the Superman franchise. He’s trying to approach the character in a fashion that he believes has never been done before. And I respect that. On the other hand, I’m not sure he’s been entirely successful in his aims. Let’s face it, when you have a publishing history as long as Superman does there aren’t very many unexplored angles. While readers may never have seen it in such an elongated form, the concept of a reflective Superman has been done before, many times over. Done properly in the course of a single issue it can be a powerful tool. Spread it across an entire story arc and it can border on tedious. This month, Superman continues in his mission to walk across America. He gets in a fight, wins it and everything looks pretty much the same as it has in his world for the last 70 years. I’m not willing to write JMS off yet. But at this point I’m look forward to his SUPERMAN: EARTH ONE book more so than I am his work on the main title.

Say what you will about Mark Millar, and the man certainly has his fair share of detractors, but the man knows how to make the most of what he has. If he’s not promoting himself, or his work, he’s name dropping his Hollywood connections or stepping outside his traditional box to try new things, like directing a film for pete’s sake. The man is a shameless huckster and the comic world is better for it. Whether you like or dislike his writing most people seem to have an opinion about it. Which means you’re probably reading what he puts out and that’s the point of the whole thing. Anyway, SUPERMA…I mean SUPREM…er…SUPERIOR #1 is a straight up origin tale with Superman like overtones. Most origin tales are limited by what they can do as they’re too busy checking off the obligatory narrative plot points. With any luck the second issue will allow Millar to start monkeying around with conventions of the genre.