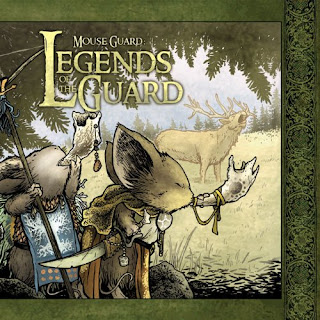 Inside the June Alley Inn, located in the western mouse city of Barkstone, mice gather to tell tales, each trying to outdo the other. A competition, of sorts, begins. The rules: Every story must contain one truth, one lie and have never been told in that tavern before. With the winner getting his bar tab cleared, fantastic stories are spun throughout the evening. Legends of the Guard is a new Mouse Guard anthology series featuring the work of artists and storytellers handpicked by series creator David Petersen, including Jeremy Bastian (Cursed Pirate Girl), Alex Sheikman (Robotika), Ted Naifeh (Courtney Crumrin and the Night Things), Gene Ha (Top 10), Sean Rubin (Redwall), Guy Davis (B.P.R.D.), Katie Cook (Fraggle Rock), Karl Kerschl (Teen Titans: Year One), Craig Rousseau (Impulse), and Mark Smylie (Artesia).

I am a flag waving, card carrying supporter of David Petersen's Mouseguard series. I love the art, the story, and basically everything else that goes along with it. I have hardcover versions of both Mouseguard: Fall 1152, and Mouseguard: Winter 1152, and I don't plan for this next volume to slip me by either. Currenbtly Petersen is writing Mouseguard: The Black Axe, which is a six issue series which began in Sept. Of this year, and on the horizon is also Winter War of 1149.

Very exciting. I realize it is close to a year away from release, but I only just learned of it, so I deemed it the type of post we all need on a crappy Monday morning.

Posted by GunMetalBlue at 4:19 AM