Doctor Who: The Asylum Of The Daleks (review) 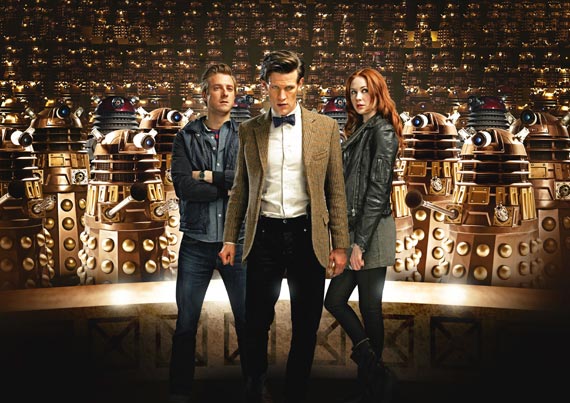 Saturday’s episode of DOCTOR WHO, the Series 7 premiere titled THE ASYLUM OF THE DALEKS, could have been called Return To Form. After a rocky, not all together loved Series 6, Steven Moffat’s DOCTOR WHO had some work to do to bring all the fans back into the fold.

Well, what a difference an hour makes.

THE ASYLUM OF THE DALEKS (written by Moffat) is one of his very best penned episodes in his tenure as showrunner (if not THE best), and pulled off one of the Series biggest spectacle episodes, and they were even able to keep a HUGE surprise under wraps (Note: I will be talking of that surprise in the next paragraph so if you’ve not yet watched, don’t read further).

After the 5 web minisode’s called POND LIFE which basically accounted for the goings on with both The Doctor and The Ponds during the interim since May, it appeared that the Ponds were on the rocks (though no one knew why) marriage-wise, and the Doctor had been on a fair few adventures in their absence. So as we start ASYLUM, they aren’t even living together. The Doctor receives a summons to the ruins of the planet Skaro (the Dalek homeworld, and one that had long ago been ravaged by biological and nuclear weapon war; See: Classic Who arc THE GENESIS OF THE DALEKS) and learns that a woman’s daughter is supposedly taken captive on the Asylum world of the Daleks (basically where they put all the crazy-ass Daleks), and of course the Doctor sees through the ruse with the woman’s lie, but not before he is captured. The Ponds are summarily captured as well, and the 3 end up on Skaro and in the center of the Dalek Parliament. But instead of killing them, the Daleks, led by the non-pepper-potted prime minister, tell them that they will allow them to live if they will go to the surface of their asylum world, where a ship has crashed causing a rift that could allow the escape of thousands of Mad Daleks, a risk the Skaro Daleks refuse to let happen. They wish to nuke the planet, but the forcefield defending it is active and must be deactivated on the surface first, and they won’t go down there. Thus, enter trapping the Doctor and having him go down and do it. 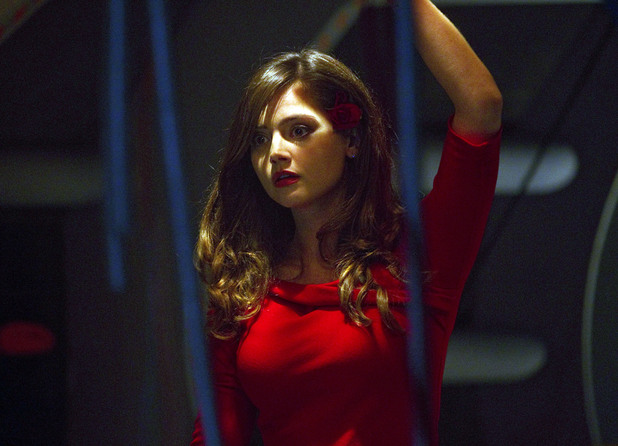 The first big surprise was the appearance of new companion Jenna Louise-Coleman (whose debut was said to not be coming until Christmas); named Oswin Oswald she’s a plucky, fast-talking, flirty genius. Moffat and Co. ought to be applauded for their ability in a very spoilerific show to have been able to keep Oswin’s debut a total secret. I was impressed as when she showed up I was grinning from ear to ear and stunned. It was a lovely introduction and she reminded me of a cross between Rose and Donna, so that makes me very happy. Coleman took to her dialogue like a fish to water. Her few back and forth convo’s with the Doctor proved easily why she was chosen as his new companion. She’s got the chops and she’s really unique.

The rest of the show unfolded exactly as had been foretold, and was every bit a standalone blockbuster hour of Television. It had great action, wonderful sets and writing, the music was amazing and it really felt a lot longer than it was. It felt like a treat, as if we were getting something extra long. Moffat should also be applauded for toning down his script trickery and clever bits as instead of trying to riddle the script with them he had about two or three and allowed the rest of the tale to stand out more. Something I always felt was missing from his scripts was the heart of the narrative, as he always seemed to get mired in being clever for clever’s sake…and in ASYLUM he really shows that he was listening to us when we commented on that in Series 6, and paid a lot of attention to story and much less to cleverness. I wanted to clap with the simplicity of the tale this time. We are a far cry from the kitchen sink that was A GOOD MAN GOES TO WAR, and I came away very happy with that result. 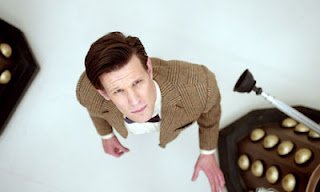 The movie-format has a few giggle-worthy moments, like Rory doing a slo-mo hail may slide underneath a doorway like a Michael Bay flick…but you know what? Even that didn’t bother me and made me smile. Sure it’s over the top, but when has DOCTOR WHO ever shied away from being over the top? Nah, this is DW the way we want to see it. This is the reason we tune in. We want to see stuff like this, we lap it up!

I don’t want to go to far into the rest of the narrative as you really should see it, and the rest of the script speaks for itself. I wil say that though I am not an Amy / Rory fan, their “on the rocks” stuff in here felt much more real than any of their previous “love” elements did in the Series, so when the dénouement of the “why” of their upset comes to the fore and then the resolution to that plotline, I really FELT it this time, and that’s not something the Ponds often have done for me.

Again, this is easily one of Moffat’s BEST scripts to date since he took over the show reigns. ASYLUM has everything in it that one expects when watching DW, and it manages to open the season with a HUGE bang as well. I loved every last moment. 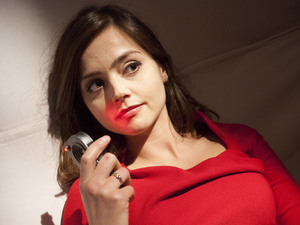 Now, we are left to speculate how exactly Oswin will show back up, whether her Dalek-self will have somehow escaped the Asylum world before it was blown up, or the Daleks saved her somehow, or the Doctor will meet her earlier in her timeline…we have to wait to find out, but I really love that we got to see her so early on! It felt like Donna’s first ep finishing on that shot of Rose…it totally set up the Season for me, and this feels similar. We know the Ponds are on the way out and this was the perfect way to give us our quick intro to what’s/who’s coming down the pipe this Christmas.

SIDENOTE: In his Hugo Acceptance speech for Best Short Form Presentation (THE DOCTOR’S WIFE), Neil Gaiman announced he was on the 3rd draft of another episode of DOCTOR WHO! I cannot wait for that, as his Series 6 ep is easily my fave.
Posted by GunMetalBlue at 10:21 AM