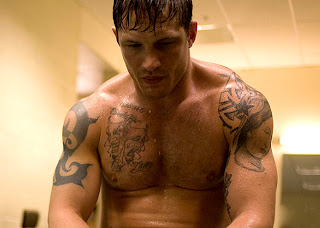 MMA does nothing for me, but I suppose its become the go-to sporting genre for Hollywood when they need to see two men dealing out punishment to each other in an officially sanctioned environment.

But damn if WARRIOR isn't a good film.

The movie does suffer from a mild case of the 'little bits'.

The climactic setup is a little bit too precious.

The emotional familial-angst is a little bit too extreme.

And the chess board has been laid out a little bit too perfectly, each story development or emotional character beat showing up at exactly the right time to help carry the story forward.

But if dabbling lightly in extremes is the worst any movie has to offer then you really can't complain. Strangely enough the film's pacing actually slows down when the simmering MMA tournament that's been bubbling in the background lurches onto center stage.

Also. Tom Hardy? I'm officially a believer now and I think his inclusion in THE DARK KNIGHT RISES can only build on the high standard of Bats-baddies by Ledger
Posted by Chris at 8:07 AM