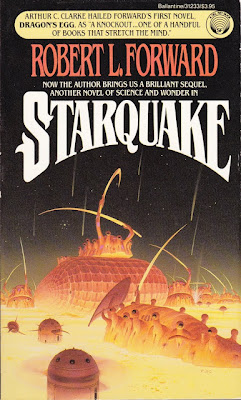 The lifespan of the alien cheela can be measured in the time it takes a human being to blink. To the naked eye the cheela are amorphous blobs barely the size of a sesame seed, but they pack the same mass as a human being does and they live on the surface of Dragon’s Egg, a neutron star with a gravity hundreds of times more powerful than Earth’s.

Astronauts orbiting around Egg have watched the cheela civilization develop from a nation of feudal warring tribes to a mature space faring culture in less than 24 hours. But as the humans prepare to pull up stakes and head back to Earth a starquake rips across the face of Dragon’s Egg, killing almost all the cheela, sending the entire planet back into the stone age and stranding a small group of cheela on an orbiting space station with no way of returning home.

As the cheela on Egg begin to recover from the ‘quake the remnants of their once great culture quickly descend into barbarism and savagery. Now the human astronauts must figure out a way to reunite the spacebound cheela with their planetary cousins and rescue the alien culture from self-destruction before it’s too late.

STARQUAKE is the sequel to one of my favourite childhood books, DRAGON’S EGG. Given the little synopsis I just gave you would be forgiven for thinking it’s a straight science fiction book.

STARQUAKE is a science textbook about the make-up and properties of neutron stars where a valiant, but ultimately flawed, attempt was made to surgically graft a narrative plot line onto its academic bonafides. The Frankensteinesque result is a strange amalgamation of two very different genre into a final product that serves that needs of neither parent but somehow manages to be an interesting and pleasant read nonetheless.

The Characters and the Plot are paper thin, both elements clearly exist only as a Science Delivery Mechanism to ensure the reader gets their maximum recommended daily dose of book learnings in the sweetest manner possible. It can take a Herculean effort at times not to skip over the hard science info dumps and jump to the next dialogue exchange or story development.

There’s a kind of wholesome folksy blandness to all the characters. Despite humans and cheela living on vastly different time scales and having wildly dissimilar physiological, cultural and mental makeups most of the characters come across as overly friendly Mr. Rogers types, always willing to lend a neighbour a hand.

Even the one or two characters who manage to stand outside these broad archetypes don’t do so for very long or very well. At first glance distinctive cheela characters like Attila and Qui-Qui might show glimpses of a unique personality, but sadly glimpses are all we get. In STARQUAKE even sadistic despots and sultry cabaret singers come across as homely and personable when you spend enough time with them.

Before Forward started writing sci-fi he made his bank as a physicist. And, like any good scientist would, he tackles the job of writing in the most rational and clinical manner possible. STARQUAKE is a technically perfect excercise in how to structure a novel, a series of increasingly difficult obstacles that must be overcome in order for the story’s narrative to progress.

Unfortunately while the book might excel in its technical elements it is woefully lacking in its artistic implementation. STARQUAKE has no soul or personality. It’s a dry recitation of events that are presented to potential readers in the most straightforward manner possible. Don’t get me wrong, the book is never boring. It’s just that Forward lacks the writerly hutzpah to compel the reader’s complete attention and paper over the book’s deficiencies with a distinct authorial voice.

I’m glad to finally be getting around to closing out a story that brought me so much joy when I was younger. I have a real fondness for the cheela and the story of their life on Dragon’s Egg. But I doubt I’ll be rereading this book again anytime soon, if ever. If anything, it’s a cautionary tale that sometimes the things we loved so much in our childhood don’t always age well as we get older.
Posted by Chris at 1:23 PM