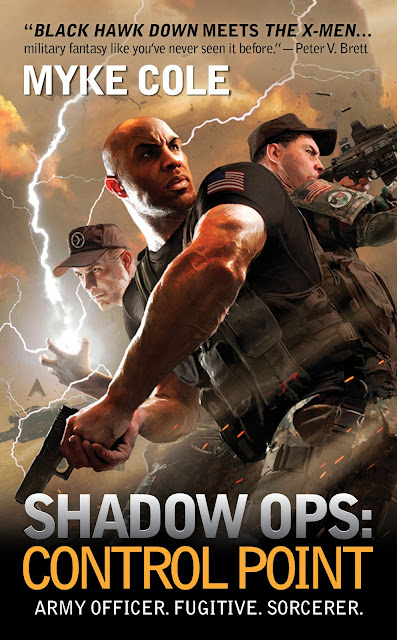 All over the world people are 'coming up latent' - developing new and terrifying abilities. Untrained and pan-icked, they are summoning storms, raising the dead, and setting every-thing they touch ablaze. US Army Lieutenant Oscar Britton has always done his duty, even when it means working alongside the feared Supernatural Operations Corps, hunting down and taking out those with newfound magical talents. But when he manifests a rare, startling power of his own and finds himself a marked man, all bets are off. On the run from his former colleagues, Britton is driven into an underground shadow world, where he is about to learn that magic has changed all the rules he's ever known ...and that his life isn't the only thing he's fighting for.

Have you ever sat down and thought, what would really happen if the world all of the sudden had magic? How would the people in the world deal with the revelation that magic started to exist across the world? More importantly, how would the world's various government’s deal with it?

In a book that echoes similar ideas brought forth with the U.S. Government and Mutant’s in the X-Men comics, Myke Cole’s debut novel SHADOW OPS: CONTROL POINT shows us exactly what would happen. The Government’s of the world would immediately tamp down, organize, and regulate the heck out of magic. Perhaps that stems from fear of what the average citizen can do with godlike powers, or perhaps it comes from the need to keep things organized, fair and safe in the country. The problem with that is that these sorts of things begin with the best of intentions and end up skewing into unfair and even inhuman territory.

In Cole’s work, the military arm that deals with magic (and uses it) has been factioned off into a something called the SOC which handles sanctioned magic elements (Fire, Wind, Water, and Earth). They hunt down Selfer’s (magic users who use their magic unregistered and can cause havoc) and Probes (Users of the prohibited magic schools, things like Portamancy, Necromancy, Negramancy ect.) because they are deemed a danger to themselves and society.

Protagonist Oscar Britton begins the book leading a Helicopter team that is assisting in the takedown of two high school students who have manifested and are wrecking the building and threatening those around them. The Aeromancer who is leading the op ends up soullessly murdering one of the two kids because she manifests a Probe school of magic and Oscar is horrified by the event. Then, of course, all hell breaks loose because just after that Oscar manifests himself, and it’s in a prohibited school  …and having seen what the SOC does to Probes, he runs.

The novel rockets off after this moment and never stops, with Oscar on the run, then finding himself in the alternate dimension where magic seemingly originates from called The Source. A place populated by other worldly beatsies, like demon horses, goblin tribes and huge Roc’s. Oscar’s life turns completely upside down in the second half of the book, but I'd rather not spoil further plot points so I won't tell you why.

Cole has a distinct and deft hand in the pacing department. Not once in SHADOW OPS: CONTROL POINT did I feel that anything was tacked on for the sake of it. The prose is clean, and fluid skipping along for almost all the 400+ pages. It's not particularly descriptive and could be described as workmanlike, but that's not a bad thing. The story itself is entirely compelling and quite clever. Having been in the military (tours in Iraq I believe) himself and having worked as a civilian contractor Cole has a high level of knowledge of how things work within that organization. All the terms and many of the phrases used in the U.S. Military are represented, but it doesn’t overwhelm you which was nice. There is (if you require it) a glossary of those terms in the back of the book in case you feel flooded at all by them, but I wasn’t so I would be too worried.

I truly think that where Cole absolutely shines is in his characterization. Every last character in this book has a lot of depth, much more than you’d expect from a novel of this length. He spends a lot of time not only putting Oscar through his mental paces, but each of the side characters as well. Characters are put through a very realistic wringer that asks them what side they are on, if it’s the right side, then asks them again, and shows them it might not be. It was a quiet back and forth that goes on while the rest of the book is unfolding that I quite enjoyed. A very unique way of character building, and I gotta give Myke credit for that. Certain characters will pop out and immediately attach themselves to you by being endearing and brave. The novel brings up notions about racism between humans and the Source’s indigenous population (showcased in some folks treatment of goblins), and how even though humans are the invaders, they still feel superior.

The world building is fair and decent, as I walked away from the book with a good knowledge of what Cole set out to establish with the Source. I feel like we’ve only just scratched the surface of what there is to see in the world though. There is certainly a lot of room for exposition about the magic, where it comes from and how it manifests. About how the source ties into our own world as well. Is it an alternate dimension, reality, time? I’m very curious and I’ll be very interested to see how that plays out in the other two books.

The first of as trilogy, Myke Cole’s SHADOW OPS: CONTROL POINT is one of the better debuts so far in 2012. It’s fast, clever and endlessly entertaining. You will find yourself cheering for Britton and his friends as they race to save themselves and the planet. I really enjoyed this book a great deal and I feel that Cole has a distinct voice, and a wild imagination. I look forward to the rest of the trilogy with great interest!
Posted by GunMetalBlue at 7:13 AM