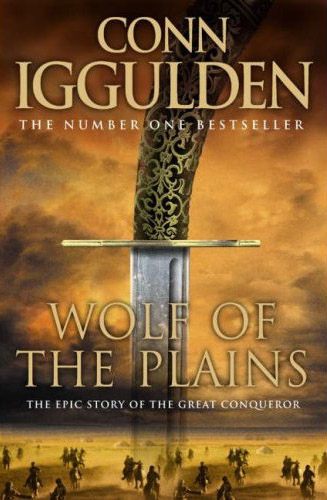 He was born Temujin, the son of a khan, raised in a clan of hunters migrating across the rugged steppe. Temujin’s young life was shaped by a series of brutal acts: the betrayal of his father by a neighboring tribe and the abandonment of his entire family, cruelly left to die on the harsh plain. But Temujin endured—and from that moment on, he was driven by a singular fury: to survive in the face of death, to kill before being killed, and to conquer enemies who could come without warning from beyond the horizon.

Through a series of courageous raids against the Tartars, Temujin’s legend grew. And so did the challenges he faced—from the machinations of a Chinese ambassador to the brutal abduction of his young wife, Borte. Blessed with ferocious courage, it was the young warrior’s ability to learn, to imagine, and to judge the hearts of others that propelled him to greater and greater power. Until Temujin was chasing a vision: to unite many tribes into one, to make the earth tremble under the hoofbeats of a thousand warhorses, to subject unknown nations and even empires to his will.

I actually read the majority of this, the first book in Conn Iggulden’s Conqueror Series, a few months back. Some other books dropped and I had to put it down for a time, but this past weekend I went on a spree and did a bunch of reading, and foremost on the list was finishing up WOLF OF THE PLAINS.

You all may know him as Ghenghis Khan, but when he began life his name was Temujin and he was second son of the leader of a nomadic tribe of Mongolian’s called The Wolves. Raised as the son of a Khan, he learned the sword and the bow from a young age. He is even taken into another tribe called the Olkuhn’ut, a place he will choose a future bride from. Just when things seem to be going well when his father Yesugei is attacked by Tartar’s and wounded, the injuries of which eventually kill him and then all hell breaks loose. Eeluk, one of his father’s sworn men (bondsmen), usurps the tribal leadership of the “Wolves” and banishes Temujin, his mother and his brothers and sister to the plains where they endure hardship, starvation and betrayal that almost kills them.

A few years later, when Temujin is about eighteen he and his remaining brothers Kachuin, Khasar, and young Temuge, as well as his sister Temulun and mother Hoelun are living decently on the Steppes when Eeluk’s Wolves come to visit, where they capture Temujin and bring him back to the Wolf camp to be kept captive and tortured as Eeluk seeks to solidify his reign by showing his mastery over the son of Yesugei.

I don’t want to spoil too much of the plot, so I will leave it at that, but know that after he is captured the narrative flies off at a rocket pace. It shows us how a captured young man, beaten, bloodied, and left for dead by one tribe amongst many warring tribes on the plains, came back from that and became one of the most famous men in history.

If you have not seen the film MONGOL by Russian director Sergei Bodrov, it is a stunning film about the man and very interesting. What always gets me, however, was a few sentences in the trailer and as I read this book I could not help hearing them in my head: (Note: This is to be read in the Trailer-Guy’s voice)

“When he was a boy, everything he loved was taken from him.”
“When he became a man, he would fulfill his destiny.”
“He would raise an army, and he would take it…all back.”
“One day, he would rule the largest empire the world has ever known.”

It’s funny, but as I have stated in previous review I LOVE books about glory, and I especially loves books about Glory won at odds with the situation by the underdog. Well there is no bigger underdog story than that of a young boy who is made into a slave and not only comes back against his tormentors, but unites many tribes and builds an empire that would stretch from the Black Sea to the Pacific Ocean. I’m sorry, but that is impressive! That’s an empire that would have rivaled Rome.

At any rate, Conn Iggulden is a master among contemporaries like Bernard Cornwell, and Robyn Young. Historical fiction comes to him as easily as walking. Years ago I read his first series that was about Julius Caesar, and enjoyed it wholeheartedly. I hasn’t moved on to this new series until recently, and while I feel remiss for not having gotten into it until now, I am also excited to have so many books ahead of me to read! Iggulden’s prose is easy and flows like water off the page. I never find myself thinking there is too much exposition, or not enough action. The author has a deft hand with action set-pieces and makes them sweeping and epic, while still feeling quite visceral and close-quartered.

The story itself is absolutely fascinating. I knew next to nothing about Ghenghis Khan when I began this series, and now having this little bit of his childhood, his rise to adulthood, and the very beginnings of the empire he would rule I am totally enthralled. Iggulden brings a level of excitement to the tale and the pacing at points borders on ridiculous. While I found the initial 50 or 60 pages or so to be a bit heavy on set-up, once things properly get going and once Temujin begins his story properly I found it incredibly hard to put down.

A really amazing roller-coaster of action and suspense bundled into a story from history that not a lot of people know about, WOLF OF THE PLAINS is the real deal. If his Julius Caesar series was his opening salvo to the historical fiction world, then the Conqueror series is his magnum opus. A brutal, blood-soaked novel, that will ultimately keep you reading and learning about one of the greatest empires the world has ever known, and just how it came to be.

Posted by GunMetalBlue at 8:45 AM