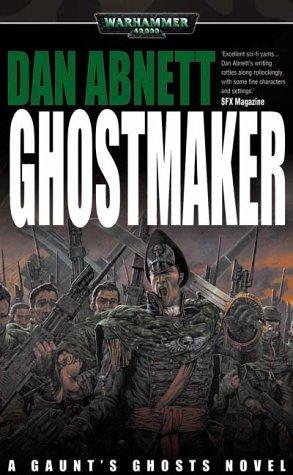 Chasing immediately on the heels of such a fantastic opener as FIRST And ONLY, the second book in the first Gaunt’s Ghost Omnibus has a tall order ahead of it. In GHOSTMAKER, Dan Abnett has decided to approach this order from a strange, and ultimately successful angle. Instead of another full, straightforward story narrative, we get numerous short fiction pieces instead. There are little chapter/short piece openers that all take place on the same jungle planet where the Ghost’s await word to attack. As Gaunt walks the lines and encounters each of his men, he begins to recount earlier stories of each one. So we get thick, deep back stories about people like Mad Larkin, Rawne, Corbec, McKoll, Caffran, Domor and even Milo. Those stories really delve into the personalities that were only hinted at in the previous volume, and as a second book this idea pays off well. I walked away from GHOSTMAKER with a much clearer understanding of each of the Ghost’s as individuals.

Each of the stories are quite well thought out and cleverly executed. I was never bored and the stories don’t overlap each other, even though they are all war and battle stories. I think my favourite was probably Mad Larkin’s tale THE ANGEL OF BUCEPHALON, part of which because we discover that Mad Larkin suffers from Epilepsy (an illness that a member of my family is afflicted with), and he’s a sniper. Not only that, but he is the BEST sniper in the whole regiment. It’s a well told story that surprises you and informs you at the same time. It’s also hard not to sympathize with the way a soldier like Mad Larkin deals with and reacts to the insanities of war, when you see it through his eyes. I concentrate on his story, but all the soldiers pieces were lucid, interesting studies of the personalities that have to stand out in ensemble fiction like this. Abnett took the time to write this book and give us concentration to delineate between the various people.

The ending brings us back to the main storyline on the jungle planet as the attack is called and the Ghost’s do so in squads. It is in this section that we are introduced to a new faction in the W40K universe, one I won’t spoil here, but again Abnett has the skill involved to present a huge chunk of the universe and not only make it easy to understand but he gives you just enough to be intrigued enough to want more.

I have not yet moved on to the third part of the omnibus, NECROPOLIS, as I had a few other books to get to, but I will be coming back to it soon as I hear it is a lot of people’s favourite of the three stories. To say I am going in with excitement to that third book is kind of a no-brainer. No, what I am really pleased about is that I get to go into the third book with an insight and an understanding of the main forces of the Ghost’s themselves as individuals, and that to me is priceless.

So Abnett has made the second book in the series be an excellent magnifying glass through which to see war as microcosm, and it paid off bigtime.

Posted by GunMetalBlue at 8:34 AM