It's that time again. With me caught up to the most recent WHEEL OF TIME book, the "First Reads" category here at Iceberg Ink is once again vacant. If you don't know this is the category here where I review books in series that have been written and read by many long ago and I'm only getting to them now. So, without further adieu I give you the new "First Reads" series of THE DARK TOWER, and here we have the first book THE GUNSLINGER. Note: I will be (after I finish the book series) be reading the graphic Novel prequels as well. So let's get started. 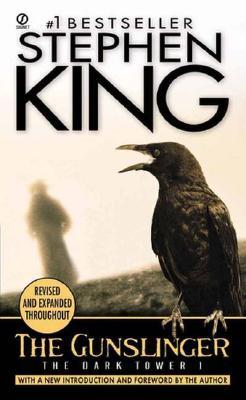 I’ll freely admit to two things here:
1)   I had tried two other times to read the first Dark Tower book. Once as a youth and it was kind of over my head, and then again as an adult when Chris told me to read it and I faltered due to dialogue early on turning me off.
2)   The thing that drew me back to try again (other than the forthcoming Ron Howard/Brian Grazer produced film trilogy possibly starring Javier Bardem in the lead) is the incredible art of the prequel Graphic Novels by Jae Lee and Richard Isanove.
So it was that I tried again. And this time I succeeded and actually really quite enjoyed the story. I read the forward/author’s note that he wrote years later about why he wrote it and the mindset he had when he did.
I should also offer up that I don’t like Stephen King’s novels. His horror/thriller ones that is. I’ve read a fair number of them and I always found I didn’t like his style on those books. I have openly made fun of Chris for his slavish, fanboy devotion to King’s pantheon of books. When we co-habitated as roommates, the bookshelves that dominated our main common living space had more than one full shelf of slightly ragged hardcover copies.
This time I realized that THE GUNSLINGER begins a different type of novel from King showcasing a slightly different style of writing and that difference is what made this book so readable. I’ll be honest, I read this one in about two sittings and had no trouble getting through it. I found the characters, especially that of main Gunslinger Roland, to be written with a decent flair and skill, especially for how young King was when he wrote it. The Man in Black comes across as a bad taste in your mouth…and he’s meant to. Jake comes across well, though I will admit to being endlessly curious how he ended up in this world from what I can only surmise is OUR world. The back story that Roland relates at intervals throughout the book about his childhood and training to be a Gunslinger is both interesting and clever. I would also say that secondary characters like trainer Cort, Alain, and Cuthbert ect. and even David the falcon are well done for the small screen time they have. On top of that I am ENDLESSLY curious about those people, not to mention who else inhabits the current world that Roland does, since this book is consumed by his quest to catch the Man in Black. I can see the potential here for a very interesting series and I look forward to continuing it. I can’t say I was bored at any point in this book. It is tightly written without any of the extraneous stuff that might slow it down. I love the whole lone gunslinger wandering samurai with pistols thing. Just solid imagery.
My complaints only come two-fold. I found that at times things got a tad too philosophical and internal, but this was not overbearing so I wasn’t too upset by it. The ending comes off a bit too existential for my tastes, BUT there are nuggets of really interesting ideas nestled within that overly verbose section and so I come away with a happy disposition.
So, as it happens, I actually enjoyed THE GUNSLINGER a lot, and fully plan to move onto the next book in the series and see where things go. This is quite unique I realize, as King has written a long fantasy series that intermingles with our world somehow and also stars a western as its setting. I’m actually impressed by that alone. Full marks to a writer I used to swear I didn’t like. Looks like I’ll have to modify that statement now.
Posted by GunMetalBlue at 7:27 AM