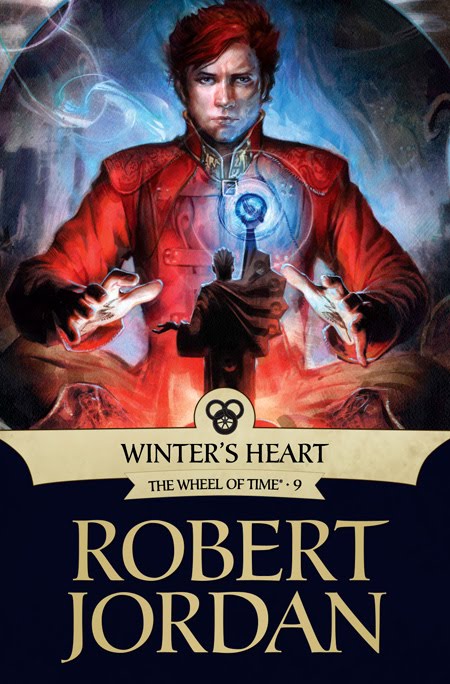 Since I began the Wheel Of Time series I’ve only had a few moments where I truly inwardly groaned, until I read the 8th book THE PATH OF DAGGERS of course. The first 3 were really quite good, the next 4 were about as awesome as the series has ever been with THE FIRES OF HEAVEN containing my most favoured moments so far, and then there is the ending of LORD OF CHAOS that kicked my butt with the battle of Dumai’s Wells. After all that my disappointment with TPOD was doubly bad because I had begun to depend on the series to keep me mega entertained.

So, what of the 9th book WINTERS HEART you ask?

Better. Now, I don’t want anyone to be under the illusion that things have gone back to super awesome of books 4-7, or even the really good of the first 3. No, they have instead gone back to some sort of status-quo. It’s as if Jordan decided that in the run up to the final books there needed to be a lull where a lot of little plot points happen, and only a few bigger things, so that when the final books came out they would knock it out of the park with bodycounts, awesome action sequences, crazy twists ect.. That’s kind of how I feel at any rate.

Many things happen in WINTERS HEART, some of which are good, some of which are ho-hum, but thankfully more of the good. One REALLY big thing happens at the end of this book that makes it worth your time. I won’t spoil it, but it is definitely a bit of a game changer so sufficed to say it is good.

Fan (and yours truly) favourite Mat Cauthon finally returns to the series after being absent through the last book…a character disappearance that I felt FAR more than Perrin’s absence in TFOH. And Mat comes back swingin’ in true from. Loved every chapter with him of course, and there is a bit of prophecy fulfillment in the fact that he finally meets the Aelfinn-prophesied Daughter Of The Nine Moons that he is going to marry (hehe) and it makes for some really great moments here.

One thing that bugged me a bit…Faile gets her own POVs after the Shaido takes her. Oh gods really? Blecch. Thankfully there is a certain missing Queen who makes up for those as she is in them and is still pretty cool in my books.

There is also, it should be noted, one moment of pure heroics in the one of the final chapters that impressed the hell out of me from Rand of all people and it really helps to make me less annoyed by his recent jerk-like I-Am-The-Dragon-Reborn-Obey-Me-OH-And-I'm-Cazy-As-A-Loon shenanigans. Probably my fave moment in the book.

The last thing (momentous moment) of which I spoke of above that happens at the end and concerns Rand and Nynaeve is well worth the price of admission.

So, all in all not bad. Rand is a little better, Mat is awesome, Nynaeve is awesome, The Seanchan are okay, Tuon, Daughter of the Nine Moons is coolio, Elayne still is kind of wishy-washy.

Oh, and Rand is trying to have 3 cakes and eat them too….I can’t see that going well later.

So, Status-Quo. Things are semi-normal, little bits of action peppered throughout a book that has a number of good things, and a few odd strikes against it. I was entertained is the best thing I can say for it. I hear the 10th book is worse, but that the 11th onwards into the Sanderson co-penned volumes it gets MUCH better, so I look forward to finally catching up to everyone else soon and we will all wait for the final book in early 2012.
Posted by GunMetalBlue at 5:49 AM