A very light week here at Six Sentences or Less HQ. Even more so when you consider my LCS didn’t have SUPERGOD #5. So, with a mere two comics to review this week I promise you that the whole process will be relatively painless (and brief). 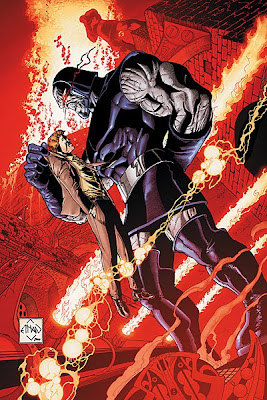 Building on Paul Cornell’s fantastic run on the life and times of Lex Luthor, this issue deals with some of Lex’s earlier run-ins with some of the DCU’s shadier muckity mucks. (Psst, you can tell Lex is young because he’s got hair!) Divided into two separate stories, each tale is designed to inform and explore the circumstances that helped make Lex the kind of person that he is today. The front half of the book deals with Lex’s first run in with Darkseid, who tricks Lex into coming to Apokolips in order to create new weapons for him. The second half of the book shows Lex under the tutelage of Ra’s Al Ghul and how Lex threw away an opportunity to become his successor because he was unable to control his own curiosity. Together these two stories remind me a lot of the Batman mythos. Substituting Lex as a stand-in for Bruce, he travels the world learning his craft and developing the skills and mentality necessary to rise to the top of his chosen ‘profession’.

Frankly, I have to ask, what’s the point of even reviewing this title anymore? It’s become some bizarre version of mad libs where every week I look for a new way to say awesome. (Fun fact: if you’re looking for a better adjective than ‘awesome’, I suggest you give up now.) What I love about this comic is how it allows Lex Luthor to grow into a person in how own right, without continually trying to define him only by his opposition to Superman. He’s still ruthless and amoral but now readers get a deeper understanding about why that is instead of just chalking the whole thing up to ‘he’s evil ‘cause he’s got no hair’. Finally we get to see a little of the nurture argument instead of putting all the responsibility in the hands of nature.

In this issue of BD J’onn J’onzz breaks free of the mental manipulation of his fellow Green Martian, D’kay D’razz. The story is nothing new, it’s a variation on the classic Alan Moore story, ‘For the Man Who has Everything.’ J’onzz mistakenly believes that his family and the Martian people have been brought back to life by the mysterious White Lantern energy. However, his subconscious starts to bleed through the fantasy revealing the painful and disturbing truth that lies beneath.

This title started off as an anthology of sorts, devoting a couple pages per issue to following half a dozen storylines involving characters brought back to life in the pages of BLACKEST NIGHT. Inspired by the success of some of DC’s weekly format series, like 52, the end results were a mixed bag of different artists backed by the same writing team. Thankfully the series seems to have found its own voice, focusing only on one character’s storyline per issue, drastically improving the flow and structure of the title and allowing great artists, like, oh say, Patrick Gleason to really shine. It’s a great opportunity to shine the spotlight on some of the DCU’s B-Listers, giving the characters a chance to succeed on their own merits, while tying the disparate storylines together under the BRIGHTEST DAY banner. This title has gone from a middle of the road read to one of the strongest, most consistent serial superhero ballads out there.