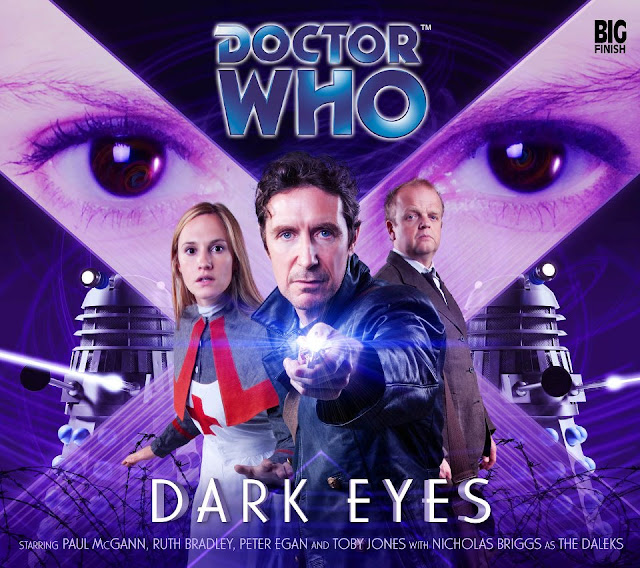 Let's begin with a small bit of history on my experience:

My DOCTOR WHO fandom stretches WAY back to being probably about 5 years old and having PBS on while my mum made dinner and watching the 4th Doctor battle Daleks or the Master. That familiar time vortex visual, the blue box, the spooky theme music, the scarf, the jelly babies. It always takes me back to that time. The DW-related phrase “watched hiding behind the sofa” definitely applied to the 5-year old me. That fandom never ended and though my knowledge and viewings of Classic Who are rusty at best, I watched it till it went off the air in the late 80’s. At the time there was no internet and all I could be was a little baffled that my show was off the air.

In 1996, at the age of 19, the BBC and FOX (of all networks) I saw that they were going to air a new TV movie. I still recall being over the moon excited. Here was this icon, one a lot of my friends here in Canada didn’t have the foggiest clue about at the time, coming back to TV for one night only. I was not only home to watch the event, but I think I may have had it on tape for a while. In retrospect, it’s has a LOT wrong with it: The Master being on trial on Skaro (the Dalek homeworld), the Daleks (the Time Lord’s mortal enemies) apparently trying a human (something they’d never do, you know... as a conquering genocidal race) and then allowing him to leave in chains escorted home to Gallifrey for death by none other than their very worst enemy The Doctor. Yeah, add to that the nutty, overacting of Eric Roberts (overacting a character who is KNOWN to be over-the-top and overdoing THAT) and you have the makings of a canon-istic DOCTOR WHO nightmare that is still argued over by fans to this day.

What they don’t seem to argue over is the canon of the 8th Doctor. Portrayed in that 1996 film (the 8th Doctor’s only TV appearance...so far) by the wonderful, adept Paul McGann. He has always been undoubtedly the 8th Doctor. It doesn’t really matter that the 1996 film itself is argued over...HE is canon.

He is canon not just because his performance was so good in that film (though it certainly was), but also due to the existence of the company known as BIG FINISH, and the fact that they set out (probably around the same time as the 2005 re-launch of the TV show and the 9th Doctor’s adventures were getting underway) to continue the adventures of DOCTOR WHO. In 2006 they broadcast the first of the 8th Doctor’s Full Cast Audio Adventures...and the series has been a hit ever since. Now I say all this in hindsight, since I’ve only as of (...*checks watch*...) just last week discovered BIG FINISH and the Doctor’s Audio Adventures (which also include adventures with the 4th, 5th, 6th, and 7th Doctor’s) for the first time. My route there was a little superficial I admit. I’ve been excited since it was announced about the 8th Doctor’s new outfit (which he had designed, the sonic even was done by WETA) about the prospect of McGann appearing in the 50th Anniversary, as I loved him in the 1996 movie. My favourite thing about the 8th Doctor is the fact that technically, historically he would have been the Time War Doctor, and the new outfit (a shorter haircut, a leather Naval Pea coat, a shoulder bag and a brand new Sonic Screwdriver) just suits that. So it was in my frequent DW Google Image searches I came across the image you see at the top of the post for the latest 8th Doctor Audio Adventure from BIG FINISH (DARK EYES) and was blown away. Wow, does he look great! So it was that I decided that the DARK EYES boxed set (4 episodes and a 5th hour of bonus behind the scenes features) would be my first DOCTOR WHO Audio Adventure.

I listened over the course of two days on my way to and from work. And when I finished listening, I put it on one more time to give it an immediate second listen. Yes, this means it was THAT good. I was in fact, so impressed after hour one, that I tweeted about it to fellow DW fans who may not have heard about it, I shouted about it to local friends and scared people at work, and I immediately began considering purchasing more. Imagine what it is like to be a fan of something and assume you’d seen or read the majority of things to do with that subject, that there was simply little more to consume and it was a wait for each new episode of the TV series...only to discover that there were YEARS worth of the series, simply in another media format. It was like Christmas and my Birthday occurred at once. That’s probably going to sound a tad obsessive....but have you MET me? I like to frighten my cat with my remote control Dalek. I own 3 sonic screwdrivers and umpteen gajillion t-shirts. I’m a DW nerd, through and through. This is what I do! 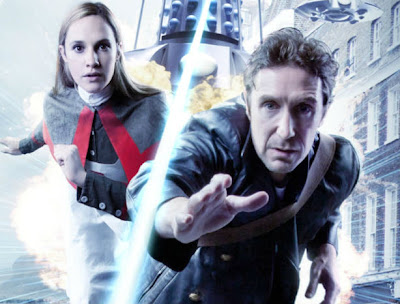 DARK EYES
I realize that my first 8th Doctor Adventure should probably not be one that’s the most recent, and especially tailing on apparently big events (TO THE DEATH), but I’m rectifying that now. After I finished DARK EYES, I bought 3 more 8th Doctor Adventures from BIG FINISH beginning at the beginning, so don’t scold me too much. DARK EYES caught my eye, so it was the one I purchased. From the very beginning, McGann makes himself the center of the story. He’s just such a commanding presence. Always has been. Even on BBC’s LUTHER I can’t take my eyes off him, he’s simply wonderful. If there is an actor who belongs next to the likes of the other men who have played the roll, it’s him. I’m convinced i could listen o him talk for hours (he narrates a few Bernard Cornwell Sharpe Books I have). In DARK EYES, the Doctor is still reeling from some pretty heady, disturbing loss and is out to search for some “hope”. He’s despondent, scatterbrained and broken. From the very first scene before the theme plays you can feel that this man is in a bad place. Enter another Time Lord (Straxus), as the Doctor attempts to go to the end of the universe to look back upon it and see how it turned out, the other Time Lord stops him telling him it’s forbidden by those that make the rules (his fellow Time Lords and the High Council of Gallifrey), but offers him hope in another way and sends him on a mission instead.

Said mission takes him to the First World War and to find the woman known as Molly O’Sullivan, though you don’t find the specifics of the mission till the second episode, it’s clears from the outset that she’s important. I don’t want to go too much into the content of the 4 episodes that comprise DARK EYES, but sufficed to say that they include the Daleks and the Time Lords in equal measure, and the story is a rip-roaring, time jumping adventure you won’t soon forget. It’s literally brilliant. Writer (and voice fo the Daleks) Nicholas Briggs has done a wonderful job of crafting a tale that is at once VERY DOCTOR WHO and at the same time emotionally resonant and compellingly interesting. I adore the tone of the story. This is the 8th Doctor and this is presumably one of the events that starts the slow and agonizing road to the eventual Last Great Time War. It’s a disassembly of this man. The 9th and 10th Doctor are absolutely, guttingly broken by the events of the Time War, the (as I’ve frequently mentioned) PTSD Time Lord. Well, at some point Eight needs to be broken. We know those events will happen slowly over time and that the Time War will be the last few straws that do it. It’s really nice to see attention to that detail happening in DARK EYES. He’s already damaged as the Time Lords continue to show their disregard for life and their machinations here are just one more example to him of how that corrupt power will feed the eventual conflict. You can see how Rassilon will eventually become the desperate man we see in the 2009 special THE END OF TIME. Eight is not fracturing yet, but the strain is beginning to show and I LOVED that aspect here. There is also plenty for Classic fans to sink their teeth into with this story arc. There are nods to previous companions (Lucy foremost amongst them obviously), and events that have occurred. When the Doctor speaks of the Daleks (for example) he says how they were created by a madman for one propose and one purpose only, and later on mentions the Kaleds. It was a small moment that for any Classic Who fan brings to mind the 4th Doctor and the GENESIS OF THE DALEKS. There’s plenty of running (which I always love) and oodles of time jumping.

The acting is wonderful across the board. Everyone brings their A game and I swear to you that if I didn’t know better and I closed my eyes I could have been just been watching episode on TV with the visual. And I suppose that’ the point isn’t it? Well, Briggs and Co. have totally pulled it off. Paul McGann and Ruth Bradley especially make this just a great outing all together. I relished every moment I got to spend with the Doctor and Molly (not to mention Straxus, the Dalek Time Controller and even the villainous Kotris). On par with any of the episodes of the Re-launched TV series, BIG FINISH Audio Adventures are an absolute joy for the casual fan and a dream come true for the die-hard fans. DARK EYES was a wonderful experience and obviously it was one that caused me to begin buying the other Audio Adventures. You don’t have to start this far into the series and it’s probably a good idea to go back and start at the beginning of Eight’s Adventures...BUT, if you are at all on the fence about the ideas of the format, then give DARK EYES a go.

The Audio’s are assembled and edited with such a splendid eye as to be seamless from track to track. The music is lovely, bombastic when it needs to be and emotional when it needs to be, and is again seamlessly integrated with the special effects and the dialogue. It’s worth noting that the post production is damn near flawless as I never felt that I was listening to something with “tracks” and always felt like the whole hour was one large chuck with no dividers. These people know what they are doing and this speaks highly of the post-production team involved who do just a stellar job!

As for myself, like I mentioned earlier I’ve gone back to the beginning of Eight’s Adventures now. I’ll be listening to the two-part BLOOD OF THE DALEKS this coming week and will be reviewing that as well when done. So stay tuned for that!

And if you’ve not discovered them yet, please go to the BIG FINISH website and have a gander at the DW Audio’s they offer. There’s an entire library of them and any DOCTOR WHO fan would think they’d died and gone to Valhalla. They are reasonably priced, offered in CD or Download format (Collector Note: buy the CD and you get the Download as well) and buy purchasing them you will be assuring that they will continue bringing us the Doctor’s Adventures in this format and keeping us entertained.

Posted by GunMetalBlue at 7:24 PM