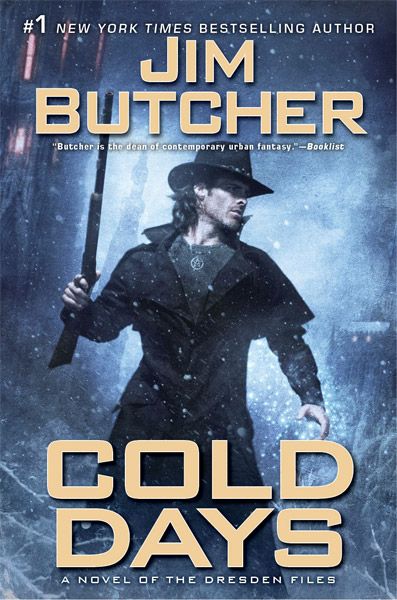 After being murdered by a mystery assailant, navigating his way through the realm between life and death, and being brought back to the mortal world, Harry realizes that maybe death wasn’t all that bad. Because he is no longer Harry Dresden, Chicago’s only professional wizard.

Of course, it won’t be an ordinary, everyday assassination. Mab wants her newest minion to pull off the impossible: kill an immortal. No problem there, right? And to make matters worse, there exists a growing threat to an unfathomable source of magic that could land Harry in the sort of trouble that will make death look like a holiday.

Beset by enemies new and old, Harry must gather his friends and allies, prevent the annihilation of countless innocents, and find a way out of his eternal subservience before his newfound powers claim the only thing he has left to call his own…

Only once before during my obsession with Jim Butcher’s DRESDEN FILES have I found one of the books on the shelves early (CHANGES), I proceeded to lose my shit for a moment in the bookstore, squeeing like a Twilight fan, came to my senses, collected myself and walked calmly and confidently up to the counter hoping against hope that they didn’t realize their mistake in putting it out early. They did not and I escaped with my purchase in hand and scampered down the street to get home and crack it open. Well, make that twice now. The latest (14th) DRESDEN FILE titled COLD DAYS, was out over a week early at my local bookstore. I stumbled across it almost by accident…and then repeated the above procedure amplified by ten.

COLD DAYS follows on a book where Harry Dresden has spent a while in a sort of dead not-dead ghostlike state. In such a situation it means that the majority of his friends (even though he saw THEM in GS, they did not see him) have not seen him since he was shot and presumably killed at the end of CHANGES. It turns out they went to his funeral and have spent months mourning their wizardly friend. For his part, after being saved by the sentient, genius loci island Harry calls Demonreach combined with the machinations of Mab (Queen of the winter Fae), he has survived his ordeal and been nursed back to health and in return has taken up the empty Winter Knight mantle (last occupied by the evil Lloyd Slate, who Dresden killed in a previous book) and now works for Mab. So the book starts in the Nevernever and more specifically in the Winter Palace called Arctis Tor. It is there that he spends months training to be Mab’s Winter Knight in which she tries in every elaborate way to kill him to hone his skills…he hopes.

That’s enough plot for you, you plot-mongers. I refuse to take away from you what will inevitably be one of your favourite reads in the entire series (after finishing it I easily placed it at #4 in my rankings, behind PROVEN GUILTY, DEAD BEAT, and CHANGES) so stop looking. No more spoilers, not even minute ones.

What I’d like to tell you about COLD DAYS is that it’s a nice nod to the beginnings of the series. Even though Harry has long ago stopped doing regular P.I. work, this book contains a plot that includes a numbers of villains and thugs, a tight timeline or things go boom, and even a kidnapping or two. It’s a kind of classic look back at Dresden through the eyes of who he has become 14 years on. The long established cast of secondary characters are once again featured (almost in full, though no Marcone in this one sadly), and there are a few new faces to see as well.

If I had to call this book a spiritual successor to one of the previous volumes, it would definitely be SUMMER KNIGHT. There are events in this book that directly reference the events in that book. Especially the ending of SUMMER KNIGHT, so prepare yourselves for a crash course in your own memory, not that Butcher doesn’t fill the gaps though.

It’s funny, as much as a book like CHANGES was a game changer in the series, I feel that there are one or two events in this book that would stand a hundred feet taller over the game-changing events in CHANGES, look down upon those events and laugh heartily while showing us all what a REAL game-changer looks like. Yeah. It’s THAT staggering. It’s also executed so cleanly on Butcher’s part that I didn’t see it coming for one moment before it happened. When it happened I sat there gobsmacked, gooseflesh and all. Basically what this means for the series is that there are a couple of chapters in this book that will be known as defining moment in the storyline and have ramifications for the long arc.

Harry’s relationships are further tested with even things as simple as everyone having thought him dead, and where he’s been in the months he COULD have called from Arctis Tor and didn’t, are shown in a realistic and human light. It’s really interesting to see how each of his friends reacts to that differently. There is also a broadening of older characters. Mac (of Macanally’s Pub) for instance get’s some cryptic, but ultimately interesting growth here that makes you realize he’s not just a guy who runs a pub. It’s also interesting to note that the events of CHANGES and at Chichen Itza have taken enough toll to still be affecting people, like Molly. The gravity of that weighs heavily on Dresden, but he’s also learning his lesson about not letting people in to try to keep them safe. Especially with people like Molly and Murphy he’s come to the conclusion (about time Dresden!) that keeping them out of the loop to keep them safe is not really the most ideal plan.

The pace, I don’t think I need to tell you, is a rocket-shaped madness that will grip you by your unmentionables and pull you along until done. No seriously. I read it in less than 2 days. 515 pages of pure, unadulterated Dresdencrack injected directly into your thinkymeatz. If you are a fan I don’t need to explain that to you. If you’re not a fan or haven’t read the books, what the hell are you doing reading a review of the 14th book?

This book is simply stellar. How Butcher can continue to surprise and amaze me fourteen books in is a feat I’ll never understand but he does it. Every. Damned. Time.

And now, I only have to wait a year for the next one. Sigh.
Posted by GunMetalBlue at 7:06 AM