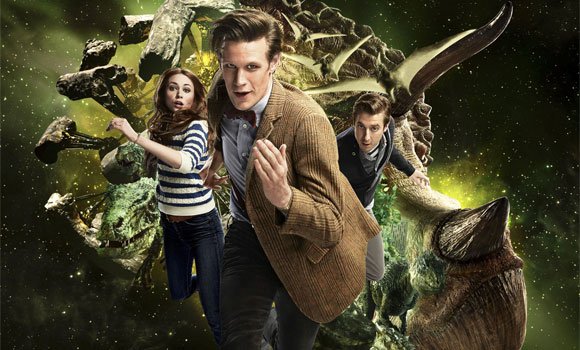 Since I was attending TIFF and doing a multitude of reviews for that I didn’t get a chance to properly do my weekly review for DOCTOR WHO (namely episodes 2 and 3 which aired during TIFF), both of which I watched.

So, consider this a two-fer review for both DINOSAURS ON A SPACESHIP and A TOWN CALLED MERCY.

DINOSAURS ON A SPACESHIP

This episode is a little more bombastic and less introspective (at least initially) than the Series opener ASYLUM OF THE DALEKS was. I mean let’s run down the list of things in the ep:

- Big Game Hunter reminiscent of someone from a Wilbur Smith novel? Check.

- Indian Space Agency defense force threatening to destroy the ship and dino’s to save earth from collision? Check.

So yeah, a bit of a dogs breakfast with all the bits in. What makes it actually succeed is the clever writing and the acting across the board. This is not to say that it doesn’t contain things that are odd (Rory’s dad seems to take about 15 seconds to drink in the fact that not only is he in space but also that his son and daughter-in-law have been traveling with a man in time and space saving worlds…which kind of bothered me a bit), but that it contains enough good old fashioned adventurous DW to make it well worth your time.

First up, the side character the Doctor calls on for help, Nefertiti and Riddel are worthy of the temporary companion roles, and a big notion here that will jump out at the informed (AKA those who know that Amy and Rory’s time in the TARDIS is ending with Ep 5) is that the Doctor (who has been without regular companionship for roughly 300 years by the time that last Series CLOSING TIME aired) is starting to show the wear and tear of travelling on his own (which always seems to produce an angrier, and more unrepentant Doctor…like the 9th in DALEK or the 10th in THE RUNAWAY BRIDE) and seems to be at least attempting to supplement the frequent absence of Amy and Rory in his life. That’s a good thing, and it is the reason that both Nef and Riddel are present, but it’s not really working that well. The Doctor shows his unrepentant side on the pirate Solomon and allows him to basically die. It’s a telling moment, but for those speculating that this has never happened before and think the Doctor is not acting like himself… you are quite wrong. Throughout his history (in relaunched Who if not older Classic Who) the Doctor has showcased unrepentant anger, and vicious retribution on people when he’s not travelling with companions. Heck, 11 showed it early on with Amy (THE BEAST BELOW). It’s part of what makes him who he is. The companions temper him, and without them he can become cold and distant. This is what has happened, and I’m happy to see this particular personality trait return. It shows that Moffat and Co. haven’t forgotten it. It also seems to show us how unwilling The Doctor is to let the Ponds go, whereas when other companions have gone on to other lives (willingly or unwillingly) in the past he usually accepts it and moves on. With the Ponds it’s like he clinging to them, and that’s interesting considering how aloof he can be.

DINOSAURS ends on a bleakish note with the Doctor’s anger on display, but it was a fun, and adventurous episode all told and a great way to spend an hour. It’s certainly showing that Series 7 is already kicking Series 6’s ass in the entertainment dept. The standalone nature of the eps (with teeny tiny arc threads) is truly brining us back to a more solidly grounded, uncomplicated DW. And that’s a good thing. 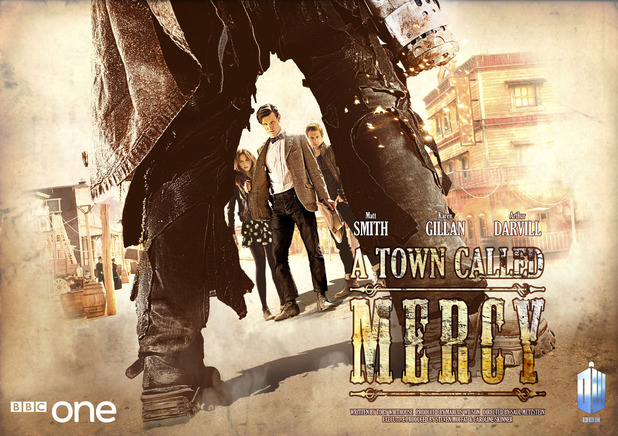 This one I liked. I liked it a lot. But my reasons for liking it aren’t the old west town with the anachronistic tech, or the cowboys, or the gunslinger cyborg, or even Ben Browder.

No, my reasons for liking it stem from the alien doctor named Kahler Jex. And more over what he did.

You see Kahler Jex is essentially a war criminal, though he is not thought of like that by his own people. He stopped a war on his planet that was killing millions by experimenting on a number of the inhabitants (under false pretenses) and creating killing machine cyborgs, who eventually stopped the war by virtue of being unstoppable. Though the war was stopped, Jex was ashamed of what he had done and he fled to earth and took residence in the town called (you guessed it) Mercy. There he gave them electricity and running water, and cured Cholera and basically tried to forget what he had done while at the same time pay his own penance for his crimes against those experiments. Well, of course one of them comes look for him and wants to kill him, but doesn’t want to harm the other inhabitants of Mercy.

It’s compelling because once the Doctor learns what Jex did, out comes the angry Doctor again…no less angry than he was on the last episode, but no further. That is until Jex talks about how similar they are to one another. And that hits home for the Doctor who has been told (most recently by Davros in S4) that he crafts weapons out of his companions to do his killing for him. The Doctor tells him that he doesn’t get to choose his own form of punishment, that’s not how this works. He needs to answer for his crimes, even though they stopped a war.

But what really rocks the Doctor back and sets his anger to overload is when he realizes that he really IS NO different from Jex in that facet. The Doctor locked the Time War out of reality, resigning two entire races (the Daleks and the Time Lords) to an eternal state of hell. He essentially (to stop the aggression that threatened to destroy the universe) made the decision to do this on his own, and that falls on him. It’s almost a worse act of war crime, and what’s worse is he KNOWS it. So he snaps and manhandles Jex out to the edge of town past the barrier that the Gunslinger won’t cross and points a gun at him to await his death at the hands of his creation.

WHAT?! You say…The Doctor and a gun? Yes.

Probably my favorite thing about the episode is this moment. And Amy even comments on it (“You see? This is what happens when you travel alone for too long!”). The Doctor, (the man who never would) hasn’t held a gun up to someone since he was at his wits end in THE END OF TIME PART II and Rasillon was threatening to bring the Time War out of the lock and bring about the end of time. So couple that with this moment where Jex has reminded him of his own digressions against not just one but two races of people. It’s poignant and is the likes of which we’ve not seen since RTD gave us the PTSD Doctor (9th Doctor). Being brought so entirely low it is only Amy firing off a gun that brings him back. But not after he tries to defend his actions by mentioning his “mercy” of the Daleks, the Master ect. It’s a key point for him to do so. It shows that the Time War was exactly what he was thinking about (since both the Daleks and the Master were heavily involved in that era of his life) when he was railing at Jex.

So in the end A TOWN CALLED MERCY ends up being a great standalone, with a darker yet still entertaining story…but the core of it is this interaction between the two doctors and their crimes…and then you have Amy telling him he’s traveled too long alone…and finally the parting shot of Amy (when asked to keep traveling) turning him down and talks about their friends might start to see them age faster. The Doctor’s face is priceless in that shot. He knows the trips are getting less frequent with the Ponds and that a time will come soon when he is utterly alone.

As a final note: Hopefully everyone has noticed that the titles sequences (aside from being slightly different with the logo being tailored to fit the theme of the episode)  started slightly murkier than past years and have been getting slowly darker and murkier with each episode. The running theory is that this will continue to happen until Ep 5 (THE ANGELS TAKE MANHATTAN, and the Ponds exit) where it will pretty much be just a murky black screen with the music playing and white titles. Or it could be leading to something more ominous down the line. Either way, I think it's a nice little mystery.
Posted by GunMetalBlue at 7:29 AM