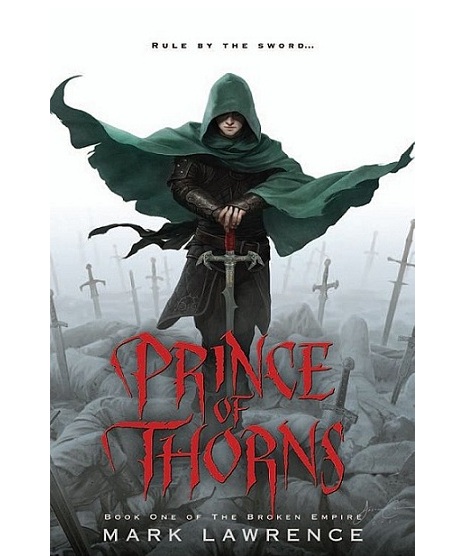 When he was nine, he watched his mother and brother killed before him. By the time he was thirteen, he was the leader of a band of bloodthirsty thugs. By fifteen, he intends to be king...

It's time for Prince Honorous Jorg Ancrath to return to the castle he turned his back on, to take what's rightfully his. Since the day he was hung on the thorns of a briar patch and forced to watch Count Renar's men slaughter his mother and young brother, Jorg has been driven to vent his rage. Life and death are no more than a game to him-and he has nothing left to lose.

But treachery awaits him in his father's castle. Treachery and dark magic. No matter how fierce, can the will of one young man conquer enemies with power beyond his imagining?

There are times that I get so bogged down in my ToRead pile, upon which sit many purchased hardcovers and paperbacks, and a few advance copies, that I neglect books that have been given my fellow bloggers’ seal of approval.

There are also times when the controversy surrounding a book and its subject matter are such that my mind quirks that it may or may not be worthy of such attention.

Mark Lawrence’s novel PRINCE OF THORNS is one such volume. It both slipped through my reader’s cracks, as well as tweaked my interest due to the buzz around how dark it was. So I knew I would get around to reading it, the question was…when?

I’d gotten three quarters of the way through another book, and found it wanting…so I finally decided to pick up PRINCE OF THORNS.

And in a similar vein to folk like Aidan over at A Dribble Of Ink, after about 10-15 pages I wondered what the heck I’d gotten myself into. A protagonist who was leading a gang of criminals who raped, pillaged, thieved and killed at will. How am I meant to get onside with such a protagonist?

But the key lies in trusting Lawrence. Through a series of flashbacks to “Four Years Earlier” amongst other revelations that come as the book wends on, the author establishes that things may not be all that they seem…but furthermore a protagonist who left home at ten and was basically raised amongst the criminal element would see that as how to live ones life. There is a darkness to fourteen-year old Prince Jorge that is a tad unexplainable, but only at first. Through these flashbacks things begin to become clear and your mind is inexorably changed to see things you didn’t see in the first 10-15 pages.

In a nutshell, had I read this book in 2011 when it came out I’d have called it the best book of that year. Easily, hands down winner. It makes me wish I had read it then. It’s phenomenally written with a prose that is clean, and efficient and yet it still manages to be evocative when it needs to be. The characters are vividly painted with members of Jorge’s Brother’s fleshed out well in both the narrative as well as the little chapter preludes, my favourite of which concerns a small bit of dialogue from a future trial of one of the characters. The old Captain of his father’s guard, Makin and a former prisoner from his father’s keep whom Jorge saved named simply Nuban come out on top as memorable…but lesser characters like Jorge’s father King Olidan, a mutated demonlike being called Gorgoth, and even a little irradiated prophetess are well rounded, fleshed out characters.

Jorge’s Broken Empire is just over a thousand years removed from “The Day Of A Thousand Suns” which over time it is made clear this is a future version of our earth and things like classic books, aspects of religion and the like are still remembered, if not perfectly. The nods to the reader about this are subtle at first and you get to enjoy a little moment of "Aha!" which was nice. Split into many factions always vying for power, Jorge’s ultimate goal is to unite the broken pieces and rule over everything.

The action. Oh sweet lord the action! There are action set pieces in PRINCE OF THORNS that are so fluid that I raced through them at top speed, devouring pages at a ridiculous pace. Nothing is tacked on and you feel every crossbow bolt, every knife sliding across a neck, and every sword punching through mail. Though our heroes aren’t really heroes at all, they are at least very good fighters. The villains are utterly evil, and the specific ones that Jorge deals with directly are sometimes just as clever as he is, if not in some cases cleverer…but most of them don’t have his set of cast iron junk and so he has that going for him. It’s really nice to see the back and forth between Jorge and his enemies as it always rings true to a conversation a well-versed teenager (which is what Jorge is) who just doesn’t give a shit would have with an adult who expects him to give a shit. He actually gives less than a shit, and that’s part of what makes him so damned compelling.

I seriously can’t say enough good things about this book. I immediately ran out and bought the hardcover sequel as I can’t wait to dive into the next bit of the tale. I think the best praise I can give it is this: I LOVE Jim Butcher’s Dresden Files. Love them. They are like a drug to me when I read them. I am mesmerized and blown away by every page of that urban fantasy series. I salivate for more every time I finish one. Mark Lawrence’s PRINCE OF THORNS is a straight-up-fantasy version of that desire in me. It’s reads like and is as addictive as Butcher’s series, simply in a full on fantasy vein instead of urban fantasy. It is, for lack of a better word, spectacular. An utter triumph of storytelling, and once you get past initial reservations about the darkness of the character you seriously won’t be able to put the bloody thing down. I myself was reading it at nearly 1AM last night (this morning) to finish it as I had to see how it ended.

If you’ve not yet read this book, do yourself a big favour and rush out to grab it (it’s in paperback now, so you have no excuse!). This is how fantasy is done right. How fantasy is done not only right, but with a flair that beggar’s imagination.

Seriously. So Good.
Posted by GunMetalBlue at 6:31 AM