Movies Musings: THE KIDS ARE ALL RIGHT 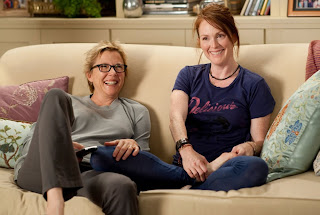 THE KIDS ARE ALL RIGHT is an examination of the changing makeup of the family unit told through a faux Indie lens.

Mark Ruffalo's character seems to unfairly bear a disproportionate amount of the blame for bad decision making in the film and indeed he is punished by not being given any meaningful resolution to his character's storyline. Which, in hindsight, makes him less of a truly nuanced character and more like a convenient (and cuddly) tool for the screenwriter to disrupt the status quo and generate some conflict.

KIDS is a solid movie that manages to be serious and dramatic without being grim and tedious. It punched above its weight during award season, but don’t let such a mealy-mouthed endorsement of its worth throw you off.