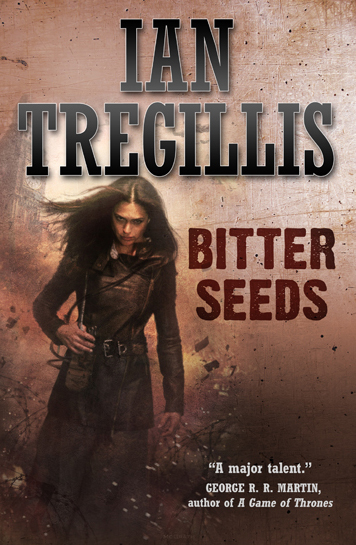 It’s 1939. The Nazis have supermen, the British have demons, and one perfectly normal man gets caught in between

Raybould Marsh is a British secret agent in the early days of the Second World War, haunted by something strange he saw on a mission during the Spanish Civil War: a German woman with wires going into her head who looked at him as if she knew him.

When the Nazis start running missions with people who have unnatural abilities—a woman who can turn invisible, a man who can walk through walls, and the woman Marsh saw in Spain who can use her knowledge of the future to twist the present—Marsh is the man who has to face them. He rallies the secret warlocks of Britain to hold the impending invasion at bay. But magic always exacts a price. Eventually, the sacrifice necessary to defeat the enemy will be as terrible as outright loss would be.

How can you tell when a book has really affected you?

By the quality and quantity of “Book Hangover” you get after finishing it. Basically that great gaping, sucking hole you experience after a particularly fantastic read. The kind that makes it very difficult to read anything else afterwards because the reverberations of the narrative are still rattling around in your skull. Basically leaving that world behind is tough.

I experienced this with Ian Tregillis’ Alt-history / Urban Fantasy / Sci-Fi novel BITTER SEEDS. The first in his “Milkweed Triptych” series, the novel is a look at WWII-era Europe. In this version of the events, the Nazi’s have spent the last 20 years or so perfecting the Super Soldier. Through conditioning from childhood with kidnapped orphans, and including attaching battery-run electrodes directly into the skull and into the brain itself, the Nazi’s have been able to create people who can walk through walls, set things on fire, become invisible, and even see the future. Set against this is a secretive portion of the War Office in Britain where a discovery is made that for centuries mad British warlocks have been summoning/negotiating with entities that could only be a cross between Lovecraftian gods and Demons. They decide that their only chance of stopping the Super Soldiers may lie in dealing with these otherworldly creatures and attempt to wrangle them into service. But the price they require of humanity is high.

The book was an absolutely unexpected treat for me. I picked it up on a whim having heard scattered good things about it, and didn’t think I’d get much from it. The book totally surprised me though and was totally gripping from the outset. Very descriptive without falling into overdoing-it territory, with a cast of characters that it was easy to get involved with. No one was cardboard and even the smallest character was given enough depth to be cared about.

The setting of WWII Nazi Germany and Blitz-era London are both quite well realized and never feel Alternate. Basically the alternate reality stuff is fused quite well into existing history, up to and including major events, like the Russians pushing towards Berlin causing all sorts of havoc on the German home front. I was talking the other day with an historical fiction author and I said that it was KEY (from the Reader point of view) to try to write your story and weave it into existing events otherwise you lose credibility. Well, Tregillis does this SO well that I began to imagine that the ideas of Nazi Supermen and British Warlocks dealing with Ancient Gods actually COULD be what happened. He basically makes it all seem quite feasible.

The characters within the pages (British and German alike) are so well crafted with realistic human style reactions to the events that I was truly impressed all the way through. In the characters of Marsh and will you have what are essentially old college buddies, who throughout the war begin to change as a result of their respective duties. When that relationships begins to fray around the edges you really FEEL it. The same goes for the German characters of Reinhardt, Klaus and his sister Gretel. While they are on the villainous side, you can feel as they go through their lives attempting to understand that they are just weapons to the German High Command and nothing more. The only one who realizes is the sociopathic, future-seeing Gretel, but even she hides her own ulterior motives. They feel suitably evil for what it is they are doing, but there was also a growth there, largely in the form of Klaus (who’s eyes we see through most often). It was a compelling aspect of thew narrative to have such insight into the villains of the piece.

Overall, I was wholly impressed with the book. Once it gets going and you get the German call signs and speech patterns under your belt, and things really pop off then the pace shifts into high gear and is relentless. I found it a very difficult book to put down at times because I always wanted to find out what came next.

The ending is a standalone result, and some of it is not at all what I was expecting. Some of it even decidedly uncomfortable to read (but in a good way), and then there is a cliffhangery aspect to the last bit. But it’s not enough of one to mean you HAVE to read the next volume…

…Ah, who am I kidding, if you read BITTER SEEDS you will be like me and chomp at the bit to read the sequel THE COLDEST WAR (which comes out tomorrow thankfully!). A very well-written Alt history sci-fi book with believable characters, a hell of a setting and a infinitely fascinating premise, I’m upset with myself for having waited so long to get around to it. A real triumph!

Posted by GunMetalBlue at 10:07 AM