A Year Of Tolkien: The Silmarillion 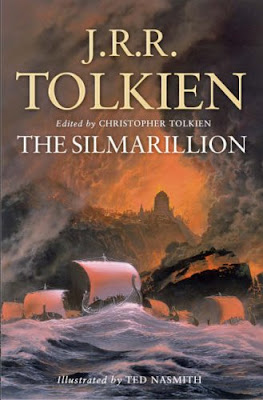 It’s not really that rare to find me daunted and scared off of reading a book. I wish it were rare, but I am a creature of habit and if I think I won’t enjoy something for being too complex, I will usually be able to convince myself of such. What will normally bring me back is endorsement. When people sing the praises of said complex book and tell me it’s well worth it...I will normally reconsider. I read J.R.R. Tolkien’s THE LORD OF THE RINGS the first time I was in my early teens, and I loved it. I do believe that it was my doorway into liking all fantasy as a genre. So when I looked up other things written by the author I found (well, first I found THE HOBBIT naturally) a novel he worked on for most of his life which was about the First (and Second) Age's of Middle-Earth as told by the Elves (Firstborn), and it was called THE SILMARILLION. Now as I previously mentioned I was spooked off this book due to overwhelming opinions of friends and family that it was a singularly difficult book and reads like a religious tome with long passages of umpteen names and places and even long-winded geographical descriptions.

The bad news: It is all those things.

The good news: IT IS ALL THOSE THINGS!

Had anyone told me when I began this book that I would find myself grasping a large cast of characters including gods, elves, dwarves, and men…all with multiple names…let alone getting a grasp of the Elvish language itself (Sindarin at least), I’d have called them nutters. But I did. And mostly this is thanks to Tolkien Professor (Corey Olsen), and his Podcasted Silmarillion Seminars with his students, the Silmarillionares. Their insight from chapter to chapter coupled with Olsen’s broad knowledge of the text itself meant I had little to no problem with the book whatsoever. It’s not an easy book to read and large chunks of it are in metaphor and the like…but I kid you not once you get down who the people are, and what the map looks like and how the world works, you will be just fine.

Once I realized I had a grasp of what was going on, everything after that was pure cream. These stories from the elder days (as told by the Elves) from the genesis of Arda by Eru (the One) also called Ilúvatar and his Valar (godlike beings created from his thought), through the rise and fall of the various Elven kingdoms in the West and in Middle-Earth, of Beleriand, of the Númenoreans and even of portions of the 3rd Age. These are all as enthralling (if not more so) than anything Tolkien wrote in LOTR. The heroes are grandstanding, oath-keeping; blustery legends, and the villains are dastardly, oath-keeping, monsters driven by desire and evil. The tales herein are wonderful, and tragic, and heroic and worthy of the annals of Middle-Earth history. And though they can be read as separate stories, they all have been woven together into the most unassumingly clever narrative to encompass an astonishing tapestry.

Where I think I will personally benefit most from this book will be when I get to my (Year Of Tolkien) Re-Read of both THE HOBBIT and THE LORD OF THE RINGS, because Tolkien peppered those tales with much of this history I’ve just read. I now know where the wizards came from and who Gandalf and Saruman really are. I know what Moria used to be, and how it came to be as it is in the 3rd age. I know of the origins of Balrogs, Orcs and Wargs. I know who Beren and Lúthien are and why their tale is so important to Aragorn and Arwen. I know of the terrible oath that Fëanor and his sons took which would have repercussions for all the Elves of Middle-Earth. I know of the glory of Fingolfin and his son Fingon, the bravery of Finrod Felagund, the forethought of Turgon the Wise and of his gorgeous city hidden in the mountains called Gondolin. I know how the White Tree of Gondor ended up there and I know what it represents. I know the bittersweet tale of Túrin Turambar and his dealing with the dragon Glaurung at the caves of Nargothrond. And I know of Morgoth (who is also Melkor) the first Dark Lord who sewed dissent, divisions and wrought horrible doom on the inhabitants of Middle-Earth from his mountain fastness of Angband and on Angfauglith the gasping plains that fronted it. This may all be jibberish to you, but trust me that once you’ve gotten into this book it will be very difficult to put down. All these names will make sense and the majority of it will be as epic as anything that happened in the War Of the Ring. You even get to see the genesis of Sauron himself and learn of what happened during the Last Alliance of Men and Elves. You get to see the fabled Númenoreans (Atlanteans) who ruled from an island close to that of the gods, which sunk beneath the waves in a great cataclysm, and how those survivors would go on to found great kingdoms of Men. I know what that the giant statues called the Argonath that stand to each side of the Anduin and guard the way represent and why they are important. The list of things you will learn in this book is endless, and for a fiction and history buff like me it's excellent.

Reading this book was like being given a cheat sheet to all the random mentions in the LOTR and THE HOBBIT. This is the cipher, and it’s so wonderful that I very nearly flipped back to the first page and read it all over again right after I finished.

It’s a stunning testament to the work that Tolkien put into his world. The depth of world building is so great that one wonders how he kept it all straight. I can even say that this seems to be one of the earliest examples of world building on this level, and that Tolkien must be the yardstick upon which to measure other fantasy worlds.

Full of thunderous clashes of great wills, heartstring-pulling emotion, grandiose battles with legendary warriors and weapons, and quiet introspection THE SILMARILLION is everything you would want it to be. If you read his other work, don’t be scared off by the complexity of this volume, for once you get your bearings the book will rocket away and take you to some truly amazing places.

NEXT TIME (in the Year Of Tolkien): UNFINISHED TALES
Posted by GunMetalBlue at 9:00 AM

Email ThisBlogThis!Share to TwitterShare to FacebookShare to Pinterest
Labels: A Year Of Tolkien, J.R.R. Tolkien, The Silmarillion