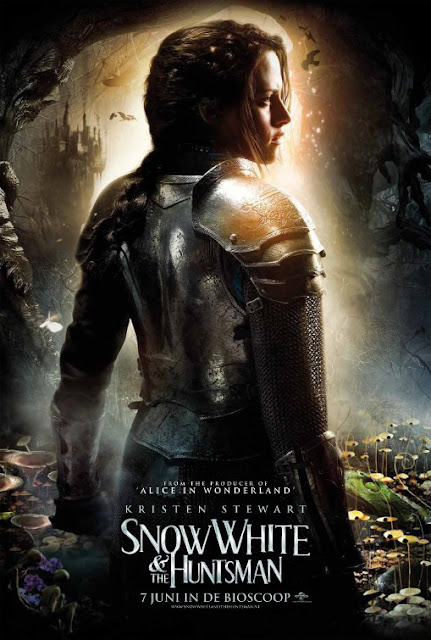 When I first saw the teaser trailer for SNOW WHITE & THE HUNTSMAN I was...suitably intrigued. Here was another of the recent re-hashing’s of classic Grimm fairytale stories. What was truly interesting about it? The apparent reverence for the dark and frightening nature of the actual tale itself as told by The Brother’s Grimm. It is probably a decently known fact at this point that these tales we all grew up on are actually a fair deal darker and more gruesome and realistic than we remember them...let alone how they’ve been presented to us for years. This is not the sweet Disney princess of your childhood. This is the bereft broken daughter of a benevolent king who has been imprisoned, tortured and deconstructed by an evil queen. This is the story of the same princess who escapes and ends up leading armies against said evil queen.

The short story? I adored this movie from beginning to end.

Where this film immediately jumps out at you is the attention to period detail. This would look at home in any collection of medieval films, from costumes to attention to period beats in the script it succeeds. The script is especially well realized, and I want to give you an example as to why/how:

Early in the film after she escapes and is found by the Huntsman, Snow White’s dress is mired and ripped in the dark forest swamps and The Huntsman turns, pulls out a dagger and slices/rips the whole lower half off exposing the leather leggings that she was wearing beneath. She gives him a quick “look” and he merely looks at her and says “don’t flatter yourself”.

This is a key example of a screenwriter being aware that everyone doesn’t always say everything they are thinking. I hate it when movies have people say everything to “explain” the scene to the viewer. We are not stupid and a script should not treat us as such. Time and time again throughout the entirety of SNOW WHITE & THE HUNTSMAN I kept thinking to myself “Wow, this script is smart and doesn’t treat us like idiots.” And I really truly liked that. Kudos go out to the writer Evan Daughtry on that score. Secondly, first time director Rupert Saunders should be given the ol’ pat on the back as well as he’s crafted a film that is utterly dark, dramatic and grounded in enough realism to make it very believable, and totally entertaining to watch.

Both the leads Kristen Stewart (who I now officially have a crush on) and Chris Hemsworth do a great job and with the stellar nature of the script seem to walk their scenes with ease and because of that it never feels forced. It really does feel that these two are escaping together. Charlize Theron should not be overlooked here simply by the very facet of her acting skill. She’s literally terrifying in certain scenes and comes of as a very well realized villain. It’s funny, but here’s how in tune I was with the script: at one point guards bring in the “mirror” (a round rune-inscribed gold plate) and after they position it she says sternly “Get out.” And as I sat there I thought, she should get really mad at how long it’s taking them to vacate the throne room..and seconds later she screams “GET OUT!” as top register. Perfect! I love that sort of thing. Lastly on characters, the dwarves are literally a who’s who of British Thespians and every last one of them gives every last scenery chewing ounce to their smallish roles. I won’t tell you who they all are because that would ruin the surprise I got at recognizing them, but sufficed to say they are great!

There is a faerie wood in the film and I swear if Japanese director/writer Hayao Miyazaki ever had the chance to shoot a live action film I swear it would look like this. It was lovely, and quaint and cutesy...and it all works. I mean faeries in the film ride forest creatures like rabbits and it never feels cheesy. There is a reverence there that I can’t exactly explain. This is up to and including a forest spirit that could have jumped from the screen from PRINCESS MONONOKE and I swear when it showed up my heart skipped a beat and my smile was a mile wide.

James Newton Howard scored the film and I swear he outdid himself here. Every note is pitch perfect and the score rolls from sequence to sequence with ease. It never feels like a different entity and melds into the film itself in subtle and bombastic ways equally. The softer bits are lovely, and the louder action bits crash and resound with glory. The whole thing really came together for me late in the film when a fireside-dirge is sung by the dwarves and is picked up by a female vocalist on the soundtrack and carries over into the next scene and lends it such an air of emotion that I was stunned. To tell you how much I enjoyed the soundtrack, as I sat in the theatre seat and the credits rolled I booted up my iPhone, logged onto iTunes and bought it right then and was listening to it on the way home.

The film is easily the 2nd best film I’ve seen all year so far after THE AVENGERS, and is one that I wager I’ll want to see again soon. It also sounds as if the public agrees with me. For weeks nothing has been able to take a bite out of the box office because of the juggernaut known as THE AVENGERS, but SNOW WHITE & THE HUNTSMAN has done just that and as of Saturday it had made almost 60 million worldwide and is apparently on its way to 100 million by the time Sunday night’s receipts are calculated. It would appear if we have the summer’s second bonafide hit on our hands and it could not be more deserving in my humble opinion. A dark, realistic and dramatic retelling of the Snow White tale, filled with action, stunning visuals and emotion, this film is bound to entertain even the most discerning viewer. Get out there and see it!
Posted by GunMetalBlue at 2:00 PM