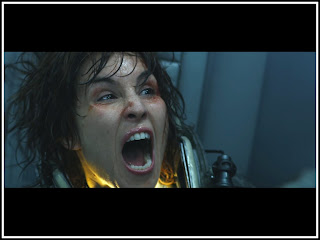 PROMETHEUS isn’t ALIEN, and despite all the similarities in form and content it’s not really trying all that hard to be ALIEN. BUT it does work at ticking off all the relevant ALIEN boxes
The movie seems more concerned with reaching a certain ending and less concerned about how it jerks around the characters and the film’s sequence of events in order to get there.

(On a much more nit-picky level there are several straight up grade school logical inconsistences in the movie. When contacting an alien culture for the first time, who cracks open their helmet on a whim just because the air is perceived as being breathable?! The scientific method has failed these future scientists. Failed them hard.)

PROMETHEUS riffs on variations on an already established theme, but really fails to carve out new material to add to the ALIEN mythology. Yes, there's some stuff happening there with the Space Jockeys, and that’s all well and good, (and interesting) but even that's not something I would classify as new.

If anything, the film's reliance on ticking boxes and getting some interesting scare moments muddies the crisp, linear understanding of how the xenomorph world functions.

BUT. DESPITE ALL THAT. I liked it. It was interesting. Enjoyable to watch. And I STILL jumped out of my seat on more than one occasion.

As long as I liked the end product, and I did, the rest is just quibbling over the expectations I carted into the theatre with me before the first frame had even rolled.