A Year Of Tolkien: The Plan 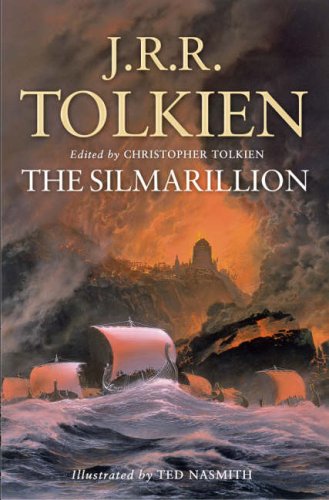 This is something I was planning on doing in the latter half of 2011, and it’s probably a significantly daunting task to set myself for 2012 when we near summer already, but I’m going to do it anyway.

I’m going to read the entire history of Middle-Earth starting with THE SILMARILLION. The plan is to try to get the majority of it read (and this includes a re-read of both THE HOBBIT and THE LORD OF THE RINGS) before the December 14th, 2012 release of Peter Jackson’s THE HOBBIT: AN UNEXPECTED JOURNEY debuts in theatres.

Now, I didn’t come by this course of action flippantly. I’m a fairly big fan of both THE HOBBIT and THE LORD OF THE RINGS and I knew there was a lot of periphery material. Chief amongst those is of course the complex history of the shaping of the world and the First and Second Age of Arda (and Middle-Earth) as seen through the Elves called THE SILMARILLION. Now, I have been told for years by many sources that this book is singularly difficult to get through as it reads more like a religious tome, filled with hundreds of names, places and events and even a lot of somewhat abstract concepts. It’s considered dense and not at all for the faint at heart or the casual reader. So I’d wager I’ve been scared off reading it ever since I was in my early twenties (when I first contemplated it). I’m no stranger to complexity, but this just sounded like a lot of work.

Then one day I was doing my daily reading over at TheOneRing.net and noticed that a poster over there had been doing the same contemplation, but had the same initial trepidation. There was light on the horizon though, in the form of Professor Tolkien (Corey Olsen, a professor of English at Washington College). It turns out he teaches a course each year on Tolkien, and more specifically he does a seminar on THE SILMARILLION. And what’s better? The whole thing is podcasted and available free on iTunes! So each episode consists of discussion between him and his students as they go through the book a chapter at a time. The poster at OneRing.net was able to get through the book this way…and if he can do it…so can I.

So I finally went to the store and bought a copy of the book. I didn’t know whether it was better to attempt to listen to episode 1 before I’d read the first section or after. Well, thankfully one of the initial things mentioned is how it helps a HUGE amount to read a 1951 letter J.R.R. Tolkien wrote to Milton Waldman (publisher) in which he basically outlines the entirety of the book. It’s a long letter, but this made me stop the podcast, and open the book (and lo and behold the first thing in it after the forward is that very letter). I read the letter, and then without help started the first bit called Ainulindulë. I concentrated hard to keep track of what was going on and interpret it best I could. Afterwards (this morning) I listened to the first episode of the podcast and 1hr and 30min later I was SO much wiser about what I had read. Some of the questions his students asked were the ones I had as well, and others I hadn’t even thought of. Olsen is VERY informed about the book and makes it easy to come to grips with what exactly Tolkien set out to do while also providing insight to the man himself.

This series of podcasts has taken a daunting read (that most of my friends tried and gave up on) and made of it a fun, informative, and ultimately fascinating book. I’m already excited to see how things go and I’m only just past the creation of the universe bit. I realized that Tolkien meant to make it hard. He didn’t mean for it to be easy to grasp. As with all Earth culture’s myths and legends, they are normally set down so early in history that they are complex, convoluted and difficult to grasp. With a little help and some work you can get it. I think that was intentional, and I can’t fault him for it.

So this post is to let you know that as I move forward with this project I will be chiming in only after each volume is consumed (AKA I won’t be talking about this again till after I finish THE SILMARILLION, and then after the next book in the histories and so on and so forth). You are welcome to attempt to read along with me as I go.

One thing I cannot stress enough is just how helpful Professor Tolkien’s (Corey Olsen) course and podcast are. If you want to try this book, you could do much worse than taking your time and making sure you get the most out of the volume.
Posted by GunMetalBlue at 8:15 AM