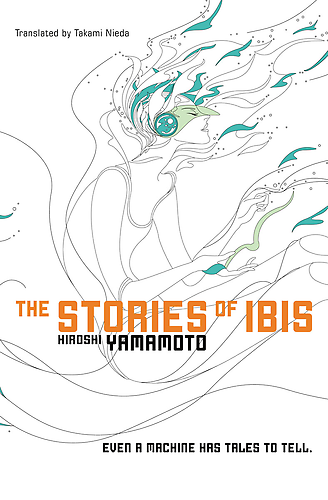 In a world where humans are a minority and androids have created their own civilization, a wandering storyteller meets the beautiful android Ibis. She tells him seven stories of human/android interaction in order to reveal the secret behind humanity's fall. The stories that Ibis speaks of are the "seven novels" about the events surrounding the announcements of the development of artificial intelligence (AI) in the 20th and 21st centuries. At a glance, these stories do not appear to have any sort of connection, but what is the true meaning behind them? What are Ibis's real intentions?


A while back I read and reviewed Daniel H. Wilson’s ROBOPOCALYPSE. I enjoyed it. I enjoyed it a lot in fact. I love the idea of a future earth that includes robots, androids, or simply some form of sentient / self-aware Artificial Intelligence (AI). It makes for compelling storytelling, and usually gives you a reason to root for the humans while still seeing the machines plight as servants of various descriptions.

In THE STORIES OF IBIS, Japanese author Hiroshi Yamamoto has written one of the most stunningly thought-provoking and honest novels in the above genre. Better than that he has written one of the finest novels I think I can recall reading. And what’s the best thing about it? It’s wholly unique. It approaches each story from a slightly different angle, and most certainly from angles you have not thought of. The result is an anthology of seemingly disparate fictional tales about humans interacting with AI, which actually end up related to one another, but not at all in the way you might think. The stories would each be amazing on their own(and I actually believe that five of the seven tales related to our narrator by Ibis were originally printed in other publications), but together they weave an intricate tapestry, and aligned with the last two stories (made specifically for this novel) and the “intermissions” which break up the stories and showcase the two protagonists as the stories are told, the result is nothing short of breathtaking.

I don’t want to dig too deeply into the actual plot of the various stories, but you should be aware that they are all totally relevant, clever, and fast paced. The novel is roughly 400 pages long, but it never feels long since the stories click along at such a streamlined speed. The first few tales are shortish (somewhere in the range of 20 to 30 pages), but as we get deeper in they get longer culminating in the last two tales the penultimate of which was pleasantly longer and deceptively emotional, not to mention profound. This is a book that will keep you sitting and thinking about its ideas, plot progressions and characters long after you close the book. It was so engrossing on that level that I was briefly quite tempted to start at page one again and read it through one more time, for fear I might have missed some moment of revelation or insight.

Both the human narrator (unnamed), and the android Ibis (who tells her stories to our narrator) only have seven “intermissions” (including the opening prologue) with which to endear themselves to the reader and surprisingly enough they quite pull that off. Whether that is because of the stories themselves and each character’s reactions to them, or simply because they were well drawn by Yamamoto in the first place I don’t know. All I know is I cared about both the Narrator and Ibis by the end, and that stands out to me.

I don’t really want to pick favourites, since the book and stories all work best as a unit and when compiled make the ending as poignant as it is because of that fact…but the 6th tale, THE DAY SHION CAME, left me completely astonished, and emotionally drained. It is probably the most affecting story in the book and may very well be one of the best short pieces of sci-fi fiction I’ve ever read. It is both completely “human” and totally “android” in its execution and very nearly reduced me to tears. And all that while being almost deceptively simple.

Here is a book that COULD very well have fallen into the trap of techno-babble or being too obtuse for its own good and it never does. Yamamoto never sacrifices his story in order to be overly clever in what he’s putting across. Whenever things are explained or notions are fielded it is done so in a way that makes it easy to understand. Various terms, plot points, and even characters are approached as “known” initially, but are explained quite soon after being introduced allowing your brain to relax while the work is done for you. Basically I never found myself stumbling blindly along attempting to sort out what was going on.

Yamamoto is another author who has created a fan in me with one book. I would place THE STORIES OF IBIS in my top FIVE (you read that right) science fiction books of all time. That might sound lofty, but I simply can’t tell you enough how this book affected me, my preconceived notions about AI, and mostly about humanity. There are revelations within these pages for the reader that will astound simply by virtue of being honest. How often do we look at ourselves in an honest light? We like to see ourselves a certain way and this book may have actually changed that for me. For that I think I might always be thankful to Yamamoto.

This is definitely one of the very BEST sci-fi novels dealing with earth’s future. It’s certainly the BEST of the humans interacting with AI that I’ve read. The prose (translated from the original Japanese perfectly by Takami Naeda) is fluid and poetic without being too flowery, the pace is fast and clean, and the story is a hauntingly beautiful look at the history of science and the possibilities of the future. Hiroshi Yamamoto would be in good company alongside some of Sci-Fi royalty like Asimov and Clarke, but he would be just as at home next to his contemporaries like Reynolds, Brin or Banks. Funnily enough it was as I was walking out of the bookstore (after a daily perusal) that out of the corner of my eye I saw the spine of this book with its sketch-like design on pure white with bright orange block letters for the title. It stood out to me and so I picked it up an read the back. I bought it mere mintues later. Strange how life does that for you some days.
Posted by GunMetalBlue at 6:54 AM