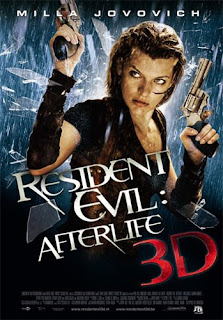 AFTERLIFE reminds me why I’m unlikely to ever be a convert to the 3D phenomenon.

All it lacks is the actors flapping their fingers at the screen periodically and yelling 'booga booga'.

If you’ve seen one entry in the RESIDENT EVIL series you’ve seen them all. Literally, there is no other reason to watch. But I have to appreciate the actors’ commitment to throwing themselves into a never ending series of absolutely impossible setups without ever breaking character and laughing themselves silly.

Also, I admire how the writers intentionally write themselves into impossible corners, dreaming up the craziest scenarios possible, and then conjure equally batshit insane ways to get out of them. AFTERLIFE introduces and discards more interesting setups and ideas in its first ten minutes then some films will have throughout their entire runtime.

RESIDENT EVIL movies are fun, providing you like shooty-shooty, splodey-splodey, good is strictly an afterthought.