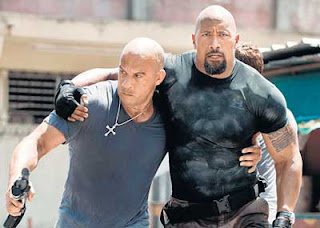 Got a major Hollywood tentpole franchise in a death spiral of diminishing returns?

Just add a liberal dose of The Rock!

Instead it decides to drop all three in a blender, add a healthy dose of simmering sexual tension and serve it up to teenagers and 20-somethings everywhere.

The film doesn’t bother with those trivial nuisances like plot or character growth. At least three cops in the film give up their careers to go rogue for a life of crime because it’s the 'right thing to do' and ‘I was really angry at the bad guys’.

There's a back and forth showdown of sorts between Vin Diesel and series newcomer The Rock. Sort of a Highlander-style meeting of the action star minds or the basis of an ongoing fan-fic franchise. The mutual fighting style of Diesel and Johnson can best be summed up as hugging each other tightly, rolling around and a lot of grunting.