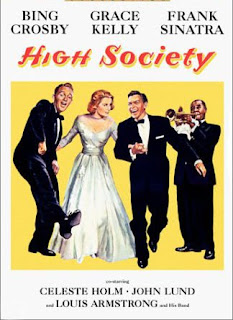 Despite claiming to be a remake of the snappy PHILADELPHIA STORY it comes across as a bloated big studio version of a movie that defined itself by its breakneck pace and witty banter.

What is it about the presence of Der Bingle that turns everything he touches into a laid back Sunday afternoon slow jam a la WHITE CHRISTMAS? Croon is musical style, not a lifestyle choice.

The musical numbers are moderately catchy at best, but mostly feel like chores to struggle through before we get back to the aforementioned 'crackling dialogue'.

It’s good enough for what it is, but I definitely prefer the original version.

It’s nice to see Grace Kelly on screen though, no matter what the vehicle. And Louis Armstrong is criminally underused, reduced to cackling cryptically in the shadows.