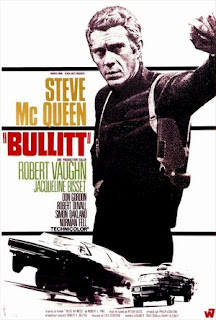 I first sat down to watch this something like 13 years ago after I was accepted to film school and I thought the damn thing was so boring I fast forwarded through the bulk of it.

I always felt I owed it a rewatch.

It’s definitely a bit of an anachronism as a film though. McQueen is playing a gritty, rogue cop before gritty rogue cops were two dimensional clichés.

This was a rough and tumble cop film that defined its grittiness through the excessive usage of a jazz flute, so, you know, context.

Bullit brandishes a gun only once. He's in a stable relationship. And rather than bust his balls with screaming tirades his captain quietly backs him up behind the scenes.

Made three years before DIRTY HARRY, and isn't it ironic that both characters are based out of San Francisco, this is what Harry would be like if his Mom hugged him once or twice as a child.

Also, every time I see Robert Vaughn I just write him off as the villain, even if he isn’t.