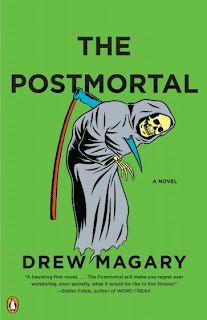 The cure for aging was supposed to bring health and prosperity to the world. After all, think of what you could accomplish if your lifespan was near-infinite.

But it doesn’t quite work out that way. Rather the discovery of the cure marks the beginning of a massive social, economic and political transformation, whose consequences will play out over generations.

John Farrell was one of the first people to take the cure. Farrell manages to use his business connections to get in on the ground floor when the cure was still illegal. But overnight the plans for the rest of his life are thrown into disarray. After all, who in their right mind would want to be a real estate lawyer forever?

Set amidst the massive upheaval in a time where death has become an outdated concept Farrell struggles to give his life meaning and purpose in an increasingly chaotic world.

THE POSTMORTAL by Drew Magary is 384 pages of mind blowing insight into a world that is slowly choking to death on its greatest wish. It’s like a post-apocalyptic future where none of the main characters are aware that Armageddon has actually taken place.

Magary has crafted a measured and considered examination of Earth’s slow, downward spiral towards its inevitable demise. With an infinitely prolonged lifespan the social mores that once kept the social order stable no longer apply. Life, death, family, marriage, core precepts reinforcing our cultural and social identity, are torn down and the interpersonal bonds that reinforce and inform our humanity are irreversibly mutated.

POSTMORTAL is clearly an allegory, dialed up to 11, for the many budding social concerns that grip us today. Magary throws out a hodge-podge of brainy social issues for readers to noodle over, from resource depletion to overpopulation and the reckless implementation of scientific discoveries. Thankfully he manages to do so, in a fairly natural way, without beating the reader over the head with a rubber hose whilst proclaiming “and now we’re going to discuss the threat of planetary disease vectors”. There’s no preachy social commentary being shoved down anyone’s throat, just an interested observer peeking behind the curtain.

I can’t emphasize enough how much I was impressed by Magary’s delivery of these concepts. As the story progresses, what would be shocking and radical to us in 2012 is obviously blasé and every day to Farrell. But rather than hold our hand and lead us from Point A to Point B through humankind’s social and technological development, Magary gives us just enough information to draw our own conclusions. It takes a lot of faith to trust the reader to get there on their own and I imagine that the temptation to spell things out must be a powerful one. But I’m glad Magary resisted temptation as the book feels more natural as a result. (As natural as a post-apocalyptic future where people don’t age can feel of course.)

So many of these big ideas are casually tossed out and left for the reader to mull over. Even after I put the book down at night my brain would constantly be churning and turning, trying to get a handle on what I was processing.

But it’s the book’s smaller, more personal moments that I found truly moving, the baby who’s development is forever frozen, cured of aging by the sick love of an addled mother, the seemingly solid relationship that begins to fray and fall part because the couple can’t bear the thought of staying with each other forever or the last goodbye from a dying sister.

It’s these little details, where the author reveals how much thought he’s put into fleshing out the implications of the ‘cure’, that separates POSTMORTAL from the herd.

POSTMORTAL is written in a diary format, which is a structure that allows for a lot of character introspection but generally not so hot at giving readers a glimpse of the larger narrative. Too often I’ve seen writers twist their story into a pretzel with artificial info dumps in order to explain the narrative developments to the reader. Magary neatly avoids these traps by making the diary more of a blog, incorporating snippets of interviews or a friend’s social media feed, a la Twitter or Tumblr. It’s a clever work around, giving the reader a sense of the larger world without talking down to them in the process.

The ending is POSTMORTAL’s weakest link. The reader is asked to accept the likelihood of a lot of unlikely coincidences in order to help the story move forward. This includes a chance meeting between two characters who haven’t seen each other in over sixty years. It’s a bit of a stretch, but thankfully the powerful emotional resonance that Magary has built up throughout the book helps carry skeptical readers over the implausibility gap. It took me a ridiculously long time to digest the last 20 pages or so because the book’s climax was just that powerful and I kept slowing down and rereading it in order to savour that goodness.

THE POSTMORTAL was a phenomenal read. From page one to when I reluctantly put it aside I was hooked. There’s so much at play here, the stakes are so high and the characters so remarkably crafted that it’s impossible to read this book just once and think you’ve got a handle on it all. Every time you peel a layer of the story back there’s another underneath, waiting to challenge you.
Posted by Chris at 10:39 AM