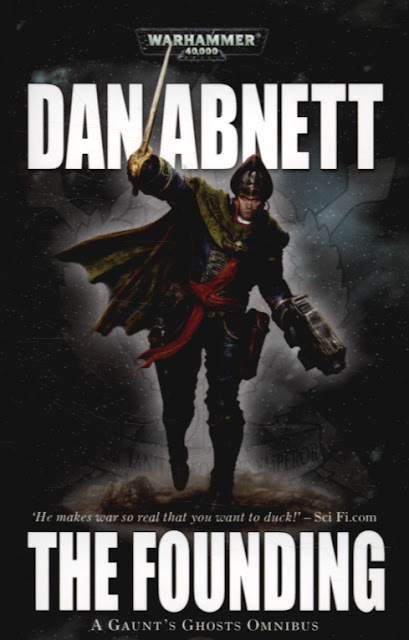 This omnibus edition of the first three Gaunt's Ghosts novels follows the story of the Tanith First-and-Only regiment (nicknamed the Ghosts) and their charismatic commissar, Ibram Gaunt. As they travel from warzone to warzone in the Chaos-infested Sabbat Worlds system, the Ghosts must not only carry out the most dangerous of missions but also survive the deady politics of the Imperial Guard.
FIRST AND ONLY

There is just something about glory.

There’s something even better about glory that is achieved against all odds, by a force that shouldn’t, by any rationale, be able to win. Books that showcase bravery, selflessness, and honour always just make me want to cheer. I mention this so you have a little bit of insight into my mindset as I went into reading this book.

Review Note: This is a review of the first “book” within an omnibus that contains 3 such “books”. I felt it only fair to the author (and myself) that I review his books as they were published, and so this review concerns the first section of THE FOUNDING (A Gaunt’s Ghost’s Omnibus) called FIRST AND ONLY written by British author Dan Abnett. I will be reviewing the other two “books” as I finish them, so consider this Part 1 or a 3-Part review.

This is my first foray into a monstrous collection of books (based on tabletop games) known as WARHAMMER 40,000, published by Black Library. Over the last ten years or so, from various selections of friends and acquaintances, I have heard very good things about the Black Library books. I have also heard that they are a bit of a fandom addiction. I was told that if I started reading them, I’d be in for a penny in for a pound. I’m both freaked out and totally stoked that they were right in those comments.

It is the 41st millennium and an immortal emperor sits a golden throne on earth and has ruled for a thousand years. Across the galaxy his immense armies conquer, and lead a crusade against the evil forces of Chaos. In the Sabbat system are countless worlds that must be put down and their terrors contained. This is the story of a regiment of Imperial Guardsmen known as the Tanith First-and-Only (nicknamed the Ghosts). Survivors of a now dead world, and lead by the dauntless Colonel-Commissar Ibram Gaunt, they must fight on various battlefronts as scouts and are usually the first into combat. All are represented with unique personalities and foibles, and they must not only come to terms with their own lost planet and lives, but with a commander they aren’t too sure of, as well as having to fight alongside soldiers they might be even less sure of.

The narrative picks up right in the heat of battle on a warfront on Fortis Minor, and the Ghosts are in the thick of it. The action sequences start right from the get go and are pretty relentlessly paced and all of the sudden I found myself at page 60 without realizing it. Woven throughout this first view of a Ghost engagement is a back story that hops around in Ibram Gaunt’s past explaining amongst other things, where he was trained, by whom, and how he became commissar. The politicking that is happening behind the scenes is thrown right up on screen almost immediately, and lets you know that this book isn’t just a one-trick-war-novel-pony, but is rather more deftly layered than at that first glance. There are factions from Gaunt’s past and the Ghost’s present that wish to see them fail, and moreover might be after something much, much larger as a prize. Everyone has to be on their toes and dance around not only enemy traps, but ones set by supposed allies.

What is front and center to me immediately is how insanely large this universe is. Whether that is because so much had been set out by Games Workshop’s table top game ahead of time or not is unclear. What is clear is that Abnett fell right into a sweet groove of storytelling that acknowledges W40K aspects and tropes, while telling a singular Ghost-centric story. An achievement definitely. As a new-to-this-universe reader I found it remarkably easy to discern the various standards within the W40K world. Adeptus Astartes (Space Marines, those guys with the big eff off armor and guns), Adeptus Mechanicus (technologically knowledgeable group), chainswords, bolt guns, lasguns, vox-casters, Astronomicon’s (space navigators), and even the daemon-infested warp itself (the only way to travel between worlds), I had no trouble understanding any of that. Abnett clearly lays everything out and that made my almost immediate immersion all the more eased.

The scope of the armies is vast and we see various groups represented here: The Ghosts are joined by the likes of other major Imperial forces like The Jantine Patricians, and The Vitrian Dragoons all of whom have their own motto's, uniforms, codes of honour and even battle tactics. Their position in such a huge universe shows them as important, but by no means are you led to believe that they are all there is. You get inklings and mentions of a LOT of other fleets, guardsmen, forces, companies ect. As the story progresses you can simply FEEL how large an empire we are talking about here, and it's never more easy to spot than when you find yourself aboard a monstrous starship that is kilometers long and looks like a monolithic sideways cathedral.

There is SO much to talk about here. I want to go into things like some of the Ghost's mistrust of Gaunt, or flat out dislike of him. I want to go into his relationships within the narrative and how they came to be, but to do so would deprive you folks of reading it yourselves, so I won't go into it.

The writing is really quite decent. I found a few passages were a tad clunky, but my overall impression was that those could be overlooked quite easily and since the story is so ultimately compelling you won’t find anywhere to breathe and notice. Once I picked this book up I could NOT put it down. In fact it was fairly hard to stop after the first “book” as the drive to want to go onto GHOSTMAKER (second “book) is hard to resist.  The pace is ridiculous, and whenever I found myself having to stop reading it, was always one of those “I’ll just read one more chapter” situations that ends with you up at 2AM with zero sleep. Not that I am complaining.

Abnett has created a very human, but incredibly unique entry into the W40K world here. I knew nothing about the 41st millennium before I started and now after only 240-pages I find myself having been given a little knowledge of said universe...and of course now I want to know EVERYTHING about it! That is a daunting task simply because of the sheer volume of books out there to read in the Black Library.

At any rate, consider me a fan of W40K now, and consider me an even bigger fan of Dan Abnett. He can write an action scene with just as much aplomb as he can a quieter dramatic scene. In fact, FIRST AND ONLY ends with a quiet, but incredibly insightful scene from Gaunt’s past that had me grinning from ear to ear. Absolutely fantastic!

If you have yet to take the plunge into the W40K book series, this is an amazing starting point. It contains everything you need in a beginner book and you’d be hard pressed to find a more action-packed, rip-roaring yarn of the far-flung future.

Posted by GunMetalBlue at 11:51 AM