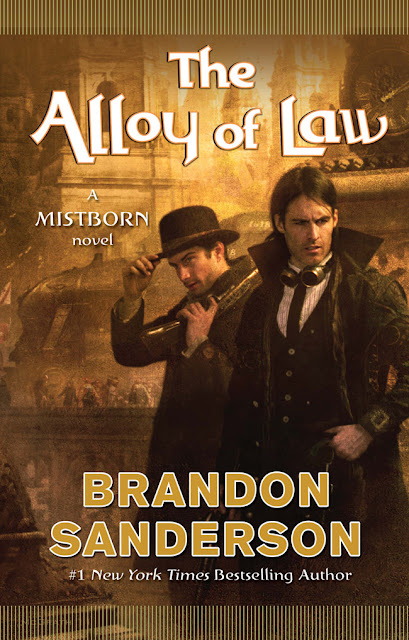 Probably one of the books I was most looking forward to reading this year was Brandon Sanderson’s new steampunky Mistborn novel ALLOY OF LAW. Well it came out last week and like you might expect I got right down to devouring it.

Let’s get the easy stuff out of the way first. Is it good? You’re damn right it is. If you liked his previous Mistborn novels at all, then you are in for a treat here as well. Both Allomancy and Feruchemy are evenly used within the pages and add the aspect of guns and iron and girder 1800’s style city and you have the makings of a blast of a good time. Are there some flaws? Yes, albeit very minor stuff that didn’t bother me too much.

Basically this is the story of Waxillum Ladrian (descendant of Breeze’s house from the original series) and it takes place 300 years after the end of HERO OF AGES. The heroes from those books have passed into legend and even days of the week are named for them (Vinuarch), or cities (Elendel). The society is again split into nobles and not-so-nobles, and various religious sects based around the events in the first trilogy. Wax, after having been unable to prevent a death early on in the book, ends up leaving his home and job as a Lawman in the Roughs (wild west-ish style setting on the outskirts of civilization) to come to the huge prospering city of Elendel . The city is coated in railways and large buildings, lavish estates and caters to any city-dweller’s need. Wax is meant to try to bring the bootstraps up of his House, that his Uncle left in shambles and poor, by marrying into a richer family and giving up life as a Lawman. Everything seems to be going according to plan until Wax’s old friend Wayne shows up from the Roughs, the woman he is meant to marry is too serious, there is a spat of robberies by a group of people known as the Vanishers, and someone is trying their damndest to kill Wax. Thus begins the rollicking good time that is ALLOY OF LAW.

For those who love Sanderson’s magic systems, and especially alomancy, shouldn’t be disappointed as not only does he give us allomantic gunfights, but he adds an ability here and there that is new. Wayne, for example, is able to make time bubbles in which he and Wax can have private conversations, or allow them time to organize themselves. It’s really nice that Sanderson found a way to add some new stuff to classic alomancy and I will say that Wayne’s ability especially made for some breathtaking moments during action sequences.

Wax as a main character is very well laid out, in a way I wasn’t expecting. He’s roguish and his metal vials are filled with whiskey or some other alcohol. That made me chuckles, because I mean how else would a cowboy lawman ingest his metals? Whisky! He does a good job at playing the line between Rough’s guy and noble without sacrificing who he is in the process. He’s also incredibly honest with himself about just what is going on in his life. Wayne is probably my favourite character. Always ready with a hilarious quip or comeback. The cockney-accented deputy is a barrel of fun all the way through, is on the ball in every situation, and is even a master of disguise. A great addition to the story and a perfect foil for Wax’s more serious nature.  A true duo in every sense of the word.

The love story is very interesting, and while I’d rather not give anything away I want to congratulate Brandon for not shying away from doing something that makes sense. The complexity of Wax’s character comes to the forefront for the love story and went in a few directions I wholly wasn’t expecting and that made it utterly fresh and engaging.

Now, what would a Sanderson story be without twists and revelations. Are there any? Yes indeed, some doozy’s. Am I going to tell you anything about them? No way! As Sanderson is wont to say you need to RAFO (ReadAndFindOut) that.

There is a very minimal expositionary bit in the middle that slowed the pace down a tad, but it really is not that long and is worth getting through. There are some repeated phrases or words that end up in the overused territory, and a few bits that seemed superfluous to the overall story, but in the end my complaints are VERY minor and truly didn’t affect my reading experience much at all.

If you want to see how Brandon’s Mistborn world has grown in 300 years, then you really need to get this book, as it is pretty much an absolute treat from beginning to end, and it will certainly leave you wanting more. It’s quite nice to have read the previous trilogy and have that base to work off of while the world grows up around you. It will be awesome as time moves forward even further in the two future trilogies (one in urban modern time, and one in the future) and how technological growth will affect the planet of Scadrial, and then to go one further and see how that affects the overall cosmere that Brandon has created. I’d be lying though if I didn’t want at least one more book starring Wax and Wayne, as they are a stellar duo that are a joy to read.

Go out and get this book. You know you want to, and you won’t be let down by it. I'd also like to point out how hardworking Brandon is. The man is a machine. He is currently finishing the WOT series, he wrote his first in the ten book Stormlight series, and found time to write this book as well. And the best thing is the consistency in his writing. I can't say I have ever not enjoyed anything he has written. He is easily one of my favourite authors.
Posted by GunMetalBlue at 8:52 AM