TV Review: Doctor Who - The Wedding Of River Song (Spoilerific) 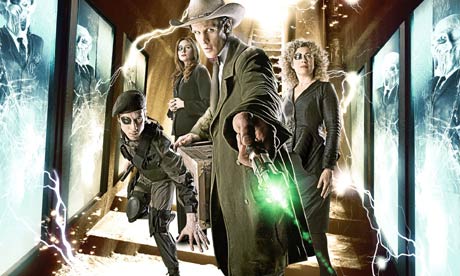 And so closes one of the more turbulent (for me anyways) Series of DOCTOR WHO.

Most of my reviews are non-spoilerirific, but all bets are off now at the end of the season. If you haven’t watched it (the last episode) yet I assume you aren’t going to be trawling the internet for reviews before watching, and if you have watched then you’ll not care about spoilers.

So be aware: SPOILERS WILL ABOUND below for the whole episode including the ending.

Last night’s episode THE WEDDING OF RIVER SONG was the end of a season scattered with a few good episodes, and more than a few lacklustre ones. I’m going to start this review properly by mentioning a Series 1 episode called FATHER’S DAY. In that one, the 9th Doctor and Rose Tyler travel back in time to 1987 so that Rose (who doesn’t really remember her father Pete) can be there on the day he is hit by a car and dies. After a few tries at just watching Rose interferes and saves Pete, and time goes completely wonky because of it. These flying gargoyle creatures appear and start killing people, trapping everyone in a church because time is not right and they intend to set it right. The poignancy of that episode was in the fact that Pete’s death was required for the timeline to continue as it was, and eventually, begrudgingly Rose has to just let her father die. It was emotional and it perfectly exemplified the fact that although the Doctor travels through space and time and saves people, certain things “must always be”. This was further illustrated in the end of the 10th Doctor episode THE WATERS OF MARS when the Doctor took a fixed moment and tried to save the people involved who were supposed to die attempting to become a Time Lord Victorious. It only took a moment for a secondary character to show him how wrong he was there. These are just a few of the reasons that Russel T. Davies era of Doctor Who was so different from Steven Moffat’s (writer of last night’s episode and current showrunner) era. Those difference are even more obvious in the last episode of the 6th Series.

In THE WEDDING OF RIVER SONG we are brought back to the notion that The Doctor must die in 2011, at 5:02 PM at Lake Silencio in Utah. We are already aware that it is River Song who kills him, and that The Silence and Madame Kovarian have raised River Song (a "child of the TARDIS" who has some time lord powers like regeneration) solely for this purpose. We know it’s a double shot and that mid regeneration the Doctor is irreversibly killed. So as the episode begins the Doctor is going about attempting to find out WHY he has to die and learns through various sources that it is because at some point in the future someone will ask a question that will have to be answered, the result of which shall be horrible enough for a religious order (The Silence) to have been formed to kill the Doctor to prevent it.

So at the beginning of the episode “all of time is happening at once”. I don’t even want to think too hard about how if that were actually the case it would be far different from how it was shown. At BEST time is wonky with a few things overlapping...but no, time is not happening all at once. Time is also (supposedly) “frozen”. No, I am afraid not...people are moving about living their days and having conversations...the clocks have stopped...but “time” itself is actually fine. At any rate, we quickly discover that in this alt-time stream/bubble where Winston Churchill is Emperor of the Holy Roman Empire, balloons fly cars about and there is a tram train that runs into places like a re-purposed pyramid at Giza as America’s Area 51 (I don’t even want to get into the myriad of things wrong with that), the 100 Years War is still happening and Dickens is writing this years go-to Christmas special, that River has in fact caused it all. On that Beach in Utah we find out that River can’t control the suit and it will kill the Doctor anyways without her help and he says he understands and it’s okay and he forgives her utterly. She then somehow DOES control the suit and shoots (I guess into the ground) and wastes all the ammo thus creating the “frozen time/alt-time/bubble/stream” where the Doctor doesn’t die like he is supposed to. So we have a whole time stream where Amy and Rory and company don’t really remember one another, but still kind of do as well, and are in cahoots with River attempting to signal the "outside-the-bubble-universe" to get help for the Doctor and prove he’s not as bad as he is good, and thus should live.

So this is why I mentioned FATHER’S DAY. In that episode the gargoyles attempting to kill Pete (and others) to set time right made perfect sense and having Rose have to let go (but still getting to say goodbye) was fitting and showed us that sometimes things HAVE to happen a certain way for time to exist properly. Here we have a similar idea where the Doctor must die, as we’ve been told all season so far time and again. In fact I don't think I can count how many episodes ended with him looking at a picture of himself and his death date. The problem is that when the Doctor figures out his loophole (using a Tessalector body to fake the death at Lake Silencio), my biggest question then becomes how is it that he is able to “fool time” with the robot body? Wouldn't it have made more sense to have had him using a Flesh TM body and controlling it from afar? Beyond that, how does letting the robot body die set things straight at all? Or is it that he was always meant to simply sacrifice a robot body there all along and that was the SET POINT that couldn’t be changed, and not his own death?

I think that gets us to the meat of what is wrong with this whole episode (and to a certain extent Series 6 as a whole). If you think even remotely hard about any of the "science" or "reality" or "truths" in the episode everything falls apart like a house of cards. Take for example River basically saying that she WOULD sacrifice the whole universe, the explosion of the TARDIS from Series 5, and the deaths of billions...for her love of the Doctor. This is the POLAR OPPOSITE of what he has always stood for. Though he sets things right by going off to “die”, should he still be okay with River being that way? Is that why she’s left to be mostly in the stormcage prison facility for the rest of her life by him (instead of him saying that he wasn’t really dead at her trial)? He still goes to take her on adventures though. I guess it kind of goes against the Doctor as a character for me that he allowed that sort of behavior to stand. While we are on the subject of the ending, why DID he have to marry her? We find out it wasn’t actually so he could tell her his name, so was it instead all part of the ruse to fool Amy and Rory (who River tells the truth to later anyways)? Then I would also add why was River needed in the suit at all if the suit could act on its own and shoot the Doctor? Oh, I can answer that one. So that River could be in the suit to stop it shooting him and essentially CREATE this episode. Seriously, think about that a second.

So what did we get in this episode that was worth it? We got many answers, but most of them we had already guessed. Still it was nice to have finality to our guessed answers. The Doctor avoided his death by Tessalector copy, but my issue with that (other than my above mentioning of fooling “time”) is the fact that they showed it at all before they needed to. If you think about it they never needed to show the Tessalector early on at all. We all saw LET’S KILL HITLER. We know the capabilities of the ship/human copy robot. Why on earth would you give us that hint so early on. What a revelation it would have been had we found that out AS the Doctor asked River look in his eye! A slightly obvious escape would have been made better by surprise. Instead, the minute the Tessalector showed up I knew that was his avenue to not dying, and it showed up before the opening credits! Still, it was AN answer, so I'm not complaining too much. What I can only be somewhat sure was meant to be a cliffhanger is the "question" from the future that should never be answered was "Doctor Who?" Cute. If a total, blatant red herring. If I thought for one second that they were going to answer the "who?" question as they have teased then I'd be intrigued, but they won't, so I'm not. It's one of the enduring mysteries of the show that ought never to be answered, and they are aware of that so I'm sure it's simply another reason to throw a time point into the Doctor's future for Series 7 action to be based around, and quite honestly I found it a little cheap.

There was some great stuff in the episode though. The effects were amazing throughout and I’m convinced that this is why we had a number of budget eps this Series. They were saving it up for the effects in this one. The acting was good and Matt Smith especially delivers a nice performance, as does Rory. The tribute to the death of Nicholas Courtney (Brigadier Lethbridge-Stewart) was fitting, poignant and the Doctor was brought down to earth with an emotional thump by that. What a way to acknowledge Courtney’s work on the show. I actually wonder if after they screen all the Series 5 SARAH JANE episodes that were made prior to her death, if we will see a similar acknowledgement of Elizabeth Sladen (Sarah Jane Smith). That would be wonderful as a tribute to see as well.

Overall this episode was decent, but not mind-blowing.  Last years’ finale was much better in my opinion, and this will forever go down as my least favourite Series of DOCTOR WHO, but I can’t say it was all bad. There were a number of decent episodes and THE WEDDING OF RIVER SONG is definitely included in those...but you have to not think too hard about it as a story otherwise it  crumbles completely to pieces.

Posted by GunMetalBlue at 8:19 AM

Email ThisBlogThis!Share to TwitterShare to FacebookShare to Pinterest
Labels: Doctor Who, Review, Series 6, Steven Moffat, the wedding of river song