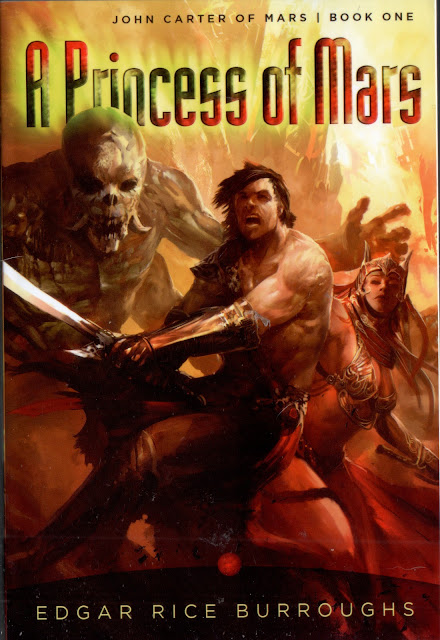 A futuristic sci-fi fantasy romance, A Princess of Mars tells the story of John Carter, a Civil War veteran who inexplicably finds himself held prisoner on the planet Mars by the Green Men of Thark. Together with Dejah Thoris, the princess of another clan on Mars, the unlikely pair must fight for their freedom and save the entire planet from destruction as the life-sustaining Atmosphere Factory slowly grinds to a halt.

Upon finishing my re-read of the first of Edgar Rice Burrough’s Barsoom books, A PRINCESS OF MARS, I am met with the revelation that the cliffhanger at the end of the book is kind of a doozy. Kind of a huge doozy in fact.  Especially when you consider that the original magazine serial of the book ran in 1912 (February to June I think in 4 or 5 parts) and then had to wait for almost a year to continue the story. The books themselves wouldn’t be published till later that decade. I think it is Burrough’s skill at weaving a fascinating tale with a few twists and turns I wasn’t expecting that make reading the books such a treat.

Definitely deserving of the moniker “classics”. Written 100 years ago, and yet still quite compelling today. The first time I read the prologue I was a bit blown away the twist even that far into the story, and I wasn’t disappointed by any part of the narrative.

One of the first things I noticed is that in a few instances Burrough’s wisely eschews taking too much interest in the “action moments” in favor of moving the story along and the telling of it as a whole. If John Carter, who’s earthly powers on Mars make him superhuman, takes down a huge 15-foot Green Martian warrior with a punch that leaves them dead from the blow, it is handled in a sentence or two. So a number of action fights are down to a few sentences simply because John Carter’s skills are such that he really is a superhero on Barsoom (Mars) and it wouldn’t take much to punch a guy into the floor. In the later books in fact Burrough’s shows that it takes much more to subdue Carter, and that while he’s not infallible, he is certainly a force with which to be reckoned.

The other characters that surround John Carter, Dejah Thoris, Tars Tarkas, Sola and even Kantos Kan are so well fleshed out over the course of only 202 pages that I can’t help but to have fallen for each of their stories separately. Whereas you might have assumed that Carter would be the star and that since this is rather pulpy science fiction/fantasy the other characters wouldn’t matter nearly as much, Burrough’s shows us that they do. In fact, as is the case with Dejah Thoris (Red Martian princess and love interest), and Tars Tarkas (Green Martian warrior Thark), the supporting characters come across as just as compelling as Carter, if not moreso. I found myself as I neared the end of the book finding Tars’ story to be one not only of a great warrior, but also of an honorable person who finds himself becoming something new due to our protagonist’s involvement in his affairs. That was very interesting to watch.

With nods to both fantasy and science fiction, A PRINCESS OF MARS is a wonderfully realized tale of alien worlds and societies, swashbuckling derring-do, captive princesses, great cities, airships, air factories and even a few devoted pets and animals. I think I messaged Chris the other morning on the way to work as I was finishing the re-read and I likened it to “reading a warm cup of hot chocolate”, and that’s entirely true. These are books that sit proudly on my shelf and whenever I feel so inclined I pick them up. Yes, I know the story and yes I know the ending, but they are written in such a way that I discover something else every time I read them and they even serve to cheer me up when I am down.

Naturally as I finished I HAD to go on to the second book THE GODS OF MARS, which I am currently enjoying a second time.

I should point out my re-reads came from purchasing the books in brand new soft cover trade formats with lovely new cover art from Fall River Books (an imprint of Sterling) by artist Kekai Kotaki. I also found out after a little investigation that not only will Fall River be releasing the rest of the Barsoom books in the format with new covers, but also the entirety of the TARZAN series as well. I’ve already ordered a copy of the first TARZAN book TARZAN OF THE APES, a series I’ve never actually read, so I look forward to that.

At any rate, if you’ve not read these books, do yourself a favour and pick up some true classics.
Posted by GunMetalBlue at 10:58 AM