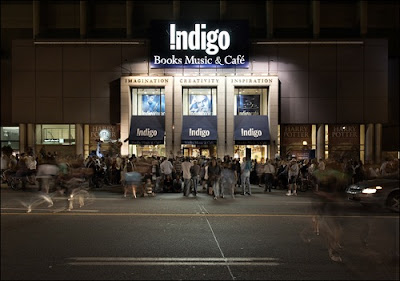 It talks about the efforts of Indigo (Chapters\Coles) to rebrand themselves as more of a lifestyle store, as opposed to a bookstore.

It seems like you can’t go into any big chain store these days without walking into a lifestyle store.

I’m serious, have you been in a Canadian Tire lately? I hear Canadian Tire and I think auto parts and maybe, MAYBE, some construction related tools or something.

I don’t think of living room furniture, snacks and diapers, which seems to be taking up an increasing amount of CT’s floor space.

All ranting aside it doesn’t take a rocket scientist to figure that offering a wider range of goods and services is probably healthier from a business sense over the long run. Specialization is nice, but it doesn’t offer you as much cushioning from the ebb and flow of economic forces.

And besides, out of all the brands I’d like to see reinventing themselves, I think physical media focused outlets are exactly the sort of places that I think need just this kind of rebranding.

HMV and like minded stores were at the far edge of this trend in Canada. With music sales moving primarily to digital downloadery they needed another hook to bring customers into their bricks and mortar storefronts. The solution was to become a sort of music/video game/DVD/t-shirt emporium for all those young turks with cash to blow.

You can argue about the relative success of the venture (not very) but it represented a strong shift away from the core commercial identity.

Now with the growing popularity and affordability of ereaders it looks like book stores are the next outlets to get an extreme makeover. I don’t think there backs are as quite up against the wall the as their music-based cousins yet, but I have no doubt that they can see the change coming nonetheless.

While I bemoan the loss of the traditional bookstore I’d much rather they stick around in this bastardized form then cease to exist at all. Because the end of the bookstore as we know it is coming.

Just last week I stumbled across an Indigo gift card from my last birthday that I had yet to use. A couple years ago this would have been unheard of. Now I download books straight to my iPad and use Amazon to deliver physical copies right to my door. The only time I ever go into a bookstore anymore is if I’m killing time between appointments.

Until I sat down to noodle on this post a bit I wasn’t aware just how much things had changed over the last couple years. Unlike my music and comic purchasing habits, where I made a conscious decision to stop buying physical copies, my book buys are now driven completely out of convenience rather than principle and it all happened without me noticing.

If a hardcore bibliophile like myself feels this way, I can only imagine casual readers have long since realized that bookstores are becoming less and less necessary to the actual act of reading.
Posted by Chris at 8:40 AM

Email ThisBlogThis!Share to TwitterShare to FacebookShare to Pinterest
Labels: digital