Book Review: Doctor Who: Prisoner Of The Daleks - Trevor Baxendale 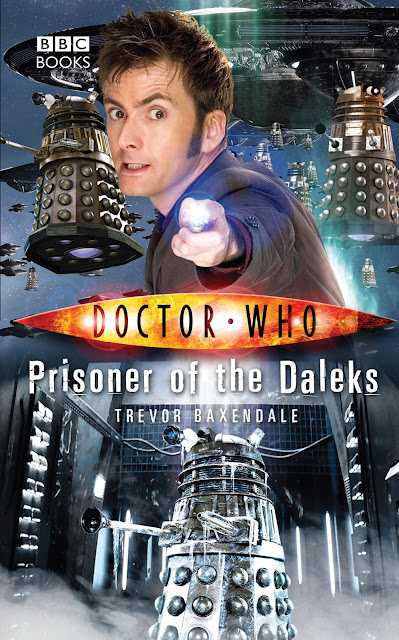 The Daleks are advancing, their empire constantly expanding into Earth's space. The Earth forces are resisting the Daleks in every way they can, but the battles rage on across countless solar systems, and now the future of our galaxy hangs in the balance! The Doctor finds himself stranded on board a starship near the frontline with a group of ruthless bounty hunters. With the Doctor's help, the bounty hunters achieve the ultimate prize: a Dalek prisoner - intact, powerless, and ready for interrogation. But when the Daleks are involved, nothing is what it seems, and no one is safe!

The peripheral media for the DOCTOR WHO canon have never languished under any kind of fan-hatery, like a lot of other media-based-on-television/film does (Star Wars Expanded Universe, Stargate, Buffy). DOCTOR WHO fans are always fairly easy on what they feel will make a good story. In all the BBC books I’ve read in the New Adventures series I don’t think I can ever say I walked away after reading them in a disappointed state. In fact, even the least great of them likely only made me shrug my shoulders and treat it like a lackluster (but still moderately entertaining) episode of the TV show. You never should feel as if you wasted your time though, for the simple fact that the books are never THAT long. In fact they always feel like if you wrote them up into scripts then they would fit perfectly into the 45-ish minutes of a proper episode of DOCTOR WHO on TV.

The books are always pretty fun for me, especially when I am jonesing for something DOCTOR Who-like. You can even go one better and check out one of the audiobook versions that are read by David Tennant himself. It’s great to get a book in audio form when they add special effects sounds, but then to add the actual actor who plays the hero as the narrator, that’s GOLD.

I’m getting off topic here. Usually the BBC New Adventure books have the current Doctor, and his current companion (released to jive with the seasons each was on the show), and this particular one falls timeline-wise into post-JOURNEY’S END (Series 4 finale) but prior to Ten’s regeneration in THE END OF TIME, so the 10th Doctor is travelling alone in this one.

Trevor Baxendale’s PRISONER OF THE DALEKS is probably the BEST (non-companion) book I’ve ever read. Having the Doctor on his own is a touchy idea since we are always so used to seeing him with a well-known companion, but the 2009 Special’s proved that we can not only enjoy those stories of him alone-ish, but that they might end up being incredible (THE WATERS OF MARS). PRISONER OF THE DALEKS is one of those and it has the added interest of featuring the Doctor’s most implacable foe, The Daleks to boot. Terry Nation’s (the man who invented to villain) estate is notoriously careful with what they allow Nation’s creation to be included in, which adds an extra level of weight to the proceedings of the book. In fact I could be wrong but I don't think any other New Series Adventure features them as a villain.

Baxendale’s Doctor is pretty spot on in how he acts and how he speaks, and that’s key when it comes to the peripheral media. If the characters are not true to their TV incarnations then you get a disconnect with the reader. Thankfully Baxendale is aware of that and the translation onto the page is well executed. The secondary characters are decent enough, with Stella, and Bowman being the best among them. There is a tough guy/military muscle type called “Cutting Edge” (no seriously, that’s his name) who comes off a little bit too “Dude” to be entirely realistic, but it doesn’t hamper the story as he fulfills his job within the narrative well enough. The Daleks themselves are (of course) bang on. SEEK, OBEY, ANNIHILATE. YOU ARE AN ENEMY OF THE DALEKS. EXTERMINATE. Ect.. It’s not until later in the narrative that we get a little more insight into the goings on in the hierarchy of the Dalek Empire.

It IS nice to see a human population that is entirely aware of the threat they pose and is at war with them because of it. The Doctor does his level best at balancing between humane (attempting to prevent a captured Dalek’s torture by the human crew), and cold Time Lord (leaving a Dalek to sit in a dark cave for eternity) and of course I love to see that. One of my favourite things that Ten does in the TV show (and he does it here as well) is give everyone a chance to “do the right thing”. Like when he fought the Racknoss Queen in THE RUNAWAY BRIDE and said “I am giving you a chance to stop this right now. Leave this planet and never return.” And when she denies him he simply says “I want you to remember that you made this choice. Whatever happens you brought this on yourself.” I absolutely LOVE that part of the Doctor, it makes him all the more heroic to give even the most vicious enemies a chance at self-redemption. The same Doctor who offered to save evil Davros from his burning ship at the end of the 4th Series. Baxendale’s Doctor is that in spades and it was one of the reasons I enjoyed this book so much.

I actually think this would have made a rather stellar episode of the TV series, and of course as I was reading it I could picture that in my head.

Good stuff and definitely the best New Adventure book in the canon of DOCTOR WHO novels, though I am partial to the ones that feature Ten and Rose (I’m a sucker for that relationship).
Posted by GunMetalBlue at 7:53 AM