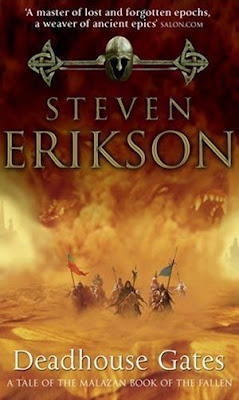 Since this book is nearly ten years old I’m not going to bother with you with a full review of it. Instead I’m going to treat you to some of my rambling thoughts on its goings on.

I actually had to read DEADHOUSE in two separate sittings. It was HARD getting into this thing at first. I had to slog through the opening chapters and very little of what was going on was doing anything to capture my interest. It was only after putting the book down for a month or so to cleanse my palette was I able to summon the necessary drive to power through to the end.

My big beef is that Erikson tends to toss out a lot of information at readers but withholds that all important Rosetta stone that allows us to figure out how it all fits together.

Fortunately (or unfortunately if you’re a frustrated reader like myself) he hasn’t hindered his characters in the same fashion. While I was constantly left flipping back and forth through the book and making periodic stops to Wikipedia, trying to make sense of the ancient cultures, mysterious gods and a plethora of important information that was just being thrown out there with little to no helpful context, the characters in DEADHOUSE seemed to instantly grasp what was happening and how it all fit together.

It was a real momentum killer for me and big reason I had to walk away from the book for awhile.

Good writers have to walk the line between sharing too much or too little. I personally prefer to figure things out for myself rather than being spoon fed expositional plot points. But I think that Erikson’s work would be bolstered by just a smidge more hand holding when it comes to tying together this incredibly deep and complex world.

Erikson also utilizes these strange little scene ellipses that left me scratching my head. Events will happen or characters will make a significant decision at odds with their established motivations and readers are sort of left scrambling to figure out the ‘why’ of it all. Honking huge developments will take place and they’re simply tossed away in two sentence descriptions.*

There’s a lot to like about DEADHOUSE too. Clearly Erickson has spent a LOT of time putting this world together. It’s as rich a fantasy world as I’ve ever seen and I appreciate the time and energy that it takes to put that kind of thing together. It’s obvious there’s a fully functioning world here and that crucial events are transpiring offscreen that effect the characters in DEADHOUSE nonetheless. That’s a difficult trick to pull off. Show, don’t tell is the number one rule for all good fiction. But rules are meant to be broken and when it’s done well (see George RR Martin) then the end result can add a lot of subtlety and nuance to a book. Erikson clearly gets this and the book is stronger for it.

There’s also a lot of good character work in DEADHOUSE. While I may have been clueless about their motivations at times its only because Erikson chose to keep those cards particular cards close to his chest. Again, tipping his hand from time to time and giving me just a little more information would have done a lot to help me follow what was happening. If I had to quibble about his characters is that the bulk of them seem to be variations on the same basic stock type, hearty rugged solider types. There are one or two notable exceptions but I would have liked to have seen Erikson introduce some different characters into the book if only to mix up the flavour of the character interactions somewhat.

After a bit of a rocky start DEADHOUSE finishes strong. When the book is rocking its strengths it’s as good as any other fantasy novel out there. But when it gets bogged down in the weeds it takes a lot of mental fortitude to grind it out through the dull moments. I’m not sure the strong finish balances out the rocky journey it takes to get there, but considering the passion of the Malazan fans out there I know I’m firmly in the minority on this.

*It was a tick that I noticed throughout the book but only really had me shouting “come on” when Pormqual ordered his soldiers to surrender their weapons to the forces of Korbolo Dom. The whole thing was dealt with in less than a paragraph and was clearly just Erickson trying to power through to the end of the book.