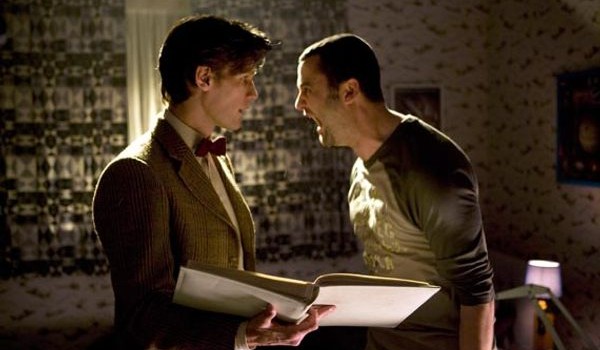 This review should probably been up yesterday as it normallywould, but I was enjoying my Labour Day off, with a good book, the balcony anda coffee.
So today we’ll talk about it. Mark Gatiss has (in the past) written areally good DOCTOR WHO episode (THE UNQUIET DEAD – S1), a quite creepy one (THEIDIOT LANTERN – S2), a rather action-packed but totally lackluster one (THELAZARUS EXPERIMENT – S3), and a fun but by-the-numbers Dalek one (VICTORY OFTHE DALEKS – S5), so while his track record isn’t perfect, it’s certainly quitegood.
The Series 6 episode he wrote, called NIGHT TERRORS, was thetype of episode I had wanted to see all season. An insular one, that was 99.9%Series-Arc Free, and that is exactly what we got. Was it perfect, nope. If Ihad to rank it amongst his episodes it probably falls somewhere in between THEUNQIET DEAD and THE IDIOT LANTERN, it had a few pacing issues and a few storyones but overall it was enjoyable.
As the father of tormented young George, Alex (amazinglywell-portrayed by Daniel Mays) is totally lost as to what to do about his sonbeing petrified of everything in his room once the lights have gone out atnight. That is until George unknowingly sends the Doctor a distress call on thePsychic Paper for help.
Probably first and foremost of my issue was that the “woodendoll monsters” that are meant to be creepy don’t really come off as such. They arecertainly strange looking, definitely abnormal and would likely scare the kiddieswatching, but as an adult who has seen the Weeping Angels and The Silents theykind of just don’t fit the whole “monster” category of DW. I think having theboy of the story, George, call out to the Doctor “Save me from the Monsters”therefore falls a bit flat when we actually see what’s going on. Was it thedesign of the creatures that flopped for me? I’m tempted to say yes simply because the idea ofsentient, unstoppable wooden dolls to me IS creepy, and I just didn’t feel ithere.
Aside from that, NIGHT TERRORS was actually a decent hour oftelly. It had action, humour, and best of all it had a nice message. A coupleof them actually. Right up front is the great message that children need, aboveand beyond all else, to learn to face their fears. This is something I ama big believer in. Like when your significant other wakes you up after hearinga noise in an empty home late at night. You have the same fears they do and youcan feel that cold slithering in your belly as much as they do. Butyou get up, grab something blunt and head out to inspect the rooms, closets,nooks and crannies anyways, otherwise you let the fear win. That is exactlywhat is going on at the root of NIGHT TERRORS, and in the end it ends up beingGeorge himself who will have to save himself from the Monsters. The second message in the episode is about parents making their children feel safe with them and that they won't ever be abandoned, no matter what. I'm sure parents watching identified with that as it hits at core heartstrings knowing that there are kids out there who don't have that kind of safety.
The Doctorshows a surprisingly interesting side here and some of the scenes where he isinteracting directly with George have a childlike wonder we haven’t seen inSmith since the first episode with young Amelia Pond. It’s nice to remind us that aboveall else, the Doctor IS there to help and he is a calming influence on anyone, especiallyif he’s sitting beside you tweaking his Sonic Screwdriver and making your toysmove about.
Amy and Rory don’t do too much here, as they fall into thesame perils as the rest of the side characters in the apartment block (Read: victim to the monsters), but theyboth DO provide a lot of the great comedic moments so it never felt like theywere wasted. In fact it was kind of a nice break for them after they’vebeen front and center for so long continuously. This one is pretty much TheDoctor, George and Alex and the dynamic there is quite thrilling and fun towatch, not needing anyone else to clutter it up.
Overall not brilliant, but a solid entry if not for therather weak and flat “monsters” within it. I think it would have worked betterif they were creepier, but I really can’t complain too much when I’ve beenlooking for an insular episode and I totally got one.
One other thing I‘d like to mention. I’m a big proponent of noticingthe smaller things within the episodes (whether they pertain to the narrativeor are just good special effects, like in the previous episode) and this one was no different. The apartment blockwhere the action takes place is at once simple, geometrical and colourful. Theydo a wide shot of it a few times and every time I couldn’t help thinking itlooks like a child’s playset. I haven’t the foggiest if that was intended ornot, but for me it was a lovely wide shot to look at in an otherwise dark,gloomy shot episode.  The otherthing I liked is that since this all takes place at night, when the sun comesup and the problems are solved it feels like it always did at the end of avampire movie – the daylight brings safety.
Stay Tuned: Next week’s episode THE GIRL WHO WAITED lookslike a real cracker!
Posted by GunMetalBlue at 6:11 AM

Email ThisBlogThis!Share to TwitterShare to FacebookShare to Pinterest
Labels: Doctor Who, Review