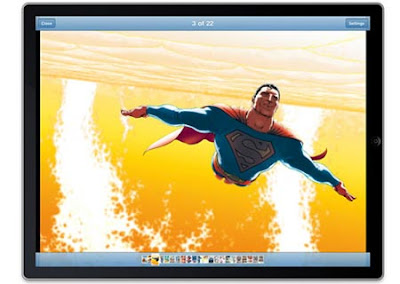 I was bopping around the Internet this morning, as I always do, and I happened to stumble on this post over at The Absorbascon which basically deals with the author’s decision to purchase an iPad for his comic book reading.

(You may remember my own ruminations on the subject a while back.)

I actually pulled the trigger on my ereader device of choice a couple weeks ago and bought an iPad for my comic bookery consumption and a second hand Kobo for more rough and tumble (commuting) book time.

Anyway, the Absorbascon post is eerie because so many of the thoughts there parallel my own thinking on the subject.

Perhaps it’s because I’m devouring Grant Morrison’s SUPERGODS right now that the issue of how we consume comic books is front and centre in my thinking meats. And nothing is more revolutionary for comic book readers than digital comics .

Over the course of two decades worth of collecting I’ve amassed boxes of comics that were fairly ho-hum to begin with but I just couldn’t get over the mental hump of getting rid of them. Now with the guest bedroom practically unusable I don’t have the luxury of bringing more middle of the road product in. In fact, over the last couple weeks I’ve been vigoursly pruning the lesser lights in my collection through a series of leave-behinds on my morning train ride.

(Seriously, I can’t give these things away. I’ve tried selling them for peanuts, and thrusting them on the kids of friends, family and coworkers and there are still no takers. I don’t know if kids just aren’t interested in the titles I’m offering or if the medium itself is so dated that reading comic books today is kind of like me being offered a fantastic selection of cave paintings back when I was a kid.)

Reading ecomics and their paper and staples cousins is a completely different experience. Once you strip out the nostalgia factor of the physical product, which is still a very powerful draw for me, you’re left with a medium that lets you focus more on the shape and artistry of the content rather than be distracted by the look and feel of the content delivery.

Ecomics aren’t quite movies, they’re not quite motion comics and they aren’t like traditional comic books either. They’re a strange hybrid of all three. The comic book app of choice, Comixology, lets you move from panel to panel with just the swipe of a finger. Readers are guided through the story without revealing anything of the surrounding panels. In contrast when reading a physical comic the entire page could drift into your visual periphery, destroying the mystery of upcoming story beats.

With ecomics artists who like to use sprawling unstructured pages might find they have to change their style, but on the whole I’m quite stunned by how much focused panel to panel reading adds to the comic book experience.

For the first time in my life I’m able to read an entire comic book without knowing anything about what’s going to happen next and the effect that has on my ability to enjoy the material is utterly remarkable.

It makes mediocre comics good and great comics spectacular, adding a whole new dimension to a medium that’s been mired in stasis and repetition.

So I’m getting out of floppies, at least on a going forward basis. It’ll be a big change for me; I haven’t missed New Comic Day for my wedding, honeymoon or birth of my daughter. Thankfully the DCU reboot provides the perfect jumping off point for me to make the switch. Rather then be victim to the collector’s scourge of always buying the same old titles, year in and year out, I’ve been afforded an unheralded opportunity where I can make a clean break with the past without feeling like I’m giving up anything.

Of all the factors involved in switching to digital, price is one of the least important variables. It’ll actually cost me more to read comics digitally. With my membership at the local comic shop I get 10% discount on new comics. And since ecomics cost the same as paper ones there’s really no financial incentive for me to make the switch.

So I’m going to give it a whirl. Who knows, in a couple weeks I might run screaming back to the shops and throw myself into the back issue bins in a fit of guilt and nostalgia, but after my initial test drive I just don’t think that’s going to happen.