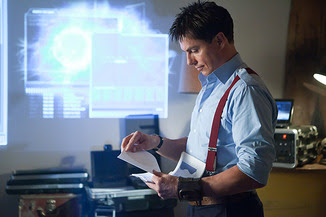 The problem with TORCHWOOD is that it manages to consistently fall flat on its face despite having so many good things going for it. I’m serious, its one of those shows I watch despite of itself, because it seems hell bent on sabotaging its own success.

Which is really asinine, because when you think about it, and let’s be honest I think about this kind of stuff far too much, as TORCHWOOD is broken down into its component parts its clear it’s got a lot going for it.

It’s sporting a dedicated showrunner with a proven track record, it’s carrying the banner of a proven nerd franchise with a ravenous fan base, a strong core cast in John Barrrowman and Eve Myles, a high concept story hook and Hollywood star wattage in Mekhi Phifer and Bill Pullman. With all these assets in their tool kit you’d think TORCHWOOD would have a better than average chance at making cult success. Instead the show has become shamefully unwatchable and made me into some sort of apologist in the process.

After every episode my wife turns to me and says “this is the show you’ve been waiting and raving about for so long?” And I’m left stammering and explaining with pitiful excuses like “its Captain Jack” and “but you should have seen CHILDREN OF EARTH?” We can all agree that CHILDREN OF EARTH was the show’s entertainment zenith, especially in comparison to the awkward fumbling that is MIRACLE DAY, but that doesn’t excuse the show’s meteoric fall from grace.

Because in spite of all the individual elements working it’s in its favour whenever the creators get together they apparently swirl these assets around to create a meal as unappealing as it is interesting.

TORCHWOOD first shot itself in the foot with its lacklustre pacing. After a passable premiere, which managed to set the stage for the season and introduce us to all the main characters, the show languished in a hellish swamp of needless exposition that must have killed any interest amongst casual or new fans. And when it finally got the point that TV is a visual medium where things actually happen it was too late. The narrative momentum was lost and it was impossible to muster the same enthusiasm for the show.

From a performance POV the American influence on TORCHWOOD is akin to hanging a millstone about its neck. For every Ernie Hudson or Marc Vann we have to take on Alexa Havins or a myriad of other performers more attractive than skilled.

(I mean seriously, if you were watching this week’s show did you catch the performance of the young woman playing the secretary? It may have been the smallest of day player roles but I was cringing when I had to watch her try to convince her boss that she’d been kidnapped by Torchwood. There’s wooden and then there’s petrified. I’ve heard tell that Hollywood is full of attractive people, surely there are some good actors as well?)

Budget seems to be a problem on the show as well. TORCHWOOD is a show rooted in big ideas and big sets and unfortunately the bulk of this season seems to be shot on repurposed industrial and commercial sets. Which means audiences are looking at lots of offices, sparsely decorated apartments and gloomily lit basements. TORCHWOOD needs strong visuals like human beings need oxygen, or some other overwrought analogy, and it’s hard to work up an interest in a show that too often looks like it was shot in the producers’ administrative offices.

Anyway, in this week’s episodes Torchwood fights back against the concentration camps, on both sides of the pond. Gwen manages to rescue her Dad, Rex gets revenge on the concentration camp director for killing his girlfriend and Jack does some digging into PhiCorp’s past. Jack’s conversation with the PhiCorp’s CEO seemed to play directly into my theory that the force behind Miracle Day is actually a sentient computer program (lotsa talk about ‘the system’ calling the shots) but the ‘scenes from next week’ segment at the end of the episode sort of poured cold water all over that.

As any FYI to any other viewers when I was at SDCC this year John Barrowman said that next week’s episode was the best TORCHWOOD material he had ever shot. He even guaranteed tears, so that’s something. Sadly, this season TORCHWOOD fans are all too familiar with tears and the gnashing of teeth.