Movie Review: Rise Of The Planet Of The Apes 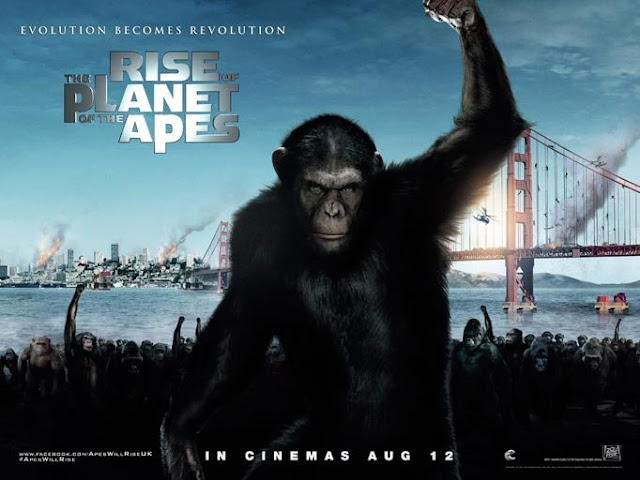 The first PLANET OF THE APES movie has always been a nostalgic treat for me. Since it came out in 1968 the first time I ever saw it was when it aired on TV when I was a kid in the 1980’s, but like a true sci-fi fan I loved it. Every time it was on, I watched it. Even once on Christmas Eve when I should have been watching Christmas specials...there was an Apes marathon and I watched. It was probably one of the earliest instances when I saw a film and recognized the social commentary within it. The idea that humanity had destroyed itself, and that Apes rose to take our place as the dominant species, only to eventually have its own brand of aggressors who unbalance things.
So I was considerably excited at the prospect of the new prequel film coming out that explained just how we (read: humanity) got to that breaking point where the Apes could overwhelm. RISE OF THE PLANET OF THE APES explores the very beginning of Apes becoming intelligent enough to throw off the shackles of oppressors, and how humanity also wanes in the process. It comes at things from an altruistic, and honorable (if misguided) notion that we can overcome Alzheimer’s by messing with nature and allowing the brain to repair its broken neural pathways. This drug is a technically a virus and while it makes the Apes super smart, it also effects mankind, and thus do we begin down the path to what will lead us to a future where the scales have flipped and human beings are the pets and Apes rule.
This film is an action adventure, it’s a Braveheart fight against oppressors, it’s a 1970’s disaster movie, with dashes of suspense thriller, and even dramatic emotion thrown in all cut out of a sci-fi film cloth. There is so much thought and style infused into the script that I was kind of stunned as I watched it unfold. Every beat here was carefully styled to get the maximum out of the scenes and the actors.
Franco is, as always very good…but here he even gets the emotions of his character right. John Lithgow is also suitably excellent as the Alzheimer-ridden father of Franco’s Will character and he plays both sides (cognizant and non-cognizant) with aplomb. The extended set of secondary characters are all really nicely acted as well, but Andy Serkis’ turn as original smart Ape Caesar absolutely STEALS the show. He chews up every scene he is in and makes this whole endeavor worthwhile. He’s probably 50% of what makes this a must-see film this summer.
I was so pleasantly surprised by the film that it makes me want to get out and see it again. Director Rupert Wyatt ought to be exceedingly proud of what he has created here. A film that both honours the original series, while it blazes its own trail explaining just how the planet eventually goes entirely to the Apes. Nothing feels hackneyed and even the numerous nods and winks to the original never feel tacked on but sit quite nicely within the narrative.
Do youself a favour. There have been 4 movies WORTH seeing this summer. THOR, X-MEN: FIRST CLASS, HARRY POTTER & THE DEATHLY HALLOWS P2, and now RISE OF THE PLANET OF THE APES. Go see it. It is worth every accolade it is earning.
Posted by GunMetalBlue at 7:30 AM

Email ThisBlogThis!Share to TwitterShare to FacebookShare to Pinterest
Labels: Review, Rise of the planet of the apes