Crackpot Doctor Who: Series 6 Returns! Is The Best Yet To Come? 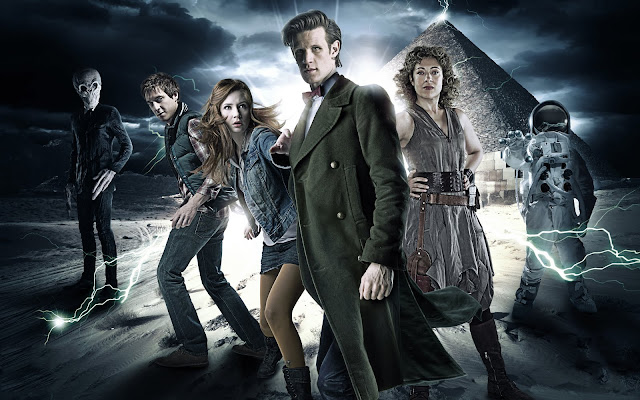 If you listened to our first Podcast over the past few days then you will know that Chris and I have talked, discussed, been annoyed by, thrilled by, frustrated by the first half of Series 6 of DOCTOR WHO.

Well, this weekend the Series will come back for the second half of its season, and it sounds like a few notable things will be happening and a few others merely hinted at. After having TORCHWOOD so entirely redeemed in my eyes by ONE episode (Episode 7), I find that my heart swells with the hope that DW will do the same. It’s not an “all is forgiven, give me back my WHO now please and I’ll be good” or anything, but I’d be lying if a few things I’ve heard about the forthcoming episodes, and some deep knowledge into the behind the scenes of the show’s previous seasons VIA Russell T. Davies & Ben Cook’s THE WRITER’S TALE (which I am currently reading) if I said I wasn’t a little hopeful.

So let’s start with the book. What I noticed first and foremost in the entirely readable book (chronicling Davies, Tennant and co.’s final full series and year of specials and what went into making them) is that the staggering amount of work involved in even getting a show like this to air. From week to week ideas are grandiose, but in the offing they get reduced by budget, scene editing, and script editing. It was strange to hear the amazing ideas that Davies had about each episode and what he wanted and then the reality of what could and couldn’t be done. Some complaints I might have had about certain episodes in Series 4 (for example) would be entirely washed away had they been filmed exactly how Davies and crew had envisioned them. The problem, a lot of the time, came down to budget. Sometimes episode budgets had to be cut by HALF. It kind of pisses me off in some respects because as awesome as Series 4 was, I am annoyed that the BBC didn’t give them more money to work with when the show was doing so well.

I go on and on, but the point of this is that the book really gives me major "how it's made" insight and that softens my stance somewhat on what Moffat is trying to do. Series 5 (as I stated in the podcast) was pretty damned fine throughout, but that Series 6 has real issues, and here is where I think we might be up for some hope, and the thing I’ve realized over the past few days:

Series 6 should NEVER have been split in two halves separated by the summer.

The wait is ridiculous and has basically alienated a number of fans who are not only feeling lackluster about stuff, but are left hanging on whether they are going to get paid off or not.

Perspective: Imagine if Series 4 had been split in two. You would have seen the amazing opener PARTNERS IN CRIME, the great but not mind blowing FIRES OF POMPEII, the interesting PLANET OF THE OOD and then the two-parter Sontaran THE POISON SKY & THE SONTARAN STRATAGEM which is lackluster to say the least (IMHO anyways). Then imagine there was a break for a few months, a totally pointless one. Would people would have tuned in come fall? Yeah but with probably a lot of the same problems I am having now with series 6. We would have had maybe 3 REALLY good episodes, and nothing of the overall story arc nods, with the exception of the quick Rose reveal at the end of 4.01. It would have pissed people off I think.

Now, let’s flip over to the second half of Series 4 shall we? When we come back it’s with the fantastic THE DOCTOR’S DAUGHTER, then the absolute blast that was THE UNICORN & THE WASP, followed by the incredible (Hugo Award nominated) two-parter THE SILENCE IN THE LIBRARY & THE FOREST OF THE DEAD, then the one two punch of MIDNIGHT (one of Davies BEST scripts, and Tennant’s BEST performances) and then TURN LEFT (which launched us into the ending episodes for the series and showed Catherine Tate’s incredible acting chops), and we cap off the season with the fan-nod-heavy, everything and the kitchen sink (but still totally excellent) THE STOLEN EARTH & JOURNEY’S END.

See anything there? Any trends? If you look at the first half of Series 4, it’s good, but not mind blowing (yet…) and the BEST of the series are in the second half where things are ramping up to the ending. This is not something that only happened in Series 4, you can apply it to both Series 3 and Series 2 with the same results.

So I think perhaps we’ve been unfair on Moffat so far in Series 6 and the culprit, and direction of our ire, ought to be whoever decided it was a bright idea (probably someone at the BBC) to split Series 6. If it hadn’t happened I still wouldn’t have enjoyed A GOOD MAN GOES TO WAR much, but if LET’S KILL HITLER had aired the following week and so on and so forth continuing the rest of the series I would not have had the chance to formulate my opinion of a lackluster Series 6 (so far), as I would have gone running right into the rest of the episodes from week to week and perhaps the best episodes DO reside in the second half of Series 6.

So it is that I am hopeful, and of course will be chiming in early next week on what I think after WHO returns on Saturday night. The offshoot of this whole thing is it has given me not only insight into the work that goes into getting WHO on the air, but also other TV shows and so I’ve decided not to be as harsh. Especially on the Internet, as it can seem like piling on to those involved. This doesn’t mean I’m going to stop telling you what things I like and don’t, but I do think I’ll try to be as balanced in my TV reviews as I am in the book ones.

So let’s get to some of the forthcoming stuff. The long green coat the Doctor is wearing in promo material for the second half of Series 6 is apparently going to be new standard garb, which I am cool with cause all the coolest Doctor’s have had long coats. It always looks great when they are running flying out behind them. Good stuff.

The bigger rumor is that Rose, Martha and Donna all show up in some format (in LET'S KILL HITLER) and the notion is that they are there “to help” the Doctor. Whether that means short cameo’s by the actors, or as holograms or video's or some other cameo I don’t know and can’t speculate. That said apparently there were some Twitter’s by people who had seen early screenings of LET’S KILL HITLER and made cryptic statements like “I don’t want to spoil anything, but They’re Back!”…which could be anything from the Daleks or Cybermen to the aforementioned cameo’s by the previous companions. One thing should be noted: If Rose Tyler shows up I will cheer like some sort of insane madman and following that with Donna…what an amazing idea. What no Mickey?

The last episodes of the series will apparently be called THE WEDDING OF RIVER SONG, and while I have attitude about the character (who I feel they spend too much time on), I am interested to see what happens and we’ve had confirmation that we will be told everything about the Doctor’s death on that Beach from 6.01 and that will be resolved as will everything about the Song mysteries (who she killed ect.), so at the very least it seems like we will have a clean slate going into Series 7 (or a mostly clean one). There’s rumors about who the new companion will be in Series 7 (as it sounds as if the Ponds will take a more earthbound helperly role) but I don’t want to get into that since previous early companion guesses have turned out to be silly.

Some good stuff on the horizon and yeah as I careen towards the weekend I find myself more forgiving of Moffat’s current WHO series and hope that our MIDNIGHT’S, SILENCE IN THE LIBRARY'S and JOURNEY’S END’S are yet to come.

Series 6 of DOCTOR WHO returns on Saturday August 27th, 2011 with LET'S KILL HITLER.

Posted by GunMetalBlue at 7:47 AM