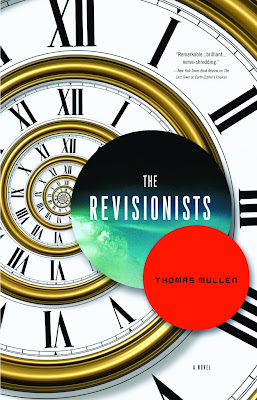 Terrorists, known as hags, are being sent back in time to prevent humanity’s greatest tragedies from occurring. But their misguided actions could ruin the perfect peaceful society that exists in the future. These disasters are key moments upon which this near Orwellian utopia will be built and they must be protected from interference.

Working for the Department of Historical Integrity, Troy’s beat covers Washington D.C. at the beginning of the 21st century. The town is a cross section of the world’s most influential people; foreign diplomats, ruthless businessmen, cagey intelligence agencies and private contractors all stalk the halls of power, a dangerous powder keg and an almost impossible temptation for anyone looking to change the course of history.

Tasha Wilson is a corporate lawyer having trouble with her conscience.

When Tasha’s brother dies in combat in Iraq she begins to question the work she does representing large faceless multinationals, who seem more concerned with protecting their bottom line than in protecting soldiers. Adrift and searching for meaning in her life she falls in with a group of radical activists who are seeking to bring the actions of these corporations under public scrutiny. Tempted by the thought of doing something positive with her life, Tasha leaks confidential information about a client to a newspaper reporter, putting her on a collision course with some dangerous Washington players.

Leo Hastings is a disgraced CIA agent making a living off of the government’s scraps.

Forced to ride a desk in the private sector Leo seems destined to spend the rest of his days researching internet cranks and low level threats. But when a chance encounter lands a prize asset in his lap he knows that this might finally be the leverage he needs to make him a player in the intelligence field again. .

I don’t think I’ve ever used the terms ‘heartbreaking’ and ‘searing’ in a review before. Be that as it may, THE REVISIONISTS is completely deserving of such praise, and more. It’s quite simply one of the best books I’ve read this year.
Sporting a slow burning set up, with a high stakes finish, the book lured me in with its promises of sci-fi derring-do but kept me hooked with its insightful and compelling character examinations.

And make no mistake, cover blurbs aside, this book lives and dies by the way author Thomas Mullen gets into the head of his characters. Set against the here and now backdrop of Washington D.C.’s hangover after nearly a decade of fighting wars in the Middle East, the book attempts to come to terms with the changing personality of a country who once purported to be the poster child for the free world. Mullen crafts personalities as mercurial as the times they purport to live in. There are no two dimensional straw men here. Instead Mullen dives into the contradictory nature of human beings, how our actions seldom live up to our ideals and how the people we become and seldom the people we set out to be.

Rich themes populate this story like wedding guests at an open bar, but none is more prevalent than the corrupting nature of knowledge. Eschewing easy answers for complex problems THE REVISIONISTS is a morality tale at its heart, a warning posted on the front of the mummy’s tomb that the endless search for information has a terrible price. Because, like Eve munching on an apple from the tree of knowledge, intelligence warps and corrupts the very people who acquire it. And once you obtain a new piece of information you are forever changed by it.

In the Orwellian future of Troy Jones this warning is made manifest. Knowledge is such a corrupting influence that access to historical records is forbidden, so that ancient grudges and conflicts might be forgotten. When family members pass away the government removes all trace of their existence, except for your memories, so that its citizens will not stay mired in the past that no longer exists.

When Troy travels to the early 21st century this overreaction seems quite reasonable. Here Troy observes nations and their peoples prepared to perpetuate the worst possible atrocities upon each other because they are unable to forget the transgressions of the past. To those that would misuse knowledge, ignorance would be more blessing than curse.

Throughout the book Mullen’s characters are forced into a state of near perpetual self examination as the information they come by begins to warp their very identity. Clarity and strength of purpose is lost until only confusion and chaos remains.

Mullen weaves together the seemingly disparate plotlines of these characters into a single cohesive narrative with style and grace. Sporting more than just a little William Gibson in his writerly DNA Mullen understands that the most interesting speculative fiction, which is what I guess we’re calling this stuff now, works best when the genre pageantry is left to lurk in the background and not dictating the plot beats of the story.