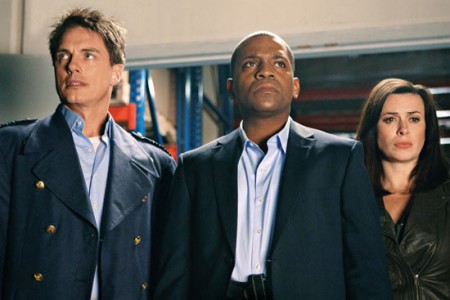 Okay, let’s talk about TORCHWOOD: MIRACLE DAY.
Am I excited that TW is back? Yes. Am I excited that there is an RTD and Julie Gardner production on the TV again? Hell yes.  Was the first episode of TW: MD great? Yes and no.
Overall it was a decent enough intro to a new season, but you can certainly tell that this is not going to be the pressure cooker of awesomeness that last seasons’ CHILDREN OF THE EARTH was from the outset. It’s a slower setup this time. That’s not a bad thing, but it just felt different. Jack, Gwen and Rhys are back in fine form and Harkness especially seems to be maintaining a rather surly disposition (likely due to what he had to do in the last season) that I liked. Picture Jack circa the series 2 episode titled ADRIFT when Jack is being secretive about a facility to Gwen who keeps pushing him on it. The pace is speedier in the second half and the first half has more of the random info about no one dying, but it does kind of beat that horse to death for a half hour. It’s hard to unify the two sides/stories of the Atlantic, as when Phifer shows up in Wales and confronts Gwen and Rhys I couldn’t help thinking that the Esther character would have worked better, in perhaps a way that had her not realizing just who she was going to see and why (on orders from Rex maybe). Rex Matheson on his personal one-man mission was...over-the-top to me. That’s a personal complaint though.
So, the episode is entertaining and though it doesn’t give us too much to work with plotwise beyond the main macguffin, it certainly gives us stuff to look forward to. It was nice to hear Murray Gold’s Torchwood score again and nice to see RTD-isms within the narrative. I should also note that watching this episode, even though it had some problems, was oodles better than most of this season of DOCTOR WHO…if that tells you anything.
The newbies:


Esther Drummond (CIA) - played by Alexa Havins was suitably interesting and kind of a version of Gwen pre-Torchwood, up to including Jack drugging her with a Retcon pill. Nice touch that.
Oswald Danes (criminal on death row) - played by Bill Pullman is totally creepy and messed up. I am fully of the belief that if there's one role trope Pullman can always pull off it's "creepy".
Dr. Vera Juarez (doctor at a hospital where she notices no one dying) - played by Arlene Tur. Here is a new medical person to add to the team in the future methinks. Which is good since no one wants to see Martha Jones return. Tur was good in her small role in this first ep. Interested to see where she goes.
Now, onto some issues I had.
Problem #1: Mekhi Phifer. Dude…the overacting of this guy in the first episode was like watching an excited 12-year old in the school play attempting to portray Mercutio and only managing to pull off Paris Hilton. Seriously. His acting was AWFUL. Every other new character successfully did their level best to come into this new world but Phifer was just bad. He better up his acting game in the next few episodes if he’s going to win any fans. I’m going off thinking of his wound and pain making him overact (or seem like overacting) and once that calms down we might see more of Phifer circa E.R. as we KNOW he can act. I hope at any rate, cause I don't know how much more overacting Mekhi I can take.
Problem #2: So much time is spent on setting up and joining the various plotlines that when it all comes together in the final resolution, the scene comes out of nowhere and seems totally out of place. You have Matheson as CIA agent just getting on a plane and flying to Cardiff and finding Gwen easy peasy…Beyond that the entire point of that final scene hinges on the aforementioned Phifer delivering his lines well and since he doesn't it just comes off as strange and rushed. The Cardiff Police show up (3 cars)…Jack & Co. surrender. Not really that “Torchwood” of them (Ianto, Toshiko and Owen would probably be ashamed), but I digress.
While not the best season opener, it is still leaps and bounds better than a lot of the tripe that’s on TV right now and you’d be doing yourself a big favour to get into this show now so you don’t have to catch up later.
Enjoyed it mostly, but I am waiting for the show to WOW me like the 3rd season did.
Posted by GunMetalBlue at 12:45 PM