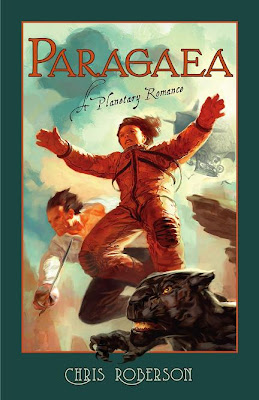 Cosmonaut Akilina ‘Leena’ Chirkov has a problem. One moment she’s orbiting Earth in a Russian spacecraft and the next she’s crash landing on the planet Paragaea, filled with strange creatures and swashbuckling 19th century English sailors.

Not one to dwell on something as daunting as being trapped on a alien world Leena recruits Hieronymous Bonaventure of the Royal Navy and the exiled jaguar king Balam to help her return to Earth.

Leena’s quest to find Earth takes her across Paragaea, from the airships of Laxaria, to the lost caverns of the undying Benu and inside the forbidden citadel city of Atla.

And although Leena’s desire to return home never wavers she can’t help but get caught up in the mysteries and wonders of Paragaea.

Leena is forced to make a choice, do her duty by returning home to a cold, inhospitable country that would rather do without her or indulge herself by staying with the only people who have ever shown her friendship and warmth.

Chris Roberson clearly owed the world of FLASH GORDON a nod of thanks when conceiving this story. Riffing on the roguish heroes, bizarre animal-men, mad scientists and strange lands that populated the old comic book, radio and television serials Roberson creates a lush and vibrant world, spurned on apparently by an unfettered imagination and a childhood well spent consuming pulp sci-fi.

PARAGAEA is easily the kind of kind of book that I could get behind if I was twenty years younger. I’m not sure if a story nearly 400 pages long is meant to be marketed toward the YA audience, but then again I’ve seen tweens lugging around the ponderous tomes of HARRY POTTER and TWILIGHT so clearly size should never be used as a measurement of reader accessibility.

I was initially encouraged by Roberson’s choice to avoid having a lantern jawed Western hero as the lead character. Using a female Russian cosmonaut was a take on the genre that I don’t think I’ve seen replicated very often in this type of adventure fantasy.

Unfortunately PARAGAEA doesn’t always make good use of its promising premise. Its essential problem is that Roberson has simply packed the story with too many fantasy tropes and forgotten to spend enough time with the characters who inhabit this rich world. It’s like he packed 70 years of FLASH GORDON history into a blunderbuss and shot it onto a page. Every chapter either introduces us to some exotic locale, a unique character or a mystical object of power that should be explored.

But the problem is when everything and everyone you meet is amazing, spectacular and one-of-a-kind, it robs the story of its wow factor.

It’s like having ice cream for breakfast, lunch and dinner. Ice cream is pretty damn spectacular until it’s all you can eat. After awhile you might find yourself yearning for a bowl of Wheaties, or maybe even a vegetable or two*.

What frustrated me about this book is that so much emphasis was put on the sizzle that it seems like the steak was forgotten.**

In Leena, Bonaventure and Balam Roberson has created genuinely interested characters with provoking backstories but fails to effectively capitalize on all the potential drama at his fingertips. He contents himself with dropping them into a series of increasingly unlikely scenarios, which our main heroes always escape from unscathed, and hoping the conflicts therein will reveal more about his characters’ personalities.

Instead it makes the character feels like tourists on Paragaea, passing through it, but never truly enjoying the wonders the planet has to offer.

I wanted to know more about these three adventurers then just an obligatory chapter about their own personal histories. I wanted conflict, drama and to stop and explore some of the scenery that Roberson sets up, but instead I was treated to a repetitive diet of swashbuckling and bravado.

If you’re interested in action and adventure with a side of science fiction and romance then this book is for you. In fact, I’d highly recommend it for those aforementioned tweener types as Roberson does a great job in painting a picture of a strikingly beautiful and alien world.

But if what you’re looking for is something more adult and mature then I’d probably give this book a pass. PARAGAEA is definitely not fluff, but it also lacks the essential boldness to take us to places we can’t get to on our own.

*This is a damn dirty lie, but the point remains nonetheless.

** never write a review over lunch.