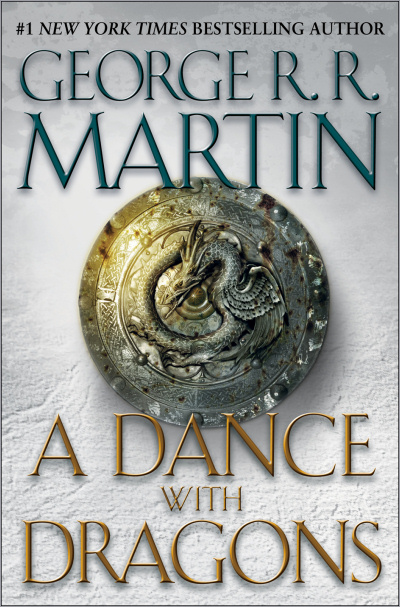 Well it took me just under a week but I finished A DANCE WITH DRAGONS (5th book in GEORGE R. R. MARTIN’S A SONG OF ICE AND FIRE SERIES) on Sunday morning and decided not to write my review till today since I wanted to spend a day thinking about it first.
It was requested that I try my best to avoid spoilers in this review and I fully plan to do that. So if you are concerned I will not be spoiling any major plot points, or even smaller plot points. I will however mention broader scope things and I am going on the assumption that if you are reading this review then you have read books 1-4. So, there you have been duly informed.
So how about the book. Did I enjoy it? Yes and no (AKA mixed feelings). Am I surprised that is my reaction to it? Not at all. In fact I fully expected to feel this way.
Let’s start with the structure and length. The book clocks in at around 950 pages hardcover (not including maps and house name list pages) and of that about 600 pages is spent bringing the POV’s that were absent from AFFC up to the same end-point. This equates to characters like Jon Snow, Tyrion Lannister and Daenerys Targaryen killing time. The first 600 pages could be called “Holding Pattern Till We Catch Up”, and while Martin throws in some good solid stuff and a few major twists it really does feel like a bit of a slog for large chunks. It’s nice to have new or hidden-new POV’s like Reek, Varamyr Sixskins, and Melisandre in the book bringing a fresh view into the proceedings but people like Davos Seaworth who I never really cared much for (and who existed previously as a POV window onto Stannis Baratheon) are simply boring. He has one chapter where something interesting happens, but mostly it adds up to a lot of travelling and trying to get Northern lords to bend the knee to Stannis.
There is, it should be noted, one MAJOR development in the first half of the book that could be considered a game changer. Just an FYI.
For this first section the book spends time with our main characters doing things that CAN be interesting but get overdrawn. This book is largely about good people attempting to rule in good and honest ways whilst Martin shows us that even good can produce bad, and in some cases evil. That’s a great thing and a wonderful juxtaposition to the events in the South from AFFC with generally bad people doing bad things. It would be great…in another book. This is a book we were waiting six years for and while it’s nice to show us this I feel like it didn’t need 600 pages worth of material devoted to it. Certain things, especially in Tyrion and Daenerys’ storylines by page 500, feel like overkill. It had me thinking “Okay, I get it George…can we move along please?” Is this an awful thing? No, but it got a tad tedious and had the rest of the book not delivered I’d be upset.

That said, Bran's storyline throughout the entirety of those 600 pages IS totally interesting and enthralling and almost better than Jon Snow's chapters. So there's that.
Thankfully, the final 350-ish pages are nearly completely win. In fact there is a discernable moment (a chapter of events in the Sunspear on Dorne) in the volume where we move on from AFFC and things move forward. Characters from AFFC (Cersei, Jaime, Arya ect.) show back up and this barge of a book turns into a speedboat, as Martin leaves the doldrums behind and gets to the goods.
The latter quarter of the book is full of setup for the next book and people move into positions where the tension is palpable and events happen that cannot seemingly be undone producing some surprising results. There are also events that staggered my brain with their revelations and those are always good. Are there cliffhangers you ask? GALORE. Nearly the entirety of the last 100 pages is cliffhangers, a few stronger than others, but enough to keep people guessing and coming back when the next book drops.

(Insert joke about how long that will take here)
The final 350 pages made the read satisfying but the first 600 can be a bit of a chore to slog through to get to the good stuff. It’s like having to eat a middling dinner with 3 items you dislike and one you do….to get to eat the luscious, yummy dessert. I think the main problem lies with two issues: Firstly,  splitting the book (AFFC and ADWD) VIA POV instead of mid-story was a HUGE mistake. I think I would have preferred it the other way round and the fact that he did that presented a logistics problem with time and progression. So by doing that he HAD to create 600 pages of “holding pattern” before he moved things on. IMHO that was a mistake. This brings me to the second issue:  You could actually have covered the events in both AFFC and ADWD in one book, easily. In fact, I used to say that as long as ADWD made the split in POV make sense then I would forgive it, but it just doesn’t. What actually happens in both AFFC and ADWD (first 600 pages) could have been totally covered in about 800-900 pages total…making a tighter narrative that got the same points across. I only hope that the Book4-5 fiasco does not continue to mar the series with long waits and humdrum filler.
I don't mean to sound as if I am being unnecessarily harsh here. That's not my intention, as I enjoyed visiting this world again and Martin's prose is as good as it ever was. I read it rather voraciously for like 5 days, I just don't find it perfect. It IS however, SCADS better than AFFC if only because it concerns more interesting characters and a lot of the action takes place outside Westeros and that made it have a really nice global flavour. Still a solid read, and it totally delivers in the end.
That said, with things now moving forward at a fast pace the next book THE WINDS Of WINTER can hopefully get back to the great style of the first 3 books which are still amazing. I can hope.
If you read this book it will be for those final 350 pages. The first 600 have some interesting info and a few good developments but overall it’s filler-ish with a rather disappointing Tyrion arc actually. The end of the book is all LIGHTNING….while the first half is all sound and fury signifying…well you get the picture.
It totally delivers in the end and makes the wait worth it, I'm just glad that the AFFC/ADWD timeline/holding pattern stuff is over now and hopefully it's going to be all cream from here on out.
Posted by GunMetalBlue at 6:46 AM